Who would most likely own a unicorn onesie and get made fun of by others for the next twenty years?

I have noticed that in the newer books that Riordan has written there have been alot more LGBTQ+ characters. In the original series the only one that was part of that community was Nico and we didn't find out about it until the Heroes of Olympus series. Has anyone else noticed that?

Hello so I was wondering if anybody can rewrite the piper Personality page. It’s not letting me and no offense to the writer of that page but it’s extremely biased and not factual. I understand that a lot of people don’t like piper and you have your reasons but when writing the page I think it’s important to not be biased.

I'm curious why some of you guys think Bianca had so much potential. Wouldn't Nico have the same amount? Is it because she's older or some other reason? Because I would think Nico and Bianca would have the same strengths. Though I don't know if you some of you guys mean she would be more powerful than Nico or not. Just from reading the comments how I read them is she had so much potential.

So, we all know Aeolus the god who made his first appearance in The Lost Hero. But, I’m still not certain about his title. The RV has different titles for him.

“Oh, thank goodness!” Aeolus sighed with relief. “It’s been what, three thousand years since Zeus made me master of the winds. Not that I’m ungrateful, of course! But really, my contract is so vague. Obviously I’m immortal, but ‘master of the winds.’ What does that mean? Am I a nature spirit? A demigod? A god? I want to be god of the winds, because the benefits are so much better. Can we start with that?” -The Lost Hero.

“I tried not to look nauseous. I’d heard Apollo’s poetry before, and if his music was even half as bad, this concert was going to blow harder than Aeolus the wind god.” -Percy Jackson and the Singer of Apollo.

So what’s up? What do we use? Does Percy just acknowledge that Aeolus is the master of winds but just calls him a god due to his immortal status? Is he just referring to Aeolus as one of the wind gods? Did Riordan just use ‘master of the winds’ for Aeolus’ role in The Lost Hero? What do you think? Is Aeolus the ‘master’, ‘god’, or ‘keeper’?

Discuss Everything About Riordan Wiki | Fandomriordan.fandom.com

Thank you, and have a nice time on the Riordan Wiki.

If you actually could be a child of a God which god would you want to be your parent?

The man, the myth, the legend. The leading man. I’ll bet that PJO was the first Riordan series that most people have read on this wiki.

I think Percy is an ESFP. That stands for Extroverted, Sensing, Feeling, and Perceiving. People with ESFP personality types are often described as spontaneous, resourceful, and outgoing. They love being the center of attention and are often described as entertainers or “class clowns.” This pretty much sums up Percy for me.

If you’ve watched Titanic, you’ll know who Jack Dawson is. He’s also an ESFP. I can also picture this really well cause I have another friend who’s an ESFP. He’s a really social guy who’s a lot of fun and easygoing. That’s how I picture Percy.

There’s nothing that makes Entertainers feel quite as unhappy as realizing that they are boxed in by circumstance, unable to join their friends.

Extroverts are social beings. They thrive off of other people. They lean towards taking the initiative and they require other people’s validation. Extroverts can put too much value in their engagements with others. Boredom also comes easily for extroverts when they are alone. This can cause them to do things spontaneously and for the sole purpose of entertainment. Extroverts also have the drive and ambition to be a leader. Their outgoing personality makes them extremely likable. It’s kind of hard not to enjoy their presence.

87% of Extraverts believe they have what it takes to be a good leader, compared to 56% of Introverts.

Sensors are very in the moment people. It’s not to say that they don’t think about the past or future because everyone does, but they aren’t so worried about what could happen. They’re more focused on what’s in front of them in the moment. They use the past and the future to help them to determine what to do right now, in the moment. They root their thinking in the actionable, tangible, and useful. Just because they seem very straight forward doesn’t mean that they can’t be creative because they definitely can. Sensors can seem narrow minded. They may reject something that seems to far fetched or that doesn’t make sense to them. Sensors have a lot of initiative. They don’t just sit around thinking, “What if?”. They want thoughts and talk that lead to action.

These practical individuals are the ‘doers’ of society.

Feelers tend to follow their heart; not their head. They have a strong emotional value. They tend to be warm, caring, and considerate. They can be very protective of their loved ones. Once they take it too far, it can be annoying. They can get too emotionally attached and they can cause burnout to themselves and others. Because of their selfless spirit, they can become depressed if they feel as though they haven’t done enough for everybody. A feelers concern for others can also be a good thing. It shows their loved ones that they do care, which can prolong any relationships such as family, friends, and lovers. Their reliance on feeling doesn’t mean that there isn’t any logic. In fact, their feeling is just a different type of logic. In the end, their big question is, “Who can this help?”.

For those with the Feeling trait, decisions tend to be based on the well-being of others.

Prospectors are very flexible when it comes to change. They can adapt very quickly to many things and they tend to react to their environment rather than trying to control it. This can make them seem more relaxed. People with this trait believe that life is full of endless possibilities. All of the flexibility that they have in decision making can lead to impulsive decision making. People with this trait like to have as many possibilities as possible and this can have them making decisions slowly because they want to consider all the other options. Indecision can be a huge problem. This can make them seem unfocused. Despite these concerns, they can be very creative. There’s like a never ending stream of new ideas and improvements that can be made. This can be an amazing tool for finding solutions.

When a passion takes them, there’s no masking a Prospecting type’s excitement.

If you don’t know what cognitive functions are (which you probably don’t), here’s a video explaining them. 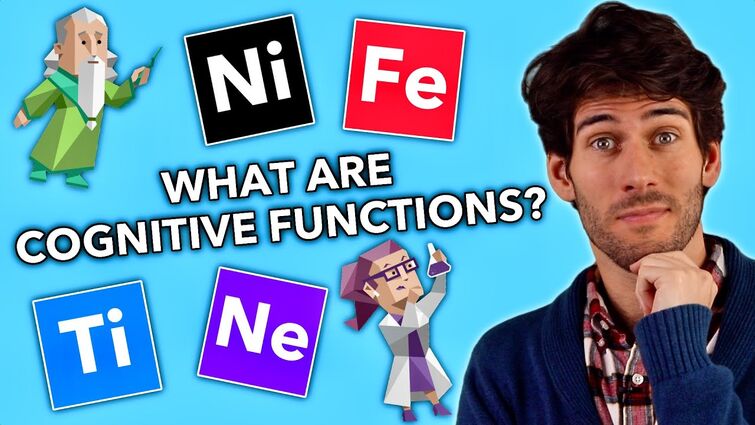 Also check out his channel if you have any questions cause he really helped me understand a lot when I first started MBTI.

The 4 Cognitive Functions for the ESFP are:

That’s it! YUP I’M DONE!!! Thanks for reading all the way until the end if you did. I hope you enjoyed my article about Peter Johnson. If you think there’s another MBTI that he could be, just tell me cause I would love to hear your thoughts!!!

P.S. I’m an ESTJ if your wondering

Which Demigod would most likely accidentetly tell someone they don't know, " I love you"?

(This would be one heck of an awkward conversation, lmao)

So, I realized something: Most of the time if you get a quest you must find something stolen or free something, right? But Luke not. Luke had to steal something, a golden apple, right? And, there is another demigod you probably don’t remember, and that’s Gus.

He was mentioned just once in the books. And he stole something as well.

And you know what? They are both children of Hermes, the god of thieves. Is that a coincidence? 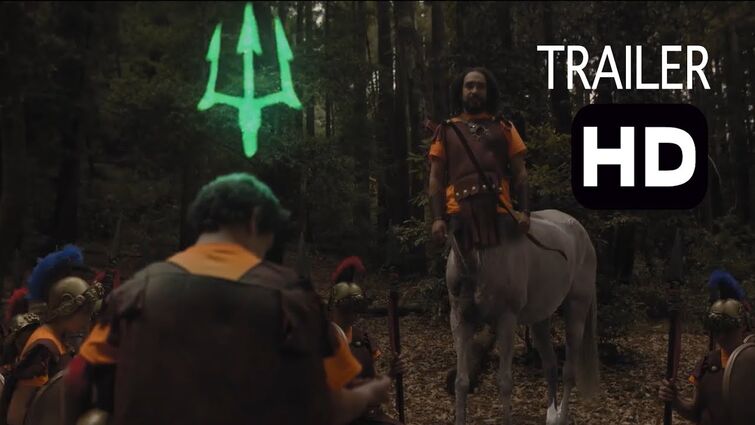 89: Apollo once recorded and posted a video of Ares falling and breaking his tailbone while failing to do a roundhouse kick.

90: Athena is a Scrabble master, winning every time the gods play and once causing Zeus to smite off the top of Mount Parnassus with her play abaxial in a game they had.

91: Apollo has had approximately 33 mortal girlfriends and 11 mortal boyfriends, although he’s mostly lost count by The Hidden Oracle.

92: Apollo still remembers the day he was born. 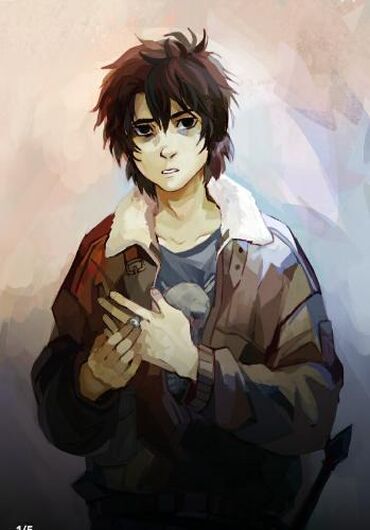 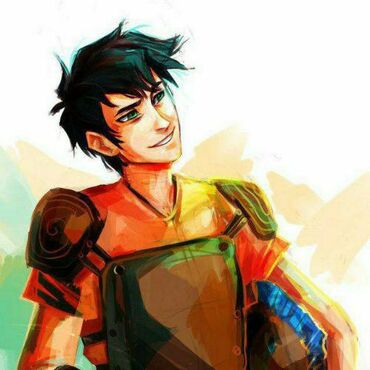 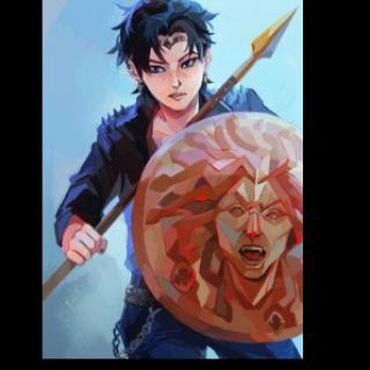 The winner of the last round is:

For Travis Stoll; "Trail vs lost" or "All toss it VR!" and

I decided to scratch the ‘my personal favourite’. i just alway link to the

Also I decided to add all characters I have already made

If you want to take the test for yourself and want to compare your results with a characters here’s the link.

If you read all the way until the end, thank you so much! I hope you enjoy it!

He's cool, His development was nice, he played a big role in Percy's development imo. Some people disagree but, I think going from just another Peter Johnson to Percy Jackson was definetely a stepping stone. A lot of people think he's funny but I don't get his humour, I understamd why some people might. I have a friend who read the first book and said Mr. D was They're favourite character so I know some people like his humour. Yeah, thats pretty much it, what do you think. I know it's early, but, I am going on a trip for the weekend so yeah

First off I’d just want to say, and maybe it’s bad that I have to clarify lol but I’m not against people who are in the LGBTQ community. But I’d also like to mention I’m not in that community (at least I think I’m not…) and this is why I’m writing this to try to understand. All I would like to say is did Rick Riordan when he started writing Nico’s character knew Nico would be gay? But he was young (nico I mean) so maybe Nico didn’t know yet, but for me… (is there signs you can tell in other people? Idk? Nico is pretty closed off though but yeah idk) I don’t think Rick knew yet. But maybe he did I would want to know what you all think. Basically in the end it doesn’t really matter, and I don’t really know.

In the moment, I was shocked and I was like wait what just happened. If there are signs I didn’t notice. Maybe I’m not the smartest because I didn’t see nothing. Second, do some of you guys like Nico before he turned out to be gay. And again maybe it’s just me, but as someone who’s Asian I tend to like Asian characters. (I.e Cho Chang, Awkafina (movies Lana Condor is in etc.) idk why. I mean even if they aren’t my favourite I like them still. Anyway, do some of you guys who are in the LGBTQ community like Nico more solely because he turned out it be Gay? He’s a good character so I’d get it if not. (Personally, I like his closed off personality.) I’m just wondering if some of you guys if you think about it, like him because of that reason, or like him a little more because of that reason. Thanks for answering. (Again, no hate lol)

Which demigod will read your text, Tell themselve's that they will text you later, fall back to sleep, forget about your text and end up never responding to it.