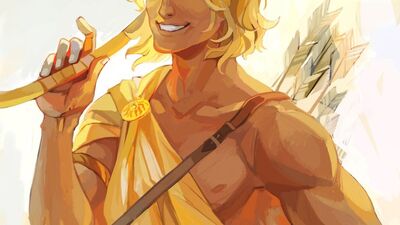 Apollo (Apollon), known as Lester Papadopoulos in his most recent human form and the Trials of Apollo, is the Greek god of the sun, light, healing, disease, plague, music, art, poetry, archery, reason, knowledge, truth, and prophecy. He is the twin brother of the goddess Artemis, and they are... 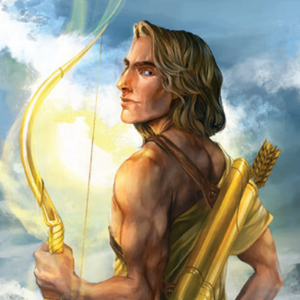 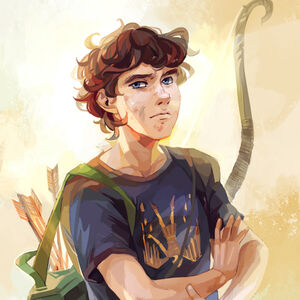 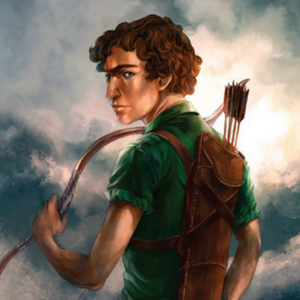 Here are the results

Day 1:Luke makes a slingshot. Magnus Chase forces Lester Papadopolous to kill Meg or Chiron. He decides to kill Meg. Calypso constructs a shack. Rachel receives an explosive from an unknown sponsor. Alex Fierro attacks Will, but he manages to escape. Hearthstone runs away from Frank. Thalia discovers a river. Percy, Grover, and Loki hunt for other tributes. Jack the sword injures himself. Coach Hedge, Annabeth, Nico, Tyson, and Hazel hunt for other tributes. Reyna makes a slingshot. Leo receives clean water from an unknown sponsor.2 cannon shots can be heard in the distance.

Not meg. why did she die first?

Night 1:Jack the sword cooks his food before putting his fire out. Hazel dies from hypothermia. Grover tends to Leo's wounds. Calypso is unable to convince Coach Hedge to not kill her. Chiron receives a hatchet from an unknown sponsor. Reyna sees a fire but stays hidden. Alex Fierro sees a fire but stays hidden. Nico, Thalia, Percy, Will, and Lester Papadopolous sleep in shifts. Rachel destroys Luke's supplies while he is asleep. Tyson convinces Hearthstone to snuggle with him. Frank sets up camp for the night. Annabeth thinks about home. Magnus Chase bashes Loki's head in with a mace.

Day 2:Reyna chases Grover. Thalia thinks about home. Alex Fierro camouflages herself in the bushes. Rachel and Tyson work together for the day.Jack the sword's trap kills Hearthstone. Luke fishes. Magnus Chase makes a wooden spear. Chiron receives an explosive from an unknown sponsor. Frank diverts Leo's attention and runs away. Lester Papadopolous makes a slingshot. Will tries to sleep through the entire day. Annabeth sprains her ankle while running away from Coach Hedge. Percy and Nico hunt for other tributes.

Night 2:Luke thinks about winning. Frank shoots a poisonous blow dart into Will's neck, slowly killing him. Leo loses sight of where he is. Lester Papadopolous and Magnus Chase hold hands. Rachel climbs a tree to rest. Chiron defeats Tyson in a fight but spares his life. Grover quietly hums. Reyna lets Alex Fierro into her shelter. Thalia tries to treat her infection. Coach Hedge loses sight of where he is. Nico, Jack the sword, Annabeth, and Percy sleep in shifts.

Night 3:Lester Papadopolous thinks about winning.Magnus Chase and Percy talk about the tributes still alive. Leo goes to sleep. Reyna quietly hums. Luke climbs a tree to rest. Jack the sword, Coach Hedge, and Frank discuss the games and what might happen in the morning. Alex Fierro loses sight of where she is. Thalia fends Tyson, Grover, and Rachel away from her fire. Chiron severely injures Annabeth and leaves her to die.

Day 4: Tyson and Thalia hunt for other tributes.Chiron and Frank hunt for other tributes. Alex Fierro picks flowers. Grover steals from Reyna while she isn't looking. Lester Papadopolous sees smoke rising in the distance, but decides not to investigate. Magnus Chase explores the arena. Luke scares Coach Hedge off. Rachel practices her archery. Jack the sword makes a wooden spear. Percy receives medical supplies from an unknown sponsor. Leo discovers a river.

Day 5:Grover questions his sanity.Leo defeats Coach Hedge in a fight but spares his life.Chiron injures himself.Percy, Jack the sword, and Rachel successfully ambush and kill Thalia, Lester Papadopolous, and Magnus Chase.Luke sprains his ankle while running away from Alex Fierro.Tyson receives fresh food from an unknown sponsor.Reyna picks flowers.Frank practices his archery

Night 5:Grover loses sight of where he is. Luke tends to Jack the sword's wounds. Percy questions his sanity. Rachel attempts to start a fire but is unsuccessful.Tyson sets an explosive off, killing Chiron, Leo, and Coach Hedge. Frank receives a hatchet from an unknown sponsor. Alex Fierro and Reyna sleep-in shifts

Jack the sword lets Frank into his shelter. Luke cannot handle the circumstances and commits suicide. Percy and Grover tell stories about themselves to each other

You know your life sucks when you just quit like that but luke did the same thing in the books.

Day 7:Frank receives clean water from an unknown sponsor. Percy stabs Grover in the back with a trident. Jack the sword constructs a shack

Percy dies trying to escape the arena. Jack the sword strangles Frank after engaging in a fistfight.

Everything about the way Grover died is perfect 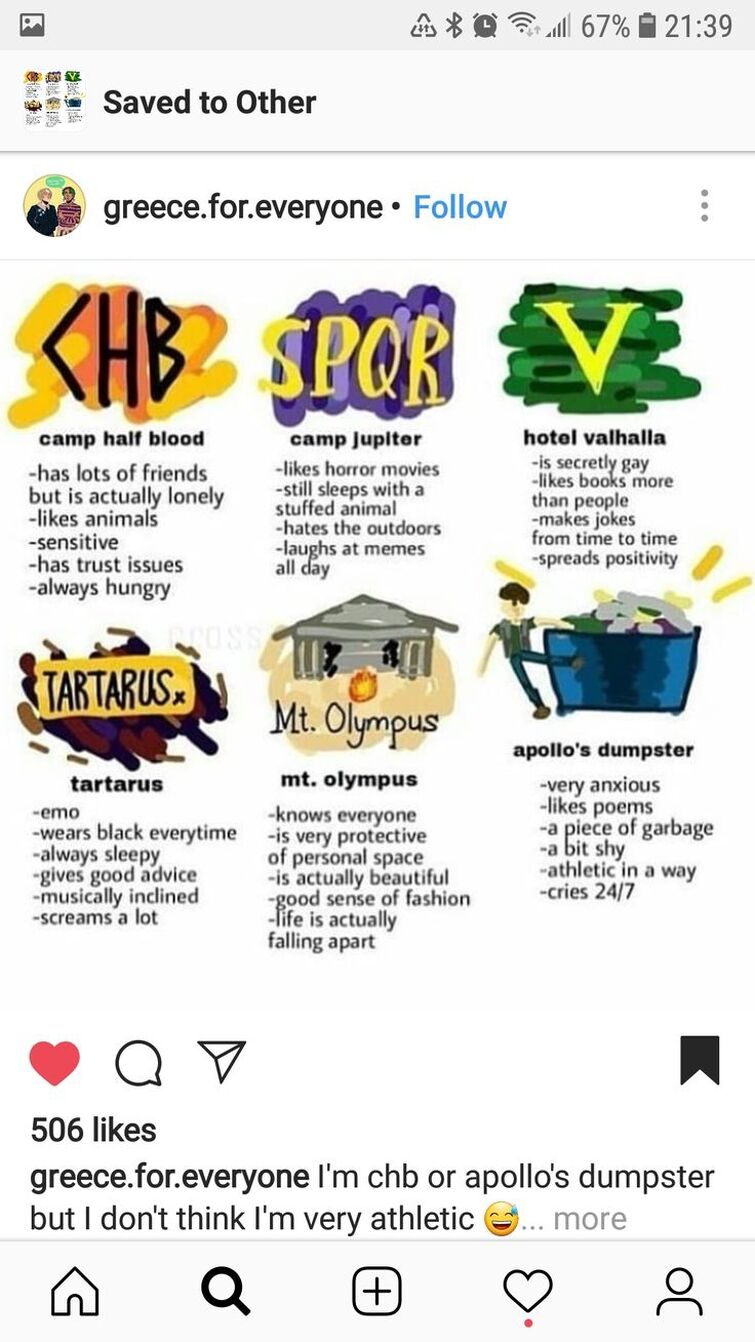 I'm not gonna say there are spoilers ahead or anything, since they're not massive stuff, but a few things;

Does anyone think that Reyna, when she and Meg were scorning Apollo about Koronis and the ravens, was accusing Apollo of being racist, since he turned them black from white with the curse he put upon them?

And does anyone think that the conversation he had with the Arrow of Dodona on Sutro Tower is how their conversations and tradings of knowledge should actually be like?

I just finished the Tyrants Tomb and listened to the first 4 Audiobooks of Trials of Apollo.

I kinda got bored really quickly. I think the Books are great, but i think it is too much Talking and narrating instead of action. Am I the only one who thinks like this, or do you think the same way?

I'm not gonna lie, I think The Trials of Apollo is the best-written saga by Rick Riordan.

Let's talk about the characters, they are outstanding! I love how Apollo grows from his punishment, he realises how important feelings are, he finally understand the value of friendship and human life. He got really courageous, he went trough a lot, hoping to become a god again, and when he finally return where he belongs, he realise that he doesn't really belongs there.

Then we have Meg, she is so strong...

All this characters have conquered my heart from the first word.

And what to say about the friendship, the romantic relationship and all the adventures!

In this saga you can see how much Rick Riordan has improved his writing; his humour was put in second place and the character development was put in first place.

Percy Jackson and the Olympians will always have a special place in my heart, but The Trials of Apollo has something more.

Can other deities 'claim' kids who aren't necessarily theirs? Like could Apollo claim Annabeth even if she isn't a kid of Apollo? And more importantly could a deity claim a regular mortal? I've had this question for a while now but no answers.

For a bunch of Riordanverse characters, I found there birthdays, and then Zodiac signs. At the bottom I will list the ones I tried, but couldn't find Information for. In the comments, you can put other characters that you want me to try and find. Here they are, and hope you like this!

Percy--Leo (stated in the books)

(if what I found was correct, Frank and Grover have the same birthday of June, 5)

ONES I TRIED AND COULDN'T FIND

(Reyna, Luke, Clarisse, Meg, Tyson, Rachel, and Zoe even though Zoe should just be her own the Huntress) 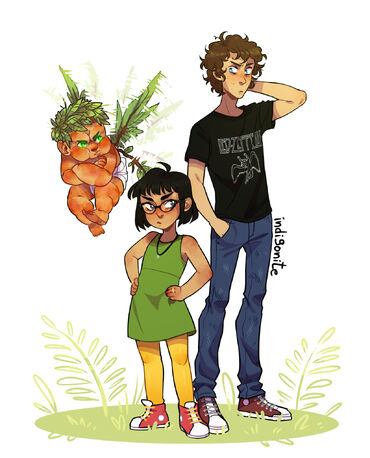 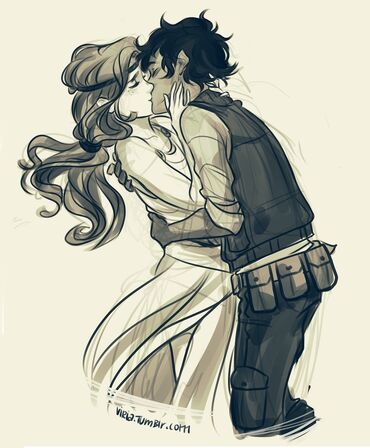 So I just kind of randomly thought about this.

Lester swore he's do lots of stuff when he was a god again.

So maybe you guys would know what other stuff he swore he'd do.

(Maybe y'all will find that he swore to come into this universe... idk)

Apollo also owes us a kpop makeup look too btw

(edited by Your Chill Dad)
Apollo
This post is locked.

Apollo: We can't beat Gaea! None of us are okay, child!

Gaea: I'm the Earth and what you walk on.

The Earth And The Sun: 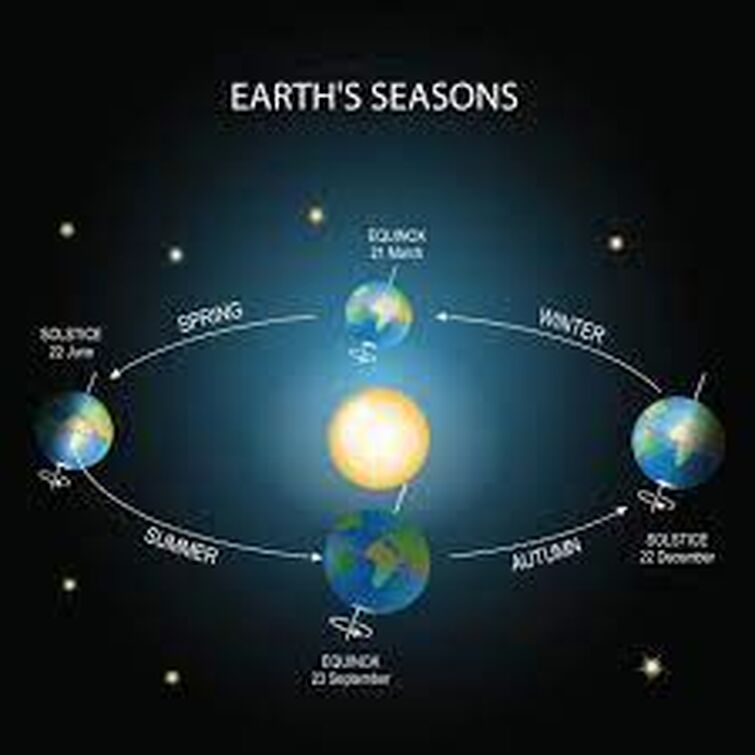 I couldn't pick my favorites so I went with all 8. Most of these Leo's says