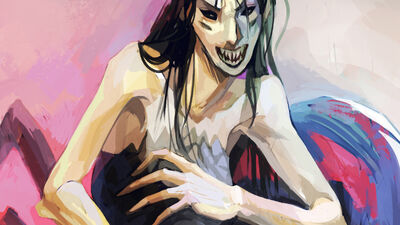 Arachne (came to mean "spider" in Greek) was once a mortal weaver of unparalleled skill who became arrogant, challenging the goddess Athena to a contest to see who was truly the best weaver. Though there were different variations of the story of the contest, there was one similarity shared by...

Ok so, everyone hates Athena for the Arachne and Medusa thing right? But here's the thing

In the original Medusa myth, Medusa was actually born a Gorgon, hence the 2 other Gorgon sisters. She was the child of Phorcys and Keto. But in the later versions, Ovid wrote Athena to look evil, so he wrote it that Medusa was a priest of Athena, and that Poseidon had you know what in Athena's temple with her (he r*ped her) and Athena punished Medusa despite it not being her fault.

Now, idk about you guys. But I consider mythology to be like ancient fantasy. So I like to listen to the oldest tellings. Like for example, if I rewrote PJO, you would probably consider Rick's version the OG, and the "correct" one.

And for this one, I'm not exactly sure. But I believe that Ovid also exaggerated the Arachne one too. I think Arachne was originally punished for her Hubris by Zeus, and was then brought back to life as a spider by Athena, though I may be wrong

Now, the way I see it, the oldest OG versions are correct, and all the younger versions are just sort of just fanfictions written by the other poets, if that makes sense. Anyways, I think Athena just deserves some justice, and people should know this.

Right, so this is a part two to a post I made before. I hope you find this amusing, because I do, for some reason.

Clarisse- "Jake" (I pointed out that Clarisse was a girl here) "No, Laura"

Zoe: "Isabella- wait, I called that other girl Isabella, this one is Mia"

If #DisneyAdoptPercyaJackson was real, I'd like to see how would it be like if Percy and Spiderman met eachother.

The most sarcastic part of this is Percy introducing

If you have seen the movie Caroline you know that the mom turns into a slender woman with a bigger waist. what if she is hiding 8 spider legs.