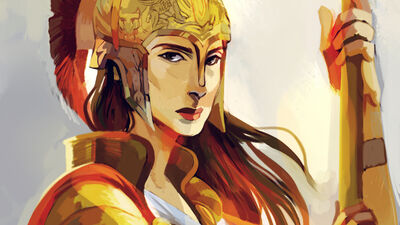 Athena, called Athene by her closest friends, is the Greek virgin goddess of wisdom, civilization, mathematics, strategy, defensive warfare, crafts, the arts, and skill. She is often portrayed as a companion of heroes and is the patron of heroic endeavor. Her Roman counterpart is Minerva. Athena... 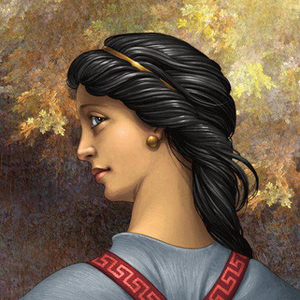 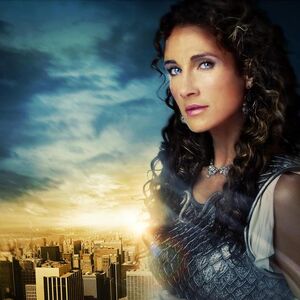 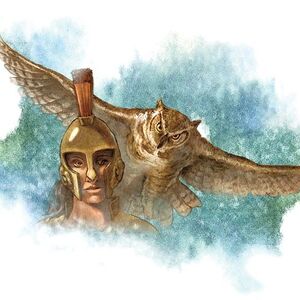 To be honest I think she would play flute I don't know why I just always assumed she was a flute player. You know but it's probably because her mom invented the flute.

That Percy is Annabeths uncle

Ummmm... If Percy is son of Poseidon and Annabeth is daughter of Athena Who is the daughter of Zeus. Which means Percy and Athena are cousins and to conclude it all together, Percy is Annabeths Maternal Uncle??????

If you know me, then you know I dislike Athena. Perhaps she is not the worst goddess morally, but for some reason, I have a dislike of her.

Now... there is no denying Athena has some intelligence. But I (personally) believe her intelligence is far less than most people believe. I personally think most of what she excels in is war strategizing. She's not that "wise" I think. What does "Wise" mean?

having or showing experience, knowledge, and good judgment. or responding sensibly or shrewdly to a particular situation. or having knowledge in a specified subject.

Now: I won't deny Athena has knowledge. She fulfills that part. But she is more of a person who knows things, than someone who is truly wise, who makes wise decisions. She is basically just a book: Full of knowledge, but she never uses this knowledge. Athena doesn't exactly always make wise decisions. She got Troy razed (along with Hera, yes) because she was mad at one man. And what she did to Arachne was.... And she's often acted out of bitterness and anger upon other women who didn't really deserve it. I would not say she makes good decisions.

And speaking of her treatment of women...

Athena, from what I've seen, is often seen as a symbol of Female Strength. Now... this is partially true. However, I would say her actual treatment of women is not very good, In fact. from what I've seen, she usually targets and punishes women, and helps out male heroes quite a lot. And then there's the fact that her own city, Athens, treated women like (redacted). Of course... maybe this is somewhat explained by the fact that, according to Greek mythology, women only exist to help the population grow and survive, and to bring woe and suffering to man, and for no other reason.

(Please don't get mad at me, I don't believe this at all, I'm just stating the facts in Greek Mythology from what I've seen.)

And of course, Athena is a goddess, not a woman. So, she probably sees women (human females) as utterly useless, but still, Artemis doesn't seem to be like this... and Sparta actually treated women decently well, from what I know. So why couldn't Athena pull a few strings, and make the conditions for women in Athens better? I think Athena was a sexist, in a sexist community. I honestly find Athena to be a bit hypocritical. And yes... there are good things about her, and she's not stupid by any means. I just (personally) think her wisdom is far, far overrated. I mean, she doesn't have many actual feats of being smart, unlike, say, Loki.

Though to be fair, judging from the stupidity of some of the other greek gods, then yes, I guess compared to them, Athena is pretty smart. I would say her intelligence, is, however, at least rivalled by Zeus, and Hermes as well. But I think some characters from other mythologies, such as Anansi, Thoth, Loki, and Odin, are far more intelligent than her

Thank you for reading

And incase you were wondering

I didn't mention the Medusa thing because it was just a biased telling made up by Ovid. In the original tellings, Medusa was born a gorgon, hence the 2 other Gorgon sisters. She was the daughter of Phorcys and Keto, and Athena had no connections to Medusa (other than helping Perseus slay her). But Ovid twisted the story to make Athena look bad, though to be fair, it does seem like something Athena would do. But still, I prefer to go by the oldest myths.

So in Mythology, Athena never falls in love. She's a sworn maiden. In Mythology, people only fall in love if Eros hits them with an arrow. And Athena (and Artemis) always dodge Eros's arrows, so they never fall in love. So how does Athena fall in love in the RV? I understand she doesn't do (you know), but still, she shouldn't be able to romantically love anyone in the first place... did Eros finally manage to hit her? Maybe he hit her with a weaker arrow, or a less detectable one, so Athena doesn't see them, hence, why her way of love is unique

Look out Artemis, Eros and Aphrodite are probably zoning in on you next-

So, I am confused on something. Please someone help me out.

So, we all know Hephaestus went up to Olympus, all angry, and trapped his mother in her throne, right? And both Ares and Hermes couldn’t get Hephaestus to release her, but Dionysus did it by getting Hephaestus drunk off of wine. Hephaestus then freed her and joined the council, correct?

So, later, when Zeus was having his big headache, Hephaestus split his skull open, and popped out Athena. And later on, Athena fought in the Gigantomachy, defeating Enceladus. But Dionysus was a demigod then, and him convincing Hephaestus to free Hera implies that he was around on the council before Hephaestus and had already created his wine, and Hephaestus was around before Athena…yet Dionysus was still a demigod during the Gigantomachy, an event Athena was in. I’m just so confused right now 🤚

And again, Ceto bare to Phorcys the fair-cheeked Graiae, sisters grey from their birth: and both deathless gods and men who walk on earth call them Graiae, Pemphredo well-clad, and saffron-robed Enyo, and the Gorgons who dwell beyond glorious Ocean in the frontier land towards Night where are the clear-voiced Hesperides, Sthenno, and Euryale, and Medusa who suffered a woeful fate: she was mortal, but the two were undying and grew not old. With her lay the Dark-haired One in a soft meadow amid spring flowers. And when Perseus cut off her head, there sprang forth great Chrysaor and the horse Pegasus who is so called because he was born near the springs (pegae) of Ocean; and that other, because he held a golden blade (aor) in his hands. Now Pegasus flew away and left the earth, the mother of flocks, and came to the deathless gods: and he dwells in the house of Zeus and brings to wise Zeus the thunder and lightning.

AHA!! WHAT ARE YOU GONNA DO ABOUT THAT OVID???? PROOF!! PROOF THAT ATHENA DID NOTHING WRONG!! THAT MEDUSA WAS NOT A PRIEST OF ATHENA!!! THAT YOU CHANGED THE STORY!!!! MWAHAHAHAHAHAHA!! JUSTICE IS MINE!!

I can understand why any mortal or half-blood would consider these two attractive, their mortal parents were attractive enough to get a god into both of their beds. Just telling Annabeth that she takes after her dad, and saying that her cousin takes after his mom is a compliment of the highest degree.

Soo my Frusin (check mah bio for more info on that word) and I were just talking and somehow we started talking about the birth of Athena. and we realized this is how it happened. this is EXACTLY how it happened :

Hephaestus : yoo thanks Apollo for making this amazing song!!

Apollo: *in the background* Watch him do it

*Hephaestus and Apollo run out of the room*

Athena: what the frick just happened

Wait does this count as a meme? if it does ... you can delete it i will post this in the official meme post .

Ok so, everyone hates Athena for the Arachne and Medusa thing right? But here's the thing

In the original Medusa myth, Medusa was actually born a Gorgon, hence the 2 other Gorgon sisters. She was the child of Phorcys and Keto. But in the later versions, Ovid wrote Athena to look evil, so he wrote it that Medusa was a priest of Athena, and that Poseidon had you know what in Athena's temple with her (he r*ped her) and Athena punished Medusa despite it not being her fault.

Now, idk about you guys. But I consider mythology to be like ancient fantasy. So I like to listen to the oldest tellings. Like for example, if I rewrote PJO, you would probably consider Rick's version the OG, and the "correct" one.

And for this one, I'm not exactly sure. But I believe that Ovid also exaggerated the Arachne one too. I think Arachne was originally punished for her Hubris by Zeus, and was then brought back to life as a spider by Athena, though I may be wrong

Now, the way I see it, the oldest OG versions are correct, and all the younger versions are just sort of just fanfictions written by the other poets, if that makes sense. Anyways, I think Athena just deserves some justice, and people should know this.

Hi everyone! So I don’t have a ton of unpopular opinions, but I wanted to share the few I do have.

Welp! That’s all! Have a good day/night!