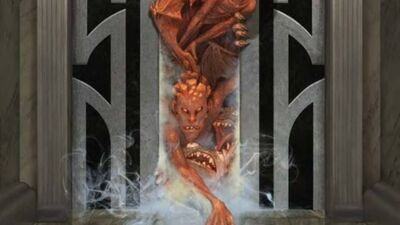 This article is about the temple. For other uses, see The House of Hades (disambiguation). The House of Hades, also known as the Necromanteion, is an underground temple in Epirus, Greece, dedicated to the god Hades and his wife Persephone. The mortal side of the Doors of Death was located here...

One of the many things I will never forgive Rick for is outing Nico, and surprisingly hardly anyone else, from what I've seen, finds this to be problematic. Here's everything wrong with Cupid outing Nico and why it didn't need to happen.

What does outing a character achieve? Absolutely nothing. There are much better ways to introduce a character as LGBTQ, outing said character is not one of them. It does nothing but potentially scaring a closeted queer reader. Cupid outing Nico didn't do anything for his character except add more trauma, which he already has enough of.

It was never talked about again

Rick literally just severely traumatized a character and then proceed to hardly mention the event again. I could maybe see the justification of the scene if Rick had shown us the effects of the outing on Nico, but his character vanishes and we hardly see him again until he’s needed for another task. As someone who knew people who were outed, I find this to be a huge problem. Outing someone can be DEADLY (this article does include triggering subjects, but I am including this source because I do believe that this is an issue and should be read and/or shared if you are able to do so). I’ve seen the effects myself and it’s nothing to take lightly. The way Rick handled this scene was a huge disservice to the LGBTQ+ community (closeted as well).

I would also like to point out that Nico was outed twice, the second time being in Blood of Olympus with Reyna and Coach Hedge.

“According to Reyna, the air around him dropped to freezing. The ground blackened. In one horrible cry, he unleashed a flood of pain and anger on everyone in the clearing. Reyna and the coach experienced his journey through Tartarus, his capture by the giants, his days wasting away inside that bronze jar. They felt Nico’s anguish from his days on the Argo II and his encounter with Cupid in the ruins of Salona.”

But again, this scene was never mentioned again and forgotten.

“It was a big moment when Nico finally revealed his feelings for Percy in front of Jason and Cupid. While Nico’s bravery was admirable, the truth that he had a crush on someone as tragically straight as Percy was utterly heartbreaking. Thankfully, all of Nico’s friends were loving and supportive. Annabeth never even gave him a side-eye. As far as we know.”

That’s a weird way to say “violently outed”. I love how they hint at Annabeth being homophobic (Annabeth slander at it’s finest) and that Percy is “tragically straight”, that made me laugh. Anyway, this article, like the rest of them on this god-awful site, is trash. However, this section in particular rubbed me the wrong way. It wasn't bravery that forced him to out himself, it was fear, force, and pain of him being outed. Also, Nico never “came out” in this scene. The only time he came out in the series was at the end of Blood of Olympus:

“‘So,’ Nico said, ‘since we’re going to be spending at least a year seeing each other at camp, I think I should clear the air.’

Percy’s smile wavered. ‘What do you mean?’

‘For a long time,’ Nico said, ‘I had a crush on you. I just wanted you to know.’ Percy looked at Nico. Then at Annabeth, as if to check that he’d heard correctly. Then back at Nico. ‘You –’ ‘Yeah,’ Nico said. ‘You’re a great person. But I’m over that. I’m happy for you guys.’

‘See you around, Percy,’ Nico said. ‘Annabeth.’ She raised her hand for a high five. Nico obliged. Then he walked back across the green, to where Will Solace was waiting.”

This is the only scene where Nico comes out, but when most people say that Nico came out, they are referring to the Cupid scene in House of Hades. This is problematic, there is a clear difference between coming out and being outed and people should know it, this article is clearly blurring the line here.

Why did Rick choose to make this scene a Jason POV? The scene had nothing to do with Jason, and there is also the fact that Jason played no significance in this scene whatsoever. Making the scene from his perspective makes the scene centered around him, it makes him the main focus. The main focus in this scene should be Nico since he is the one being brutally outed (which really, never should have happened in the first place).

This post is pretty heavy, but this is a serious subject that needed to be called out for what it is: problematic.

Ok I don't understand why everyone thinks Bob's death is sad. Whenever I think of Bob's death, I think of Nico and how awesome he is because he was the only one who ever spoke to Bob, and if he didn't then Bob would have probably killed Percy and Annabeth, not sacrificed himself for them. Ok, back to the point, Bob is an awesome character, y'know? But his death was not that sad for me, because he just came in that book, and he's not in a lot of chapters. Ok now your probably thinking "OMG BUT THEN YOU DON'T CARE ABOUT ZOE AND BIANCA!" Well I actually do care about them, for reasons I'm too lazy to write down lol. But yes, Bob can be dead and I won't care that much. ALSO WHAT HAPPENED TO YOU GUYS CARING ABOUT THE GIANT (I forgot his name) WHO ALSO SACRIFICED HIMSELF WITH BOB?????? Ok also please no fighting in the comments if you guys find Bob's death sad then that's ok I won't dislike you.

Alright so imagine this, Your in Venice, Italy and your on vacation because of Summer Break and your walking and you see 100 of Dogs (Katoplebs or whatever) and then you see a Buff Asian Guy, Just jump off a roof and then a eagle pops out of no where and that Asian guy just disappears and then you see a eagle Killing these poor little dogs then the Asian guy reappears and disappears then a Bear just pops up and just slashing at these dogs and then you see a Lion and the bear disappears. I don’t know what about you but i’m never going back to Venice ever again but that’s me. But if you were a mortal who couldn’t see through the mist what would your reaction be to Frank’s absolute carnage?

I'm re-reading The House of Hades and laugh every time they say Nico loves Annabeth. I mean, on the Argo II there were the smartest Athena's daughter, an Aphrodite's daughter, Nico's step-sister and PERCY and nobody noticed it- Nico, please, join my theatre club.

"It isn't until The House of Hades that Percy actually figures out how to write with Riptide as a pen." -Riptide's Wiki page.

I don't have time to explain them in full, but here are my opinions

If, in House of Hades, Percy Jackson aka the most optimistic person on the Argo 2 at times, gave up in the Cocytus River and started thinking life was meaningless, does that mean he was suicidal?

...when Annabeth brought up Rachel's name and Percy got all flustered and schist?

Percy suggest to Reyna in SoN that she partners up with Hazel or Frank as praetors, however she debunks that idea by saying that the Legion would never follow Hazel because she is a child of Pluto or Frank if they found out his family history.

However, during HoH Reyna approves Frank's role as praetor and agrees he is right for the job. Then later, in ToA, TT Reyna resigns her role praetor to join the Hunters of Artemis, and the entire senate unanimously agrees to put Hazel in her place.

What I am getting at here is this: The two people who Reyna said the Legion wouldn't follow are the Praetors of Camp Jupiter.

So I was reading Percy Jackson and the Olympians book 2- The sea of monsters... and this happened 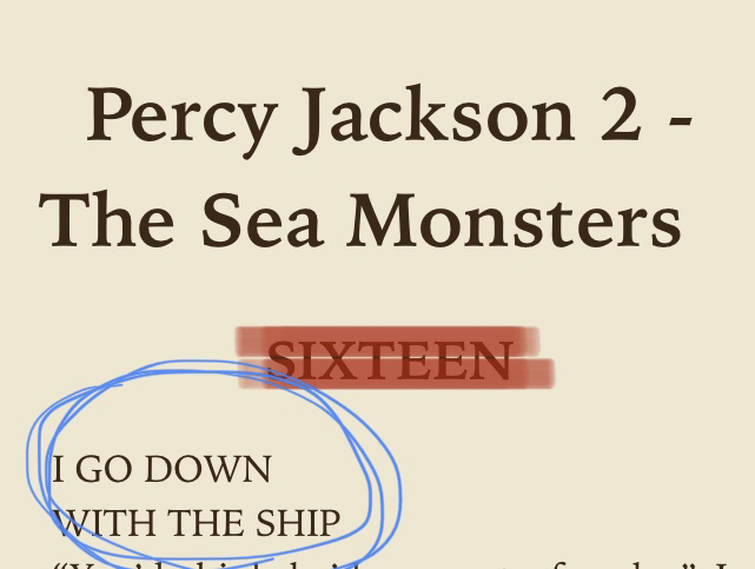 where you least expect me, cupid answered. as love always is.

* as i am rereading the percy jackson franchise, i've been highlighting my favorite (meaningful) quotes and decided to share them with you all :) i know someone has done this before me and has since retired from their spot, but if you all wouldn't mind, i'd love to continue their little legacy. if anyone could provide their user, that would be much appreciated! i joined just as they stopped doing it, so i apologize for any repeated quotes. thank you!

I love how nico just pops up out of nowhere with a plan to save the day. Like he just appears with his abundance of knowledge on how to solve everyone's problems. "You should swim in the river styx percy" "I know where the house of hades is ." "I can shadow travel the statue and prevent war." HOW THE HELL DO YOU KNOW ALL THE ANSWERS!!!

How did Bob and Damasen die in HoH?

Like aren’t they immortal and stuff? Tartarus is like the breeding place of immortals, so cant they just regenerate? And after they regenerate, they can like just pop back into the western civilisation and hunt demigods?

"Stupid rock gods!" Leo yelled from the helm. "That's the third time I've had to replace that mast! You think they grow on trees?"

Nico frowned. "Masts are from trees."

I’ve heard a lot of people say Percy’s fatal flaw (loyalty) has never gotten him into trouble. No offense, but how in the world is that true. I can think of several occasions where caring about his loved ones got him in trouble.

Hmm... it looks like Percy’s really into protecting people

P.S. These are just off the top of my head that’s why I might’ve missed stuff or said really vague things... it was really what I remembered really quickly... didn’t have specifics

P.P.S. If I missed an instance please tell me

P.P.S.S. I could see how you can make the argument that maybe he doesn’t get directly harmed by his fatal flaw... but honestly that’s just because he’s a strong fighter not because he has a weak flaw. It honestly gets him in more trouble than some of the other people’s flaws

(edited by administrators)
Percy Jackson and the OlympiansHouse of HadesToxikinesis