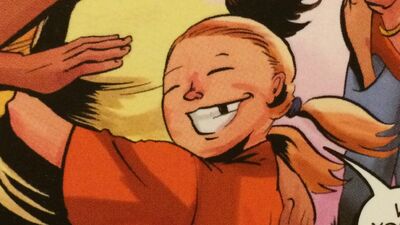 Lacy is a Greek demigod daughter of Aphrodite, the goddess of love. She goes to Brooklyn Academy for the Gifted when not at Camp Half-Blood. 1 The Heroes of Olympus 1.1 The Lost Hero 2 The Kane Chronicles 2.1 The Serpent's Shadow 3 Personality 4 Appearance 5 Abilities 6 Etymology 7 Trivia 8...

I personally LOVE Piper. Granted, I didn't like the fact that she broke up with Jason. Or that she was dating someone new only two months after Jason's death. (Yeah, yeah. I know. She and Jason had broken up but still) She's one of the most powerful demigods ever. She woke up a metal dragon with JUST HER VOICE. She defeated a goddess with JUST HER VOICE. She lulled Gaea, a primidorial deity (sorry I don't know how to spell that.) with JUST HER VOICE. Yes, she's made a few mistakes (stealing the BMW, stealing in general, making people do what she's wanted them to do, etc) but she's always felt remorse for those crimes. Who cried with Hazel when Percy and Annabeth were in Tartarus? Piper. Who was crying tears of joy when Percy and Annabeth came back from Tartarus? Piper. Who stood up for people who couldn't stand up for themselves? Piper. Who has been a good, kind, and loyal friend? Piper McLean. Justice for Piper! She's amazing and doesn't deserve all the hate.

"I called over one of my mortal friends, a lovely girl named Lacy. She was a year younger than I, so she looked up to me greatly. (I know, it’s hard not to.) She had cute blond pigtails, a mouthful of braces, and was possibly the only person at the dance more nervous than my brother. She’d seen pictures of Carter before, however, and seemed to find him hot. I didn’t hold that against her. In most ways, she had excellent taste. “Lacy—Carter,” I introduced them. “You look like your pictures!” Lacy grinned. The bands of her braces were alternating pink and white to match her dress. Carter said, “Uh—” “He doesn’t know how to dance,” I told Lacy. “I’d be ever so grateful if you’d teach him.” “Sure!” she squealed. She grabbed my brother’s hand and swept him away. I started to feel better. Perhaps I could have fun tonight, after all. Then I turned and found myself face-to-face with one of my not-so-favorite mortals—Drew Tanaka, head of the popular girl clique, with her supermodel goon squad in tow. “Sadie!” Drew threw her arm around me. Her perfume was a mixture of roses and tear gas. “So glad you’re here, sweetie. If I’d known you were coming, you could’ve ridden in the limo with us!”

The answer is; NICO FOR THE WIN (Unless for two very, very, very tiny loopholes).

Against Piper, the only reason she would live would be because ma dude is a very nice person. He'll just force her down to the ground in five minutes and be all, ‘Good game; get up.’ with a hand to help her up. #angelo.

Because the thing about charmspeak:

Against Drew; the girl is dead. Gone. Yeeted.

What if the girl is the most powerful charmspeaker; see above.st

Silena; Nico would just say “Begone, heroine.’ and she's back to the underworld.

Against Lacy; nuh uh. Two minutes and she's down.

The only people that stand the slightest chance are The Hottest Dude of Aphrodite Cabin and...

If they could train Hottest Dude to charmspeak; it's mostly all over for Nico. If it's Cupid; Nico wouldn't even go there.

Does anybody else remember Lacy appearing in KC. So basically a greek knows about eygptians. How is that possible. What path does she follow, and how does she keep it a secret?

What do you think would happen if Sadie ever discovered that Drew and Lacy were not only demigods, but also half sisters?

Has anyone else noticed that Lacy is the only character in all of Rick's books that has braces? Does everyone else have perfect teeth or something?

Note: the only exceptions are Piper, Lacey and Silena (Fallen ones/Rest in peace)

P.S: Hands up to join the Don't Like Pipes club.

In Serpent's Shadow, it's revealed that Sadie and the trainees go to the same school (Brooklyn Academy of the Gifted, or BAG for short) as Drew Tanaka and Lacy, who are both Aphrodite campers at CHB. After the events of Demigods and Magicians, the Egyptians now know that the Greek Pantheon still exists and vice versa. Do you think that Sadie discovered that Drew and Lacy were demigods some way or another after this?

In the serpent's shadow at the BAG school dance, lacy and drew were there. they had been to some camp together(chb?). does that count as a crossover?