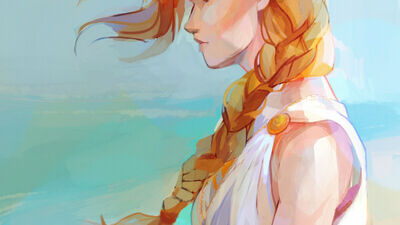 Ogygia is the island that Calypso lived on, formerly used as her location of exile by the Olympians before being rescued by Leo Valdez.  Ogygia (pronounced /ɔː.ɡy.ɡí.a/) is a phantom island that exists everywhere and nowhere. It was designed as the prison for the nymph Calypso, daughter of the...

The Reason i think this is because lots of unknown things happen they got his body right? but there is lots of ways to fake your pulse And they might've gotten the wrong Body and Jason maybe Went To Oyegia But Calypso Isn't there So Jason Might Be Stuck There But This is a theory . . .

I read somewhere that in BOTL that Calypso cursed Annabeth. Pls elaborate for me

It would have been soo much more meaningful if she had to make a choice like Percy did rather than Leo's whole seventh wheel thing. If she made the same decision that Percy had, Calypso being her biggest what if. Piper telling the gods they need to keep their promises, even though she chose Jason in the end. (We are pretending that toa does not exist)

I'd love to hear your thoughts on this!

Yet, in Ogygia, he was all, [cue sing-song voice] Calypso this, Calypso that.

These are my completely unbiased (I tried to look at things from everyone's point of view) takes on the matters, so hear me out:

1. The Heroes of Olympus series. Ok, so I know a lot of people think HoO wasn't that great and I mostly agree. But it wasn't bad either. Sure, it was no PJO and there were very few deaths, but that doesn't necessarily make it bad. None of the other series can ever compare to PJO. So if that's the way you're all thinking, that HoO wasn't as good as PJO, then I'm sorry. PJO was the series that made us fall in love with the Camp Half-Blood Chronicles, the series where Percy discovers his true identity, goes to CHB for the first time and meets Annabeth and the other campers. The series which introduced Percy and us mortals to the mythology verse. See what I mean? HoO can't par with PJO. They can't exactly be compared. So please. Treat it separately, and you'll see HoO has many great things too. Percabeth has already happened, so we get to see a new sort of interaction between Percy and Annabeth. Many new and amazhang characters were introduced. Personally, out of the other series, I think HoO is closest to being as good as PJO.

2. Annabeth. Annabeth's character is not badly written. Most of the hate towards her is because of how she behaved with Rachel and I think her actions were more or less justified. She liked Percy since she was twelve and had been hinting on her feelings for quite some time, but Percy never noticed. Then she suddenly finds out he told some mortal girl who has clear vision about the existence of the gods. He had a good reason for doing so, but do you really think that mattered to Annabeth? Sure, she could have acted more rationally by not being so rude to Rachel but she was frustrated. Frustrated and jealous. Chiron himself says that she is possessive and territorial. It's what she is. So cut her some slack. Nobody is perfect. I mean nobody, not Nobody. Besides, the characters are supposed to be realistic. So it's only normal that they'll have some flaws. She is also one of the most powerful demigods, Percy himself said so, regardless of the fact that she doesn't have any powers except her mental and physical prowess.

3. Piper. I'll admit that Piper isn't one of the best characters but, like I said, they're supposed to be realistic. So somebody has to be less than ok. It's true that she is sorta whiny and has no good reason to dislike girly girls but she is most definitely not a sociopath/psychopath. When she said Percy looked unimpressive compared to Jason, she was most probably just trying to defend him from herself because she knew, in reality, Percy was better. But what I really did not like was how she said his hair was longer and darker when she was sizing him up. Like, what the Hades is wrong with that?? And Percy being an inch shorter than Jason is not a big deal. He's still very tall. So, you know, she does come off as whiny and all but not a lunatic. And the reason for her low self-esteem is pretty understandable. We're not always that confident when it comes to ourselves. Besides which, she was a daughter of Aphrodite. Most of them just wanted to sit still, look pretty. She felt like she wasn't enough compared to other demigods as most Aphrodite kids are only concerned with looks, which she did not like and wanted to prove that she was not like the rest.

4. Percabeth. Percabeth is sooooo not toxic (IMO). Annabeth punching and kicking Percy a few times when she was under the spell of the Sirens' song does not make her abusive. And the judo flip. She was overwhelmed. A judo flip in the demigod world is like a punch in the mortal world. That's all I gotta say. Because, frankly, I don't think any other justification is quite needed, since, by their standards, a judo flip is pretty normal.

5. Caleo. Caleo is probably the closest ship to being toxic. Isn't Calypso cursed to fall in love with every hero who washes up on Ogygia's shore? Maybe Leo was not as handsome as the other heroes, such as Percy, but her curse doesn't mention anything about looks. The only possible reason I see for her to yell at Leo was him demolishing her table. Plus, they did not have much development. But, I gotta admit, once they got over their issues, they did make a cute couple. I'll give them that.

*These are but my opinions (as unbiased as I could make them) and a lot of you guys will probably have opinions varying from mine but I'll respect them. Just please keep the comments toxic-free and respect each other's opinions.

In Blood of Olympus, how could Leo go back to Ogygia to get Calypso? I thought that people could only go there once.

I’ve heard a lot of people say that caleo is the worst relationship. And since I will defend Caleo till the day I die (I will also defend Bianca’s choices till the day I die). I thought I would make a post defending it.

A complaint people constantly tell me is that they argue too much. First of all, Halfborn and Mallory argue a lot, and I don’t THINK people have a problem with them (do people not like Halfborn and Mallory... I mean I haven’t heard anyone hate on them). They reason they fight a lot is to show that Leo is different from the other people she has “fallen in love with.” He isn’t like the others cause he actually loves here. See with other relationships Calypso has been in, they thought they loved each other cause of the magic of the island. They had no conflict, no fights. The island represented paradise. With everything being perfect. But in the real world, a world which is very different than Oggygia (I’m pretty sure I spelled that wrong), their relationship wouldn’t last. If we look at Percy and Calypso’s relationship, we see that what I say still stands. Calypso liked Percy because of the curse of the island. Percy liked Calypso because of the safety of the island. There was no problems between, and for, the two of them. This sort of, as I said before, paradise would appeal to Percy after the long quest he was in the middle of. But in the end he left, not because he was noble and wanted to put his duties first, but because he loved Annabeth, not Calypso. After the magic of the island was gone Percy and Calypso wouldn’t like each other.

But Leo was a different story. The moment he came, the curse was broken (as shown by the raft not working), and conflict was there (he and Calypso didn’t instantly get along). And even when he left, he was able to find her again. This is because he truly loved her.

P.S. I respect your opinion, I just disagree. Sorry if this came off as disrespectful