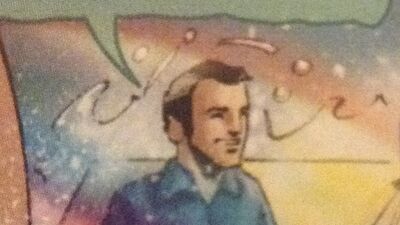 Paul Blofis is thestep-father of Percy Jackson and an English teacher at Goode High School. He is currently married to Sally Jackson, with whom he had a daughter, Estelle Blofis. 1 History 2 Percy Jackson and the Olympians 2.1 The Titan's Curse 2.2 The Battle of the Labyrinth 2.3 The Last...

Remember how moms are always mad when u get a tattoo? Now imagine how Sally felt after the war when she saw Percy's. She must've been furious. This is how I think it played out:

Sally: Percy! *cries* It's been months! And ANOTHER WAR? Imma go chew out your father soon, but you're here! Paul, Percy's HOME!

Paul: Percy! We have some exciting news to tell you, but first settle down son.

Percy: *wakes up* (Why does everyone like my name? First queen porta potty now this...!) Yeah, Mom?

Percy: What are you talking-

Sally: You gonna tell me about it?

Sally: Got this chancla(slipper) for $2 dollars! WHST"S WITH THE TATTOO?????

Sally: What was that?

Tell me how you think sally would react, or how this scnario would play out in the comments!

Why does Natalie Chase have art but not Paul? Or Randolph? Or Frederick? Almost all the adults that were really contributing to the story do not have official OR Viria art!

If Celestial Bronze can't touch humans, why could Paul pick up the sword during the Battle of Manhatten?

My brain just threw this at me.

Tell me what you think.

I saw a post called fixing Paul Blofis by @Amela13 and this got me thinking. I believe and I always have that Paul Blofis is, in fact, Poseidon. This was my reply to her post and I was asked to elaborate so here we are.

(When Percy agreed so easily to Paul marrying Sally) I think Rick was leaving his options open. It does happen, sometimes, that an author has an idea and they are toying with it and this was meant to be a hint but since the story line did not come back around in future novels, the idea is dropped and it seems out of character. Here is what can easily explain this moment.

Percy may have realised that Paul Blofis is Poseidon, which would explain why he was so quick to agree. He knew he and his mom and sister would be treated fairly well. There are many clues that point to it.

First, Percy walks in and sees Paul wearing Neptune's lucky fishing hat. Isn't that an odd thing for a guy to do? Wear another man's hat, your girlfriend ex's hat? A god no less. Some might argue that it is Neptune's not Poseidon's but Poseidon and Neptune are the same god just different aspects.Does this prove anything? No but it does set off an alarm.

Next, Paul accepts very easily the existance of greek gods and Monsters and the fact that Percy is a demigod and he covers for him at school. This brings about another issue. Paul cannot be Poseidon because he is a teacher and Poseidon has better things to do. Well, perhaps it is a sacrifice he is willing to make for love. It has been proven that the gods can be in many places at one time so why not?

Next, Percy agrees quickly to the future nuptuals. Considering the prior relationship Sally had been through, Percy should be asking a million questions, warning and threatning Paul with all he his, when the question arises but he is like "Sure! Great".

I believe he doesn't need to do this because he knows that Poseidon and Sally have loved each other for always and that he would treat her "as the Queen she is." Poseidon's words there. So that was a no brainer for Percy. Is this proof again? No but dind ding ding...

This one is where I first realised Paul and Poseidon may very well be the same person. During the Battle of Manhattan, Paul joins the fight. He is not put asleep nor is Sally. Only a god could protect them from falling asleep like the rest of Manhattan. Why would Paul and Sally be saved from this fate? Because Paul is Poseidon and he protected Sally and this also explains the clear sight. Paul wanted to help Percy but since he was so busy at his Palace in the sea, he chose to protect the Jackson family and help them survive and possibly win the Battle of Manhattan.

Poseidon was there all along but in a weaker form which was Paul. Does this prove Poseidon is Paul? The alarm should be ringing very, very loudly now.

On their own, these items just point to the possibility that Paul is indeed Poseidon but with all these things put together, doesn't this make a good case that Poseidon is Paul Blofis?

Let me know what you think and if there is more evidence, feel free to share.

Here is the inspiring post by Amela13, if you want to check it out

Fixing Paul Blofis as a Character | FandomI was thinking about how to improve Paul Blofis…riordan.fandom.com

I was thinking about how to improve Paul Blofis as a character. I didn't strongly dislike him, but one scene i DID NOT like was at the end of BoTL, where he literally asks Percy for his blessing to marry his mom AT HIS BIRTHDAY, and Percy immediately agrees. This seems super out of character for Percy, after everything he's gone through with Gabe, it seems strange and ooc that he immediately likes Paul. I think it whould've gave Percy more character if Paul had asked him while driving him to school orentation in the very beginning. Percy doesn't want to agree, but he saids he "needs time to think about it". and will get back to Paul later.

Obviously he doesn't have a chance to for a long time, but after the events of the fight at chbs, he goes home. He sees how happy Paul makes Sally and makes her laugh. He thinks about how the war is quickly approaching, and that he might not be home for a long, long time. That he might even die. And he thinks about how Paul could help his mother through that. Percy goes to Paul and tells him that he's got that blessing. First Paul is confused, but then he smiles, and gives Percy a werid side-hug. It's arkward, but it's a cute step-father/son bonding moment. Paul tells him he's had that ring in his pocket for a long, long time now, waiting for that premission from Percy. It shows how Paul actually cares about Percy's emotions and opinon matters to him, which never did to Gabe, or even Posideon to a point. The next day, Paul proposes, and Sally saids yes. A day or two later, we get that birthday scene (OT, but that's probably my favorite scene in the whole series, with Tyson, Nico, Poseidon, Paul, and Sally all coming together to celebrate Percy's birthday, and it really resonated with me.) It gives Percy some actual time to think over this choice, and gives him more of a character arc. He learns he can't always do everything to protect his loved ones all alone.

I’d like Paul to make a physical appearance in one of the last two books. He hasn’t made an appearance since The Last Olympian almost ten years ago. I’d like him to appear at least in a vision or something.