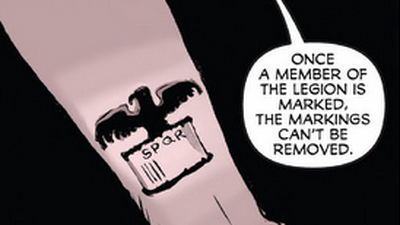 SPQR is an initialism from a Latin phrase, Senātus Populusque Rōmānus, which was the motto of the Roman Empire and translates to "The Senate and the People of Rome". It links together the original struggles between the senators, the people of Rome and the early Roman Empire. Senātus means "the...

Remember how moms are always mad when u get a tattoo? Now imagine how Sally felt after the war when she saw Percy's. She must've been furious. This is how I think it played out:

Sally: Percy! *cries* It's been months! And ANOTHER WAR? Imma go chew out your father soon, but you're here! Paul, Percy's HOME!

Paul: Percy! We have some exciting news to tell you, but first settle down son.

Percy: *wakes up* (Why does everyone like my name? First queen porta potty now this...!) Yeah, Mom?

Percy: What are you talking-

Sally: You gonna tell me about it?

Sally: Got this chancla(slipper) for $2 dollars! WHST"S WITH THE TATTOO?????

Sally: What was that?

Tell me how you think sally would react, or how this scnario would play out in the comments!

Jason Grace Halloween costume. The tattoo was the best part. 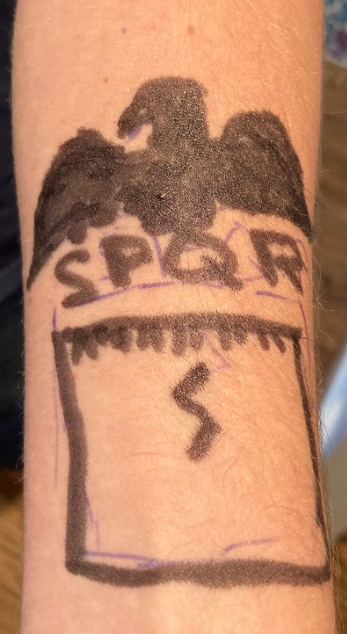 Spoilers from Heroes of Olympus!

We don't often get Antagonist couples so... what if Octavian had an innocent girlfriend (this way there'd be no Reyna/Octavian or Rachel/Octavian) who didn't realize he was evil and helps him in his rise to power.

Her name is Felicity and she's a daughter of Fortuna from the second cohort. She's one of the only daughter of Fortuna at Camp Jupiter and arrived there when she was fifteen. She has Tychokinesis, which gives her the power to (moderatly) control good and bad luck. Felicity and Octavian met at her first Feast of Fortuna (June 24th, also known as Summer Solstice) Octavian suggests at the feast that they're first daughter of Fortuna should make a toast to her mother's feast, after he brands her with the SPRQ tatoo. Ever since that day they have been friends, it was not until the start of her second year that they became a couple.

She might be the sweetest and most innocent girl you've ever met, also the most oblivious, she admires and loves Octavian for his power, way with words and his devotion to her. Octavian has such a liking to Felicity because he wants to be on the better side of chance, he subtly hints to her that she should use her powers of fortune on him, and to give mischance to his enemies. Ever wonder where Octavian gets his pillow pets to sacrefice? Well each week, a new stuffed animal appears holding a clover and a note saying 'Good luck'. Felicity always accompanies him during his sarcrefices for Prophecies and helps him with his search for the Sibylline books, he calls her his 'lucky charm'. Those at Camp Jupiter who disliked Octavian also hated Felicity since she's Octavian's girlfriend, thoughmany campers felt forced to respect Octavian if the daughter of luck was by his side. When Percy Jackson comes along Octavian influences his digust towards Percy onto Felicity, who does her best to give misfortune to Percy Jackson, though it does not work because he has a balance of both good and bad luck already. Felicity always respected Hazel Levesque as a camper so she insured her own secrets were not shared by Octavian. Since she respected Hazel, she also gave some fortune to her half-brother, Nico and Felicity did her best to balance his terrible fate.

Though once Gwendolyn is mysteriously killed in the Roman War Games, Felicity starts to doubt Octavian's good intentions. Slowly, Felicity sees her boyfriend's thrist for power and sticks to him more carefully, watching him. She leads his destiny away from the Siblylline books and the gift of Prophecy as much as possible. Octavian suspects nothing of his girlfriend, who only remains in the relationship to bring his downfall. Felicity leads him away from any other sources of prophecy like Ella, the Harpy and Rachel, the oracle in fear that Octavian will use them as he did with her.

Finally, after Octavian declares himself Pontifex Maximus despite Reyna's orders, Felicity tells him she no longer wants to be in a relationship with 'a wannabe Julius Caesar'. She fights along the Romans who are allied with the Greeks (much to their confusion) which only makes Octavian more willing to lead the defeat the Greeks. Octavian tries to shoot an Onager at Gaea though he's also launched at Gaea in the proces which kills him, this answers Felicity's prayer to her mother when she asked for Octavian to get what he deserved but at least die a hero.

At Octavian's funeral, he is deemed a hero but Felicity only sheds one tear and speaks two words "Good riddance," earning many laughs and confused looks, for the campers never knew Felicity wasn't so oblivious to her boyfriend wish for power much less that she broke up with him not long ago. Then, Felicity makes a speech at the feast of Fortuna explaining her realization to Octavian's wrong-doing and how she tried to do everything she could to stop him once he found out, then praised all of the Roman and Greek demigods for their effort in the war and much luck to both camps from Fortuna.

THANK YOU for reaidng all of this, I spent quite some time thinking of it but I felt it added more to Octavian's character and how he'd have another reason to rise to power, for his lucky charm. I hope you enjoyed! 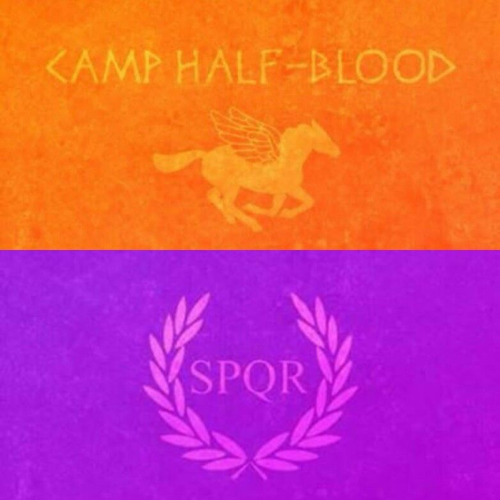 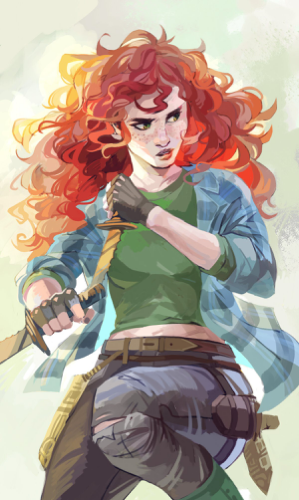 I FOUND MISTAKE JASON HAS SEVEN BARS BUT IN NORMAL BOOKS IT SAYS HE HAS 4!!!! Comment if u found other mistakes