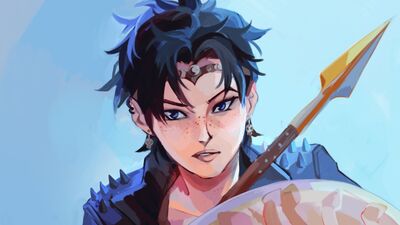 Not to be confused with Thalia, Muse of comedy. Thalia Grace is a Greek demigod, the daughter of Zeus and the mortal Beryl Grace, and the older sister of deceased Roman demigod Jason Grace. She was transformed into a pine tree on Half-Blood Hill, which still stands as the official border for... 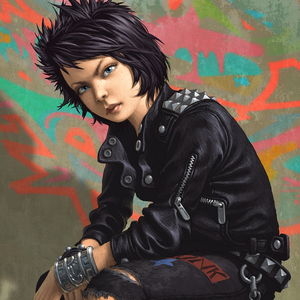 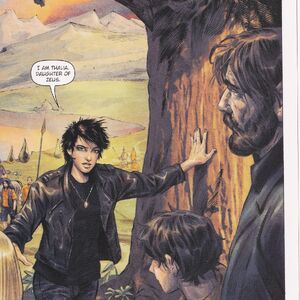 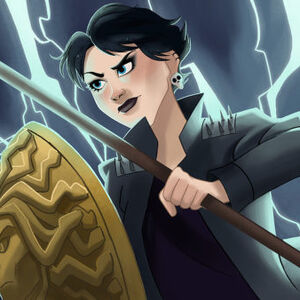 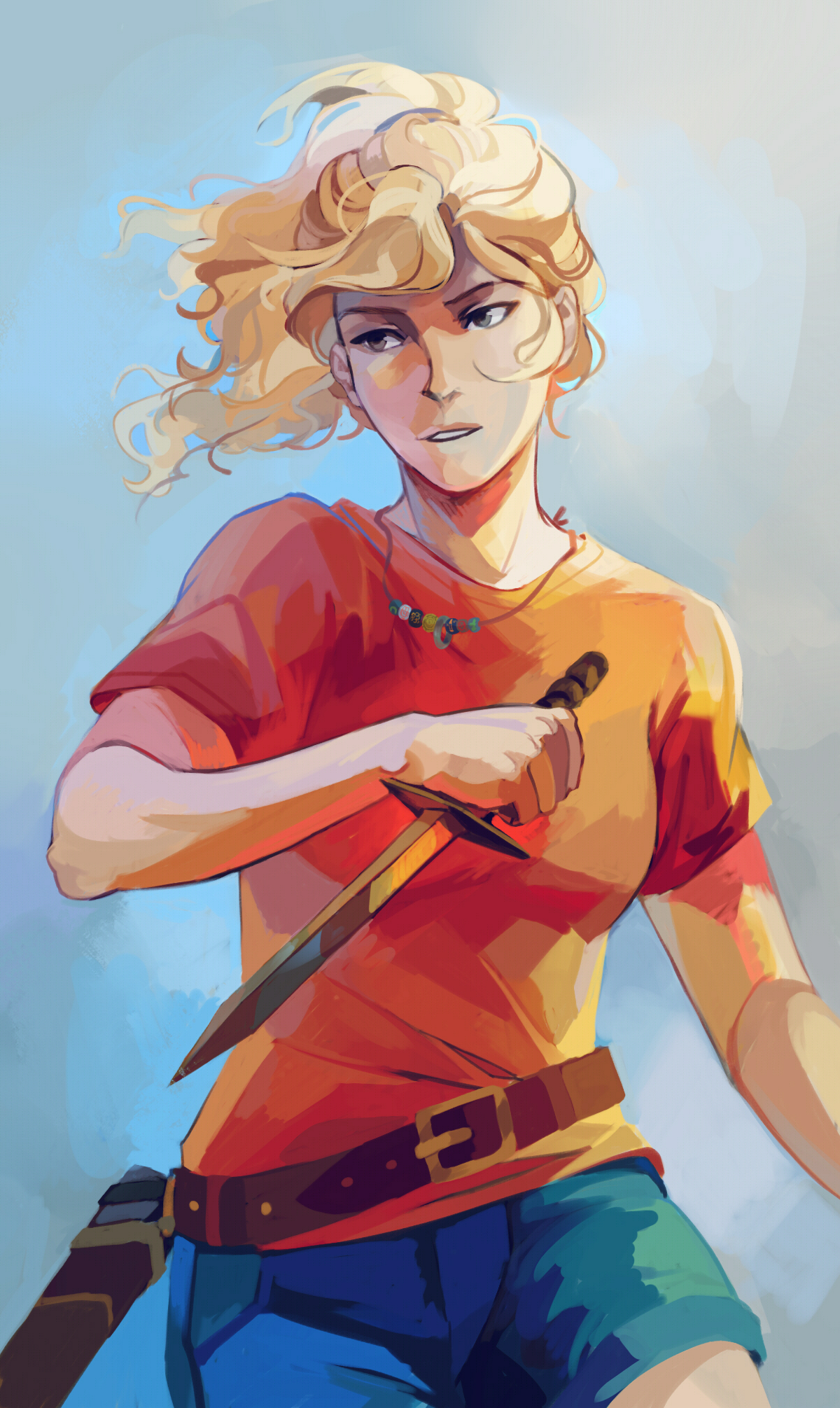 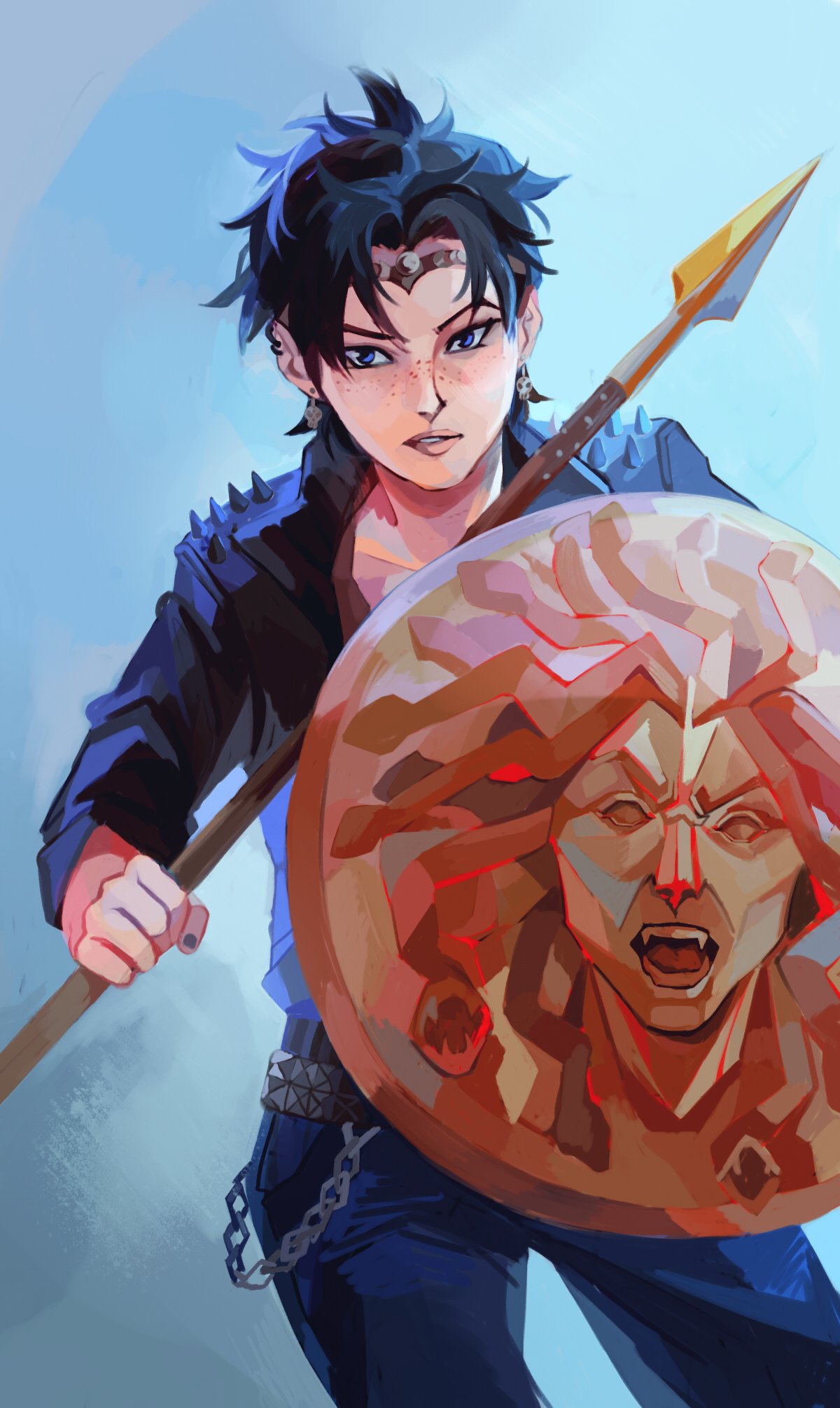 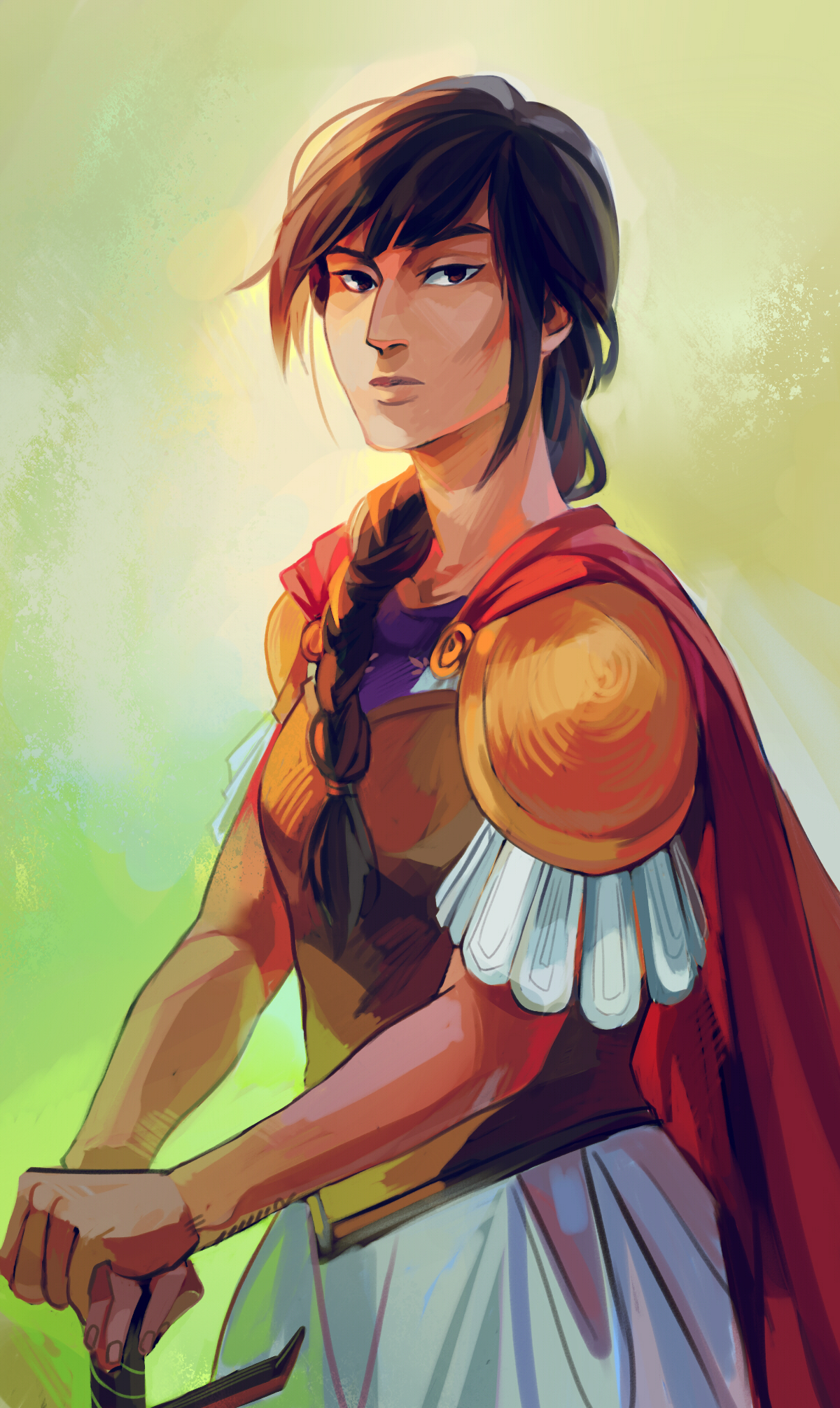 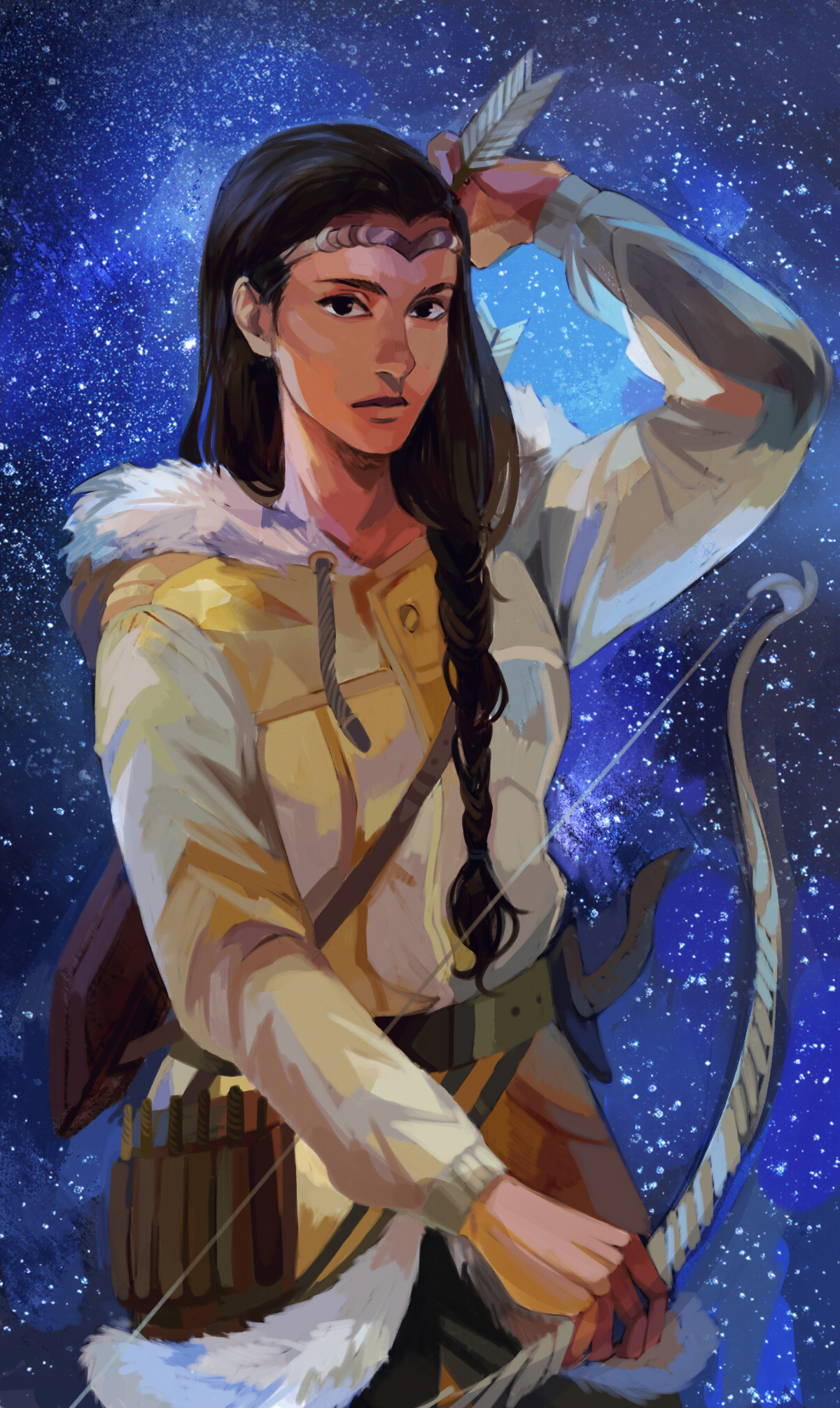 Mine was The Throne of Fire. 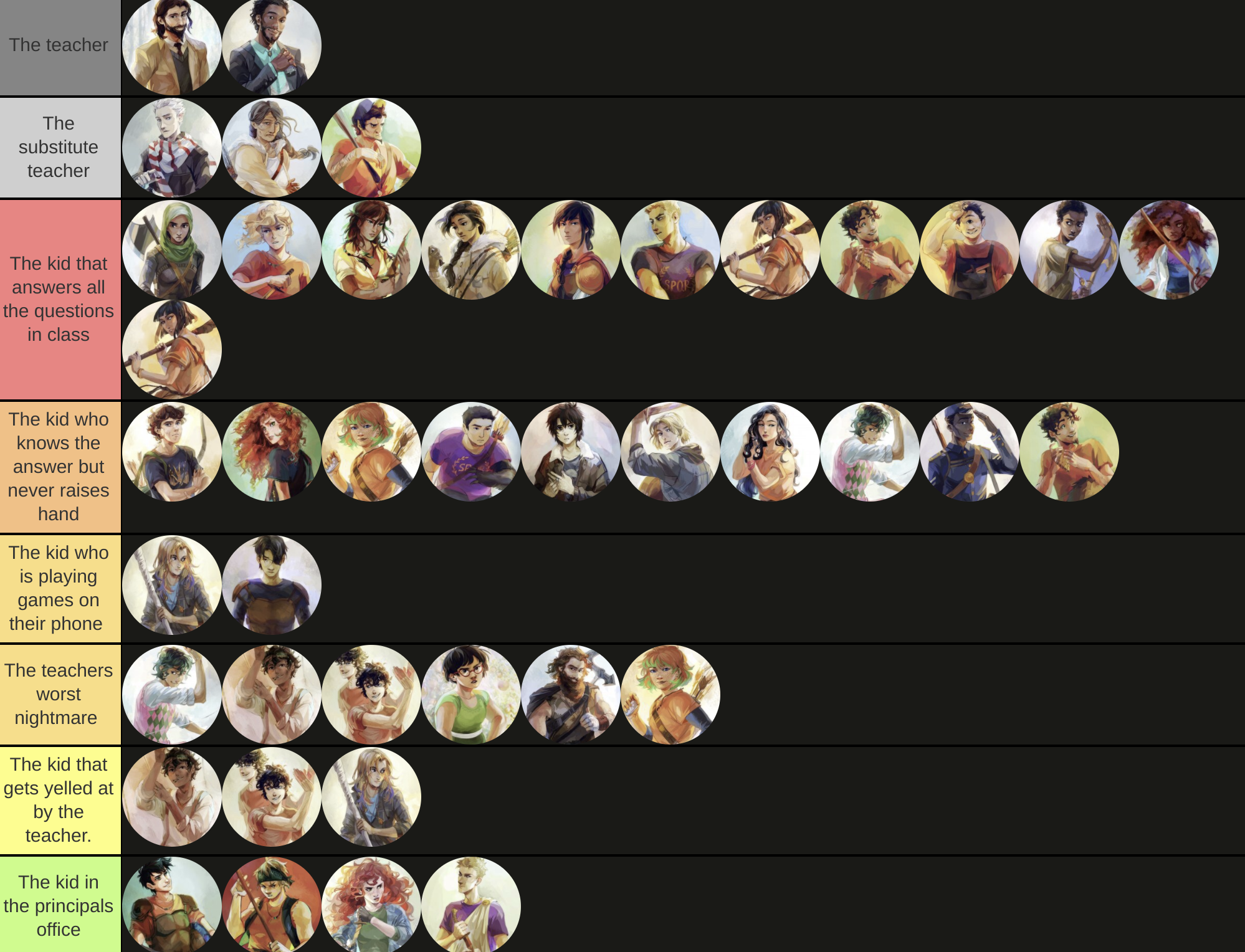 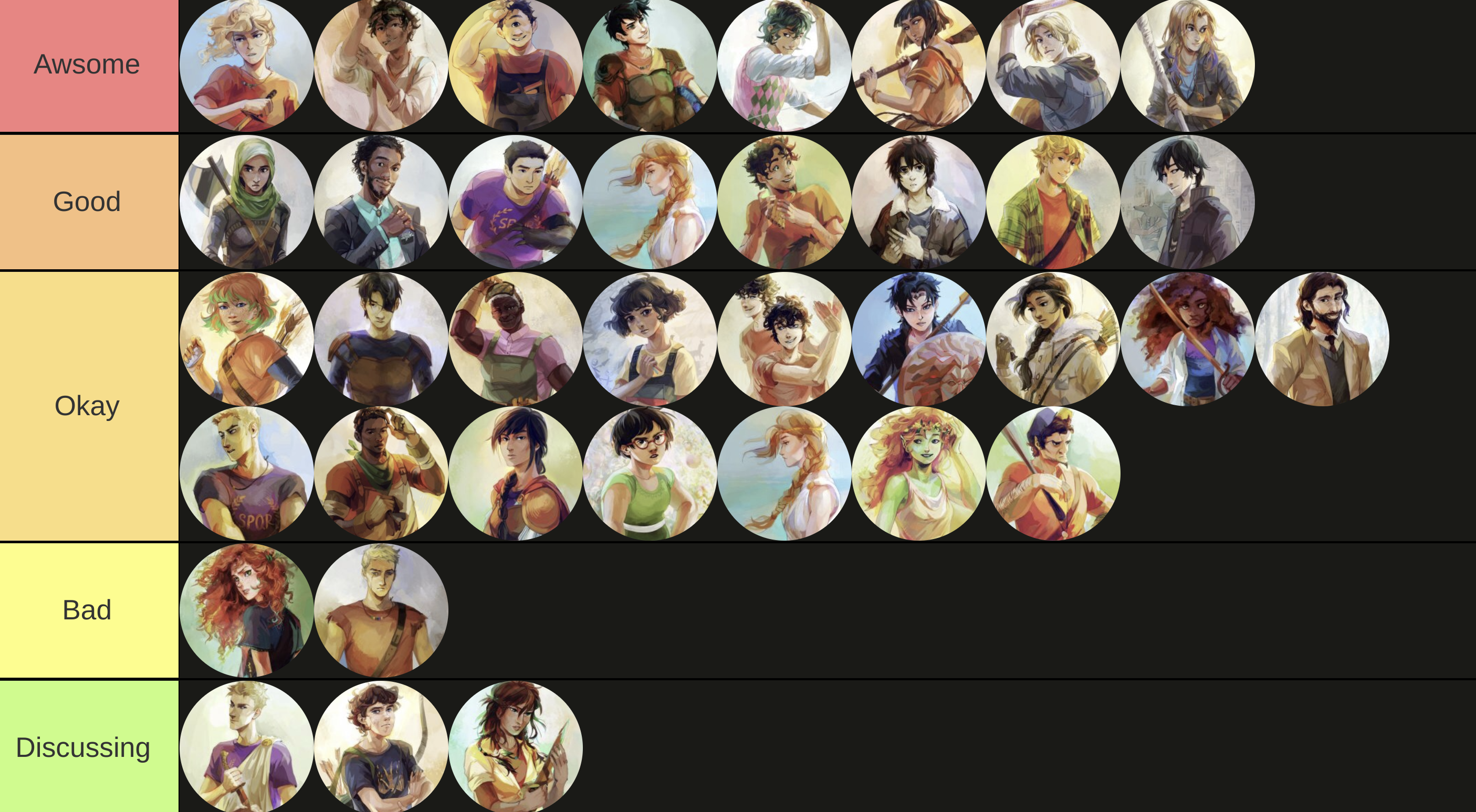 Hey y'all I decided to post my opinions on everything (not literally) about Riordanverse! I'm just not doing Piper because there is already an official post about her! Anyways, first one is Calypso! Check for that soon!!

Yours in demigodishness and all that, 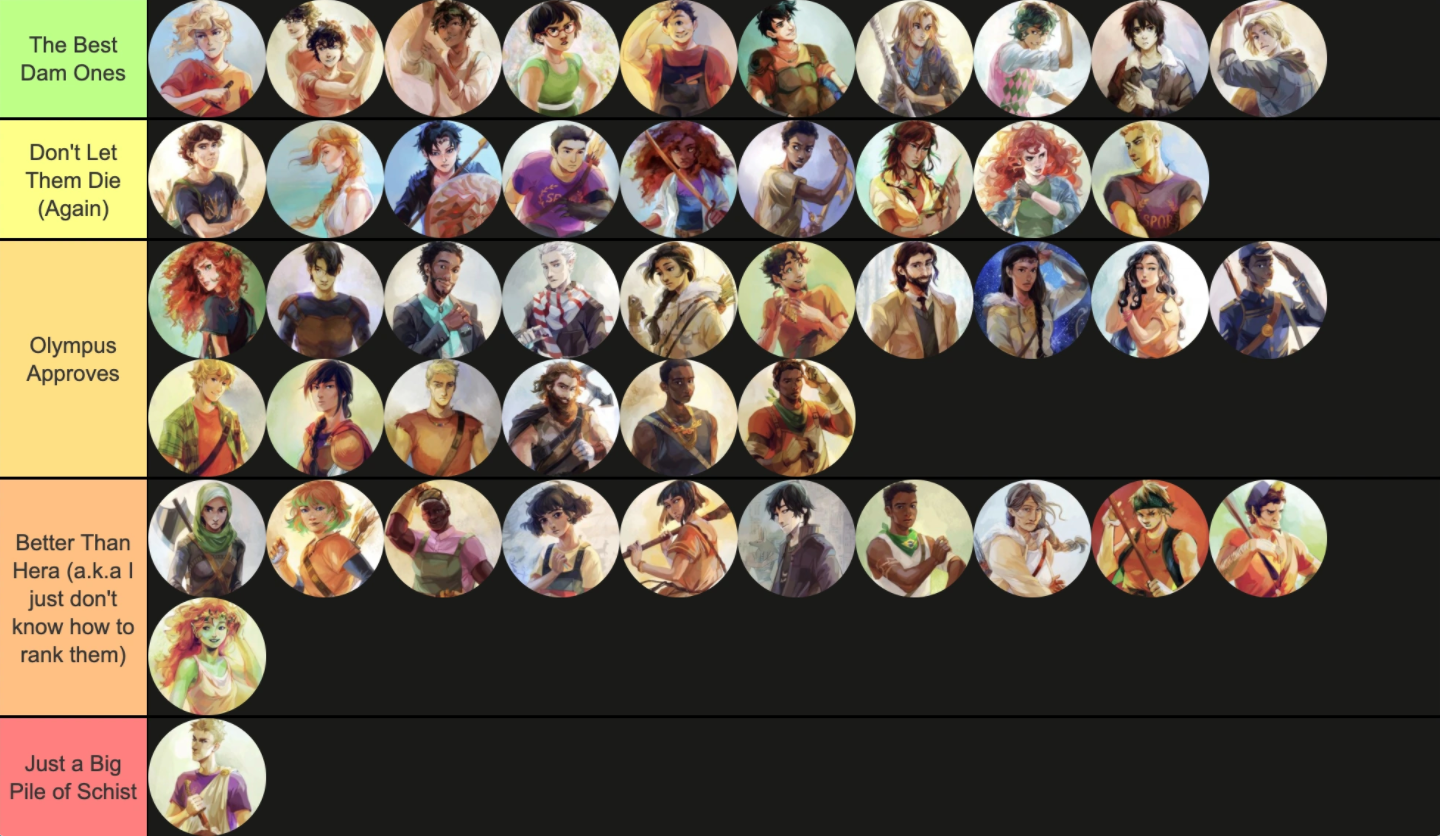 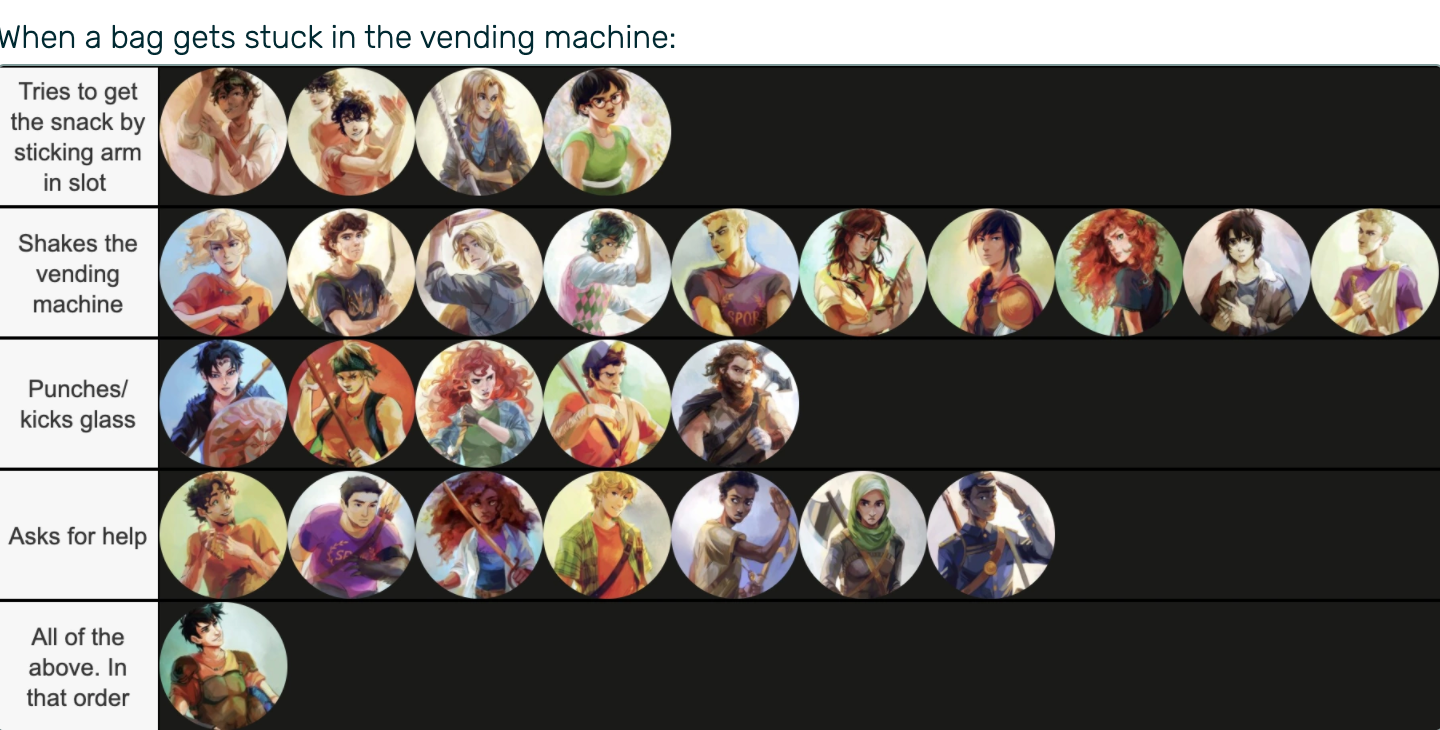 (This was based on a meme I saw, but this is how I viewed it) 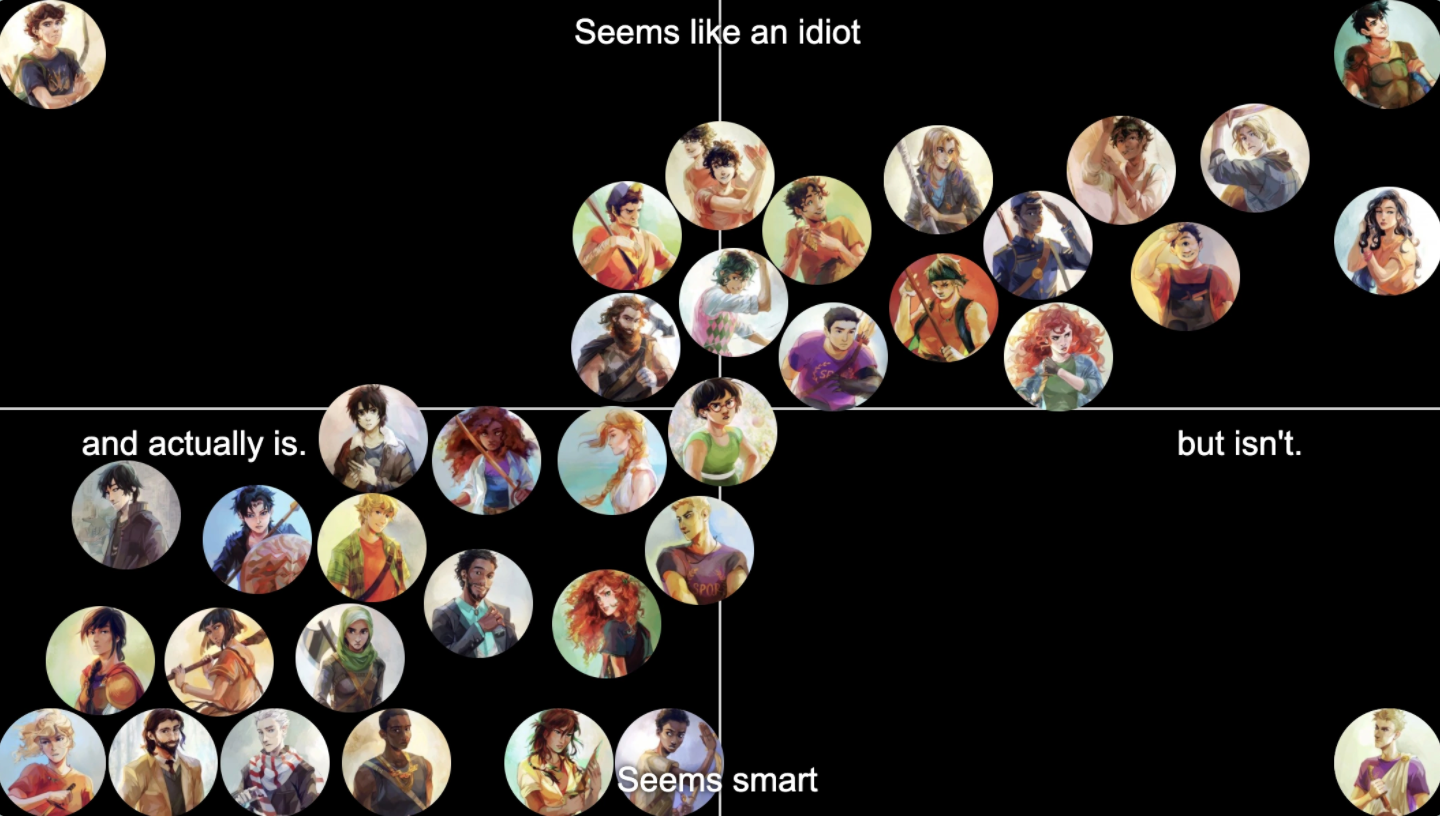 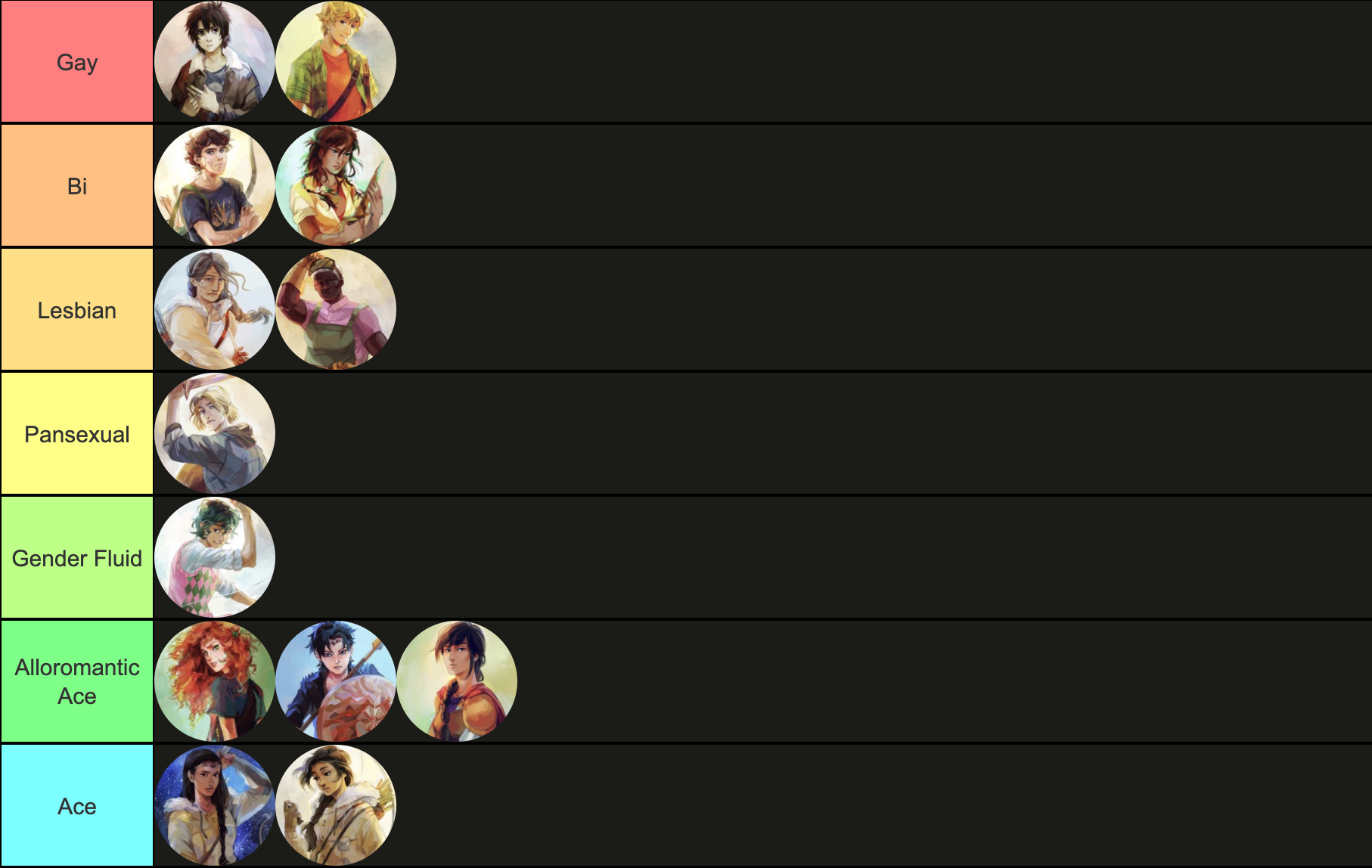 Includes Kane Chronicle, PJO, HoO, MC. I couldn't recognize every single one of them so I guessed on some- but yeah... 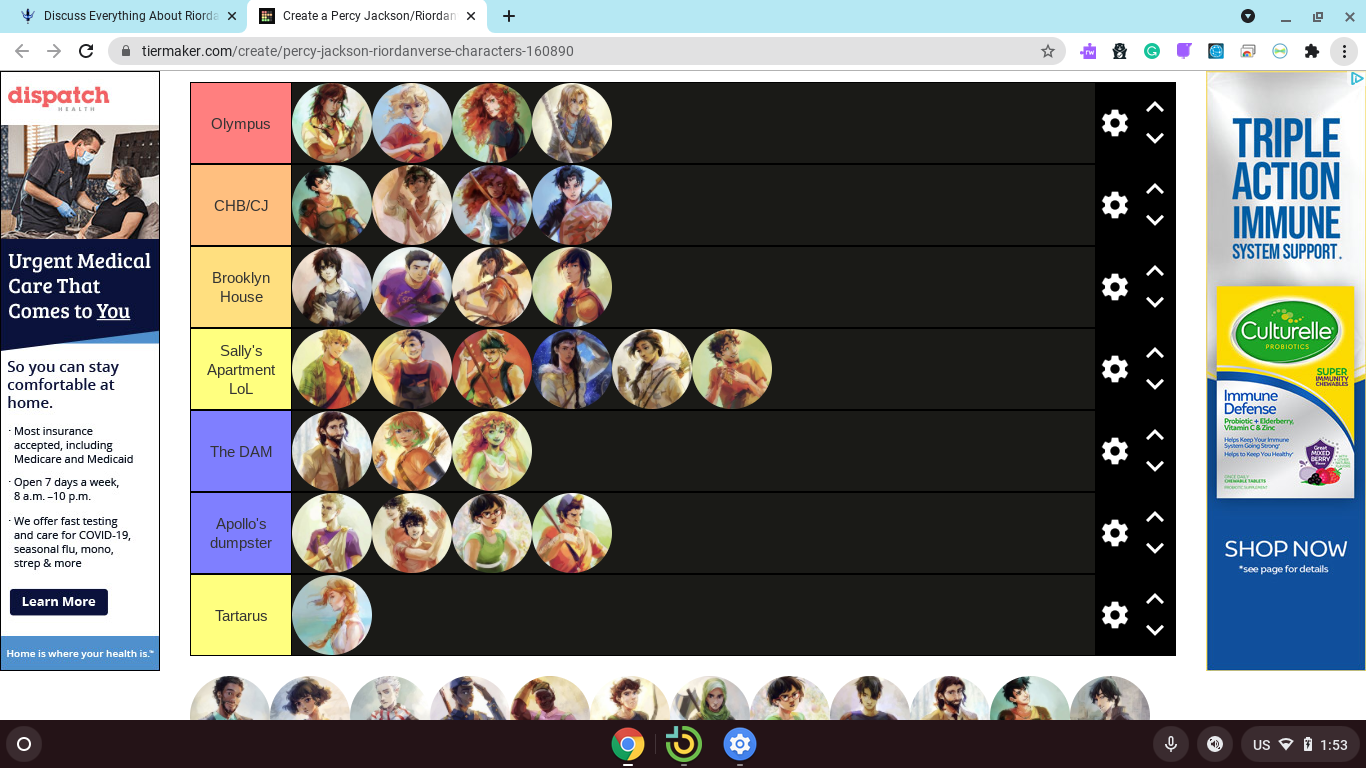 Annabeth was homeless for about a year (WHEN SHE WAS 7!!!!!). Thalia was for probably a little over a year. And as i mentioned in my last one, Luke was homeless for five years. So dont say Annabeth and Thalia can’t handle things. And they were all being attacked by monsters the whole time. Let me remind you 7 YEARS OLD!!!!

Heyyyy y'all, since there will be a TV show, what are your thoughts if the characters' races change? Just a reminder,

Disney’s company policy, which says: We are committed to diverse, inclusive casting. For every role, please submit qualified performers, without regard to disability, gender, race and ethnicity, age, color, national origin, sexual orientation, gender identity or any other basis prohibited by law.”

Ok, I don't ship Theyna (Thalia x Reyna) as a loveship, so please can you tell me why you do? They are both (spoiler ToA) huntresses of Artemis and they can't fall in love with anyone (said the Jeyna shipper). But really guys, does Theyna have a sense?

Hi, um, how the heck do you pronounce Thalia? I've asked like a thousand different people and got back so many different answers.

So Thalia died when she was 12, right. And she was turned into a pine tree. Did i miss something cause shouldn’t she had come out a 12 year old? Her Wiki says 15, and the books said 15 im pretty sure. Ik she’s immortal know, but shouldn’t she then had been an immortal 12/13 year old? I just don’t remember the pine tree aging her slowly.

I know you probably read the title and think that I am a maniac, lunatic, and straight-up idiot (I can be sometimes).HOWEVER, Hear me out and read my conspiracy theory. Before I begin I must say something. I 100% love Percy Jackson with every ounce of my being this is just a theory that I have been thinking about as of late. Let's get Started

After the Lightning Thief, Uncle Rick automatically wants us to be like

However, what if he did this intentionally to trick us. Warning before I continue this one theory contains many others. Happy Reading and Raging!

Luke is pretty big in this conspiracy theory. When we found in the lightning thief that he was the one who "betrayed" Percy we all had one question. Why? I think that uncle rick does a good job explaining this because he makes it pretty clear why Luke is resentful of the gods. For starters, he is mad and blames them for what happened to Thalia and his mom (May Castellan). Also since he was a child of Hermes he grew up in Hermes cabin. He literally watched kids have their parents ignore them. To be honest, here I would hate the gods if I saw that too. So when he "betrayed" Percy and tried to destroy the face of the earth and destroy the gods the question is:

Was he a good person for doing so?

If you ask me, yes. The only reason he made that mistake was to seek justice and revenge for the way the gods treated him, his friends, and others. Yes, he made a big mistake but as Luke learned all of our actions have consequences be it good or bad. Luke suffered the consequences by having to sacrifice himself to save the world. He didn't do it for his mom or Thalia or Annabeth. No, he did it for the entire earth. Making Luke Castellan a good guy

Percy obviously has a part in this. I want us to take a look at something I wrote earlier that everyone should have established

Yeah, that Line. So as we just read Luke Castellan can be considered a good guy. So if we do a switch up here. Oh, wait. Oh no, this can't be right. Believe what you read folks. Luke=Good so Percy.......

Why do I think this? Well for starters he was battling a good guy. Second, He is fighting for a cause that is not worth fighting for.6/12 gods dislike him. There are only 3 that are kind to him. And the other three have mixed emotions about him. So why fight a battle for people who don't like you? Like can someone explain this to me? Also in the HOO series in Mark of Athena Percy says

This just further proves my point. Name one demigod that has not ever shown some sort of resent to their godly parent. I'll wait.

If you guys want more conspiracy theories give me what to argue in comments.

Also I didn't do Octavian and Percy because, well you can figure it out why for yourself

Twins of the love goddess and the Lady of Light,

Must unite and set an ancient grudge right.

A friend shall be found along the way,

And together, four shall save the day.

Annabeth-Stronger (What Doesn't Kill You)

Here are some non-canon ships. You can choose who you disagree with. And by the way, I don't ship all of them.