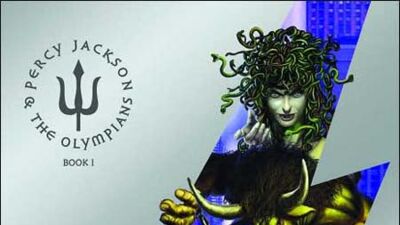 This article is about the book. For other uses, see The Lightning Thief (disambiguation). The Lightning Thief, written by Rick Riordan, is the first book in the Percy Jackson and the Olympians series. The book was adapted into a motion picture and a graphic novel in 2010. This book tells of the... 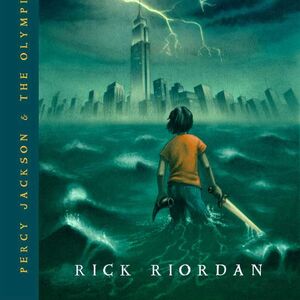 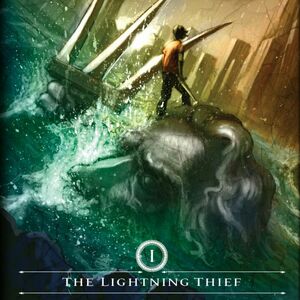 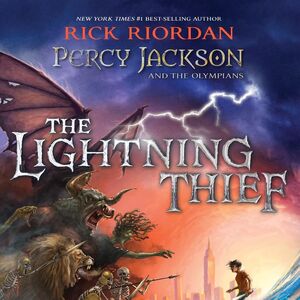 So I was listening to the lightning thief musical extra songs when I heard this:

They'll kill each other, or they'll kiss

If we're lucky, they'll end up in an abyss"

You know what else can be considered as an abyss?

What did you do Grover... 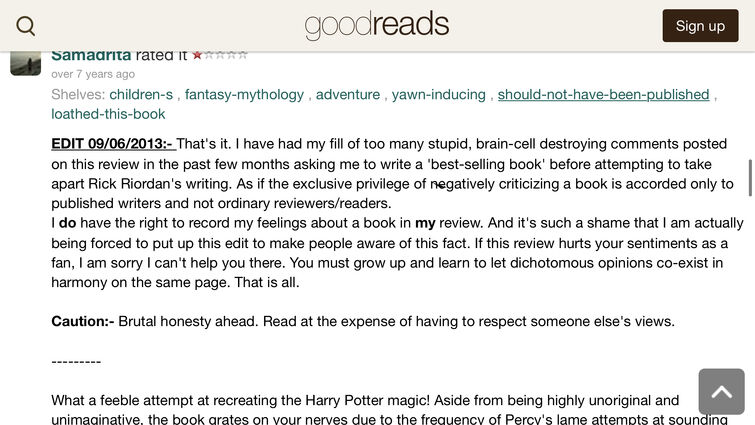 Fine the next half 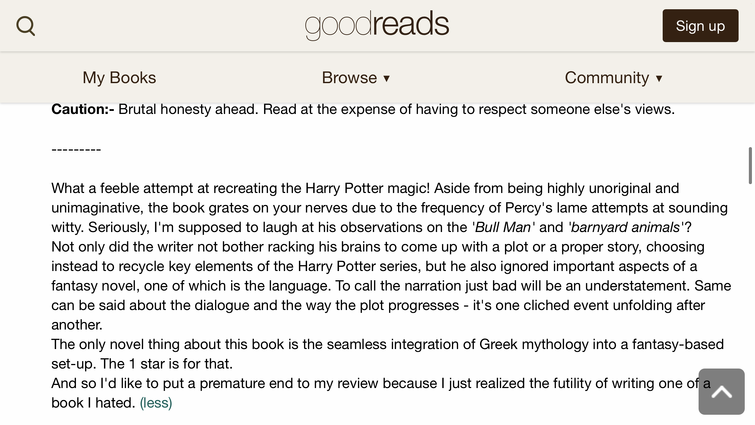 I was making my dads Gf listen to TLT and we got to the part where Annabeth is explaining the rivalry of their parents to Percy she told me to Pause it and asked me “so do they become like the Romeo and Juliet of the story” which is ironic because their story ends in tragedy but we’re just gonna ignore that but then she looked my up and down for a bit and i think my face gave everything up because then she smirked and said “knew it, the OTP”

Hey, was rewatching the pjo film (the adaptation of pjo (TLT))don't ask why, and in a scene, Percy heals Annabeth's hand while holding it in the water. Can Percy transfer his healing onto others?

So, now that I am back into the fandom, after quite a huuuge time, I have decided to do these plot holes series. This would be weekly and each post will have be centred around plot holes from one book. This is the first post containing the plot holes from The Lightning Thief.

Luke mentions that some of the things that Hermes represents are "Messengers. Medicine. Travelers", though Hermes is not the god of medicine, Apollo is.

Luke claims to have only seen Hermes once in his life (when he was 14). However, since Luke attended the campers field trip to Olympus during the Winter Solstice (during which all of the Olympians must be present), he should have seen Hermes there as well.

Before Ares decides to battle Percy himself, he sends a fierce wild boar to attack him. Percy notes that the boar is "even larger and uglier than the one whose head hung above the door on cabin seven". However, Cabin Seven is Apollo's Cabin; Ares' cabin is Cabin Five.

It is physically impossible to fall from the Gateway Arch in St. Louis into the Mississippi River, as the Gateway Arch does not span the river. However, Percy Jackson supposedly did so in The Lightning Thief. It is in fact almost five hundred feet from the edge of the Mississippi River normally. Falling straight down would land Percy in the middle of the grassy park of the Jefferson National Expansion Memorial. Though Poseidon and/or Zeus may have been helping him, knowing he would be vital to future prophecies.

When Chiron reminds Percy of Poseidon and Hera's unsuccessful Olympian riot against Zeus (which was addressed in question 38 of his final exam), Percy recalls that Zeus was trapped in a golden net. However, in Percy Jackson's Greek Gods, it is revealed to have been a magical rope instead.This could have been Rick Riordan showing how basic Percy's knowledge of mythology was.

When Chiron corrects Percy's mistakes about Kronos and the Titanomachy, he mentions that the extremely powerful emetic Zeus gave Kronos was "a mixture of mustard and wine," while in Percy Jackson's Greek Gods, it is actually revealed to have been a mixture of mustard and nectar. In any case, Zeus could not have used wine, since that particular beverage was invented by his son Dionysus, many years after the Titanomachy.

Remember in tlt Percy, Annabeth and Grover go to the Lotus Casino for 5 days, but it felt like only a few hours for them? Doesn't that mean Percy is 5 days younger than what he should be, meaning that the prophecy was inaccurate, because Percy wasn't technically 16 yet? Idk, it's just a random thought I had

I finally got my friend @Nightfurytamer3 to read TLT and she liked it !!!!!!!

I didn't have to do much , just had to watch a tv series she likes in exchange

Im trying sssssssssooooooooooo hard to not spoil anything

The Lightning ThiefSea of Monsters
This post is locked.

I say I'm new but I just mean to this site. I've read the books and everything. Except for the ones on Magnus Chase. Here are a few things about me:

Parent: If Atemise has children then I'd be her daughter but I'd be the daughter of Ares

Books or Movies: Okay so don't kill me. I actually like the movies but I love the books.

Favorite book: The Lightning Thief. Mostly because it's how it all got started and I love how Percy is confused about everything.

Weapon: My weapon would be bow and arrow but I just got a new dagger and I tested it out for knife throwing and I did pretty well. 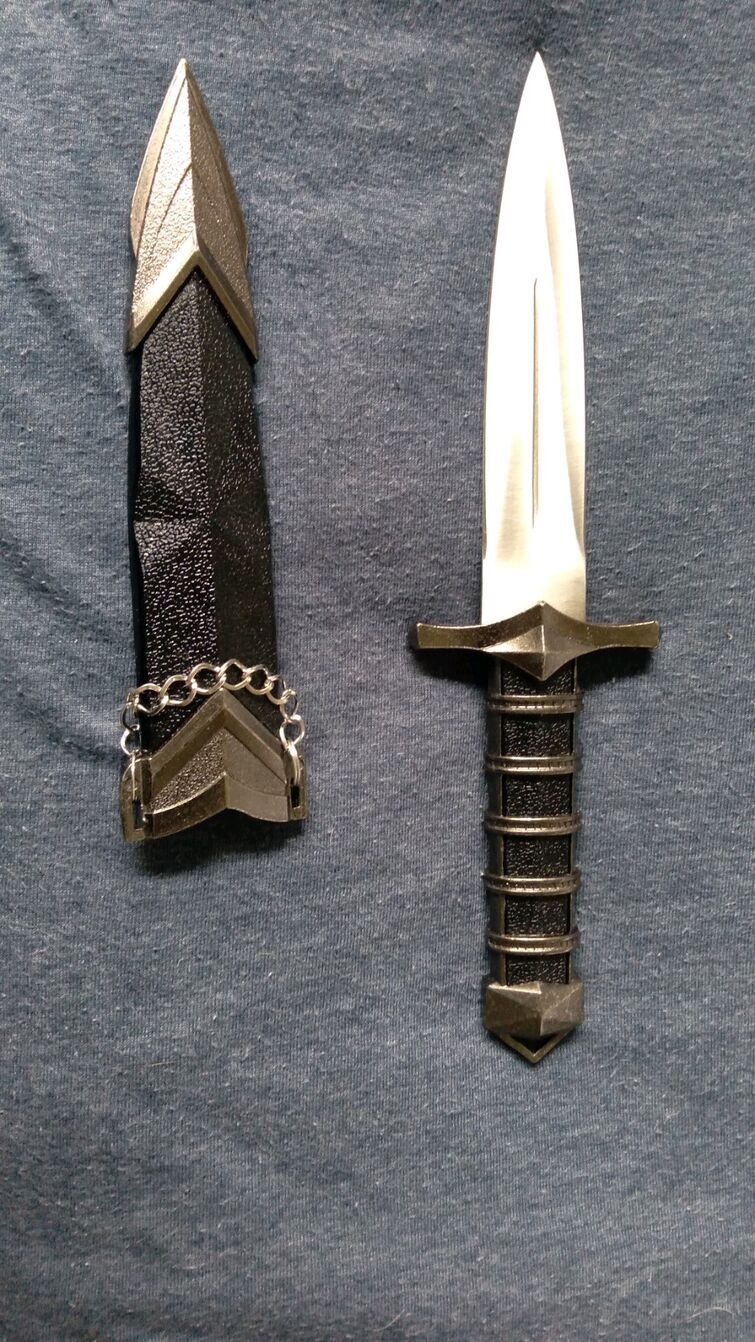 I think I've figured out what ambrosia and nectar are made from!

Take a look at this excerpt from The Lightning Thief in Chapter 7, page 105:

'I scraped a big slice of brisket into the flames.

When I caught a whiff of the smoke, I didn't gag.

It smelled nothing like burning food. It smelled of hot chocolate and fresh-baked brownies, hamburgers on the grill and wildflowers, and a hundred other things that shouldn't have gone well together, but did. I could almost believe the gods could live off that smoke.'

And what are ambrosia and nectar? THE FOOD OF THE GODS.

So we are doing an elimination!! Vote for the one you want eliminated. This will be from all the Riordanverse (including RRP). This will include books, characters and ships.

Battle of the Labyrinth

Hear me out for a bit here.

I say this because:

2) He had the sea with him. This doesn't speak for his swordplay skills.

3) The 'Ares is a god' argument isn't correct either. He wasn't going all out, and he was fighting at the level of the most skilled human swordsmen, not as a god.

Waiting for lots of hate...

“I like girls! I think they are very nice 😌”