@SayuriDarling This is to bring to your notice that @Tabby the overated quizzer has last edited the page of Piper McLean and there is some disturbing content in the page right now.. 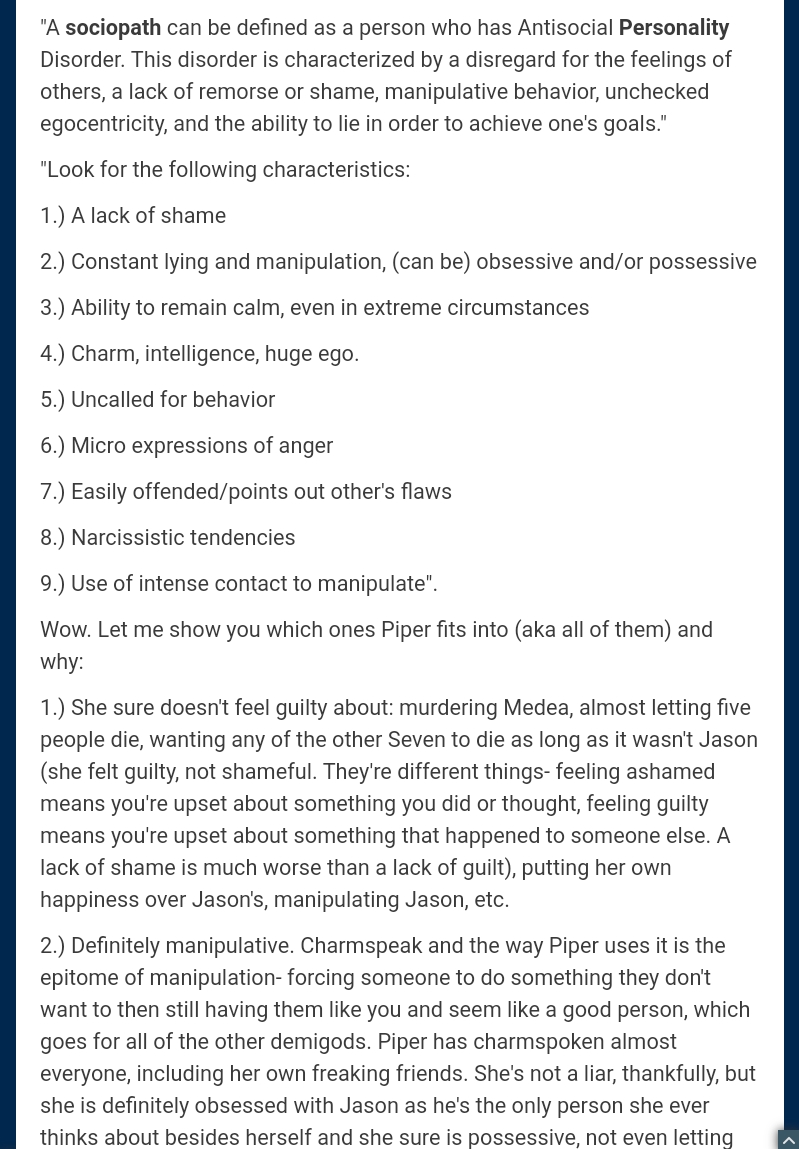 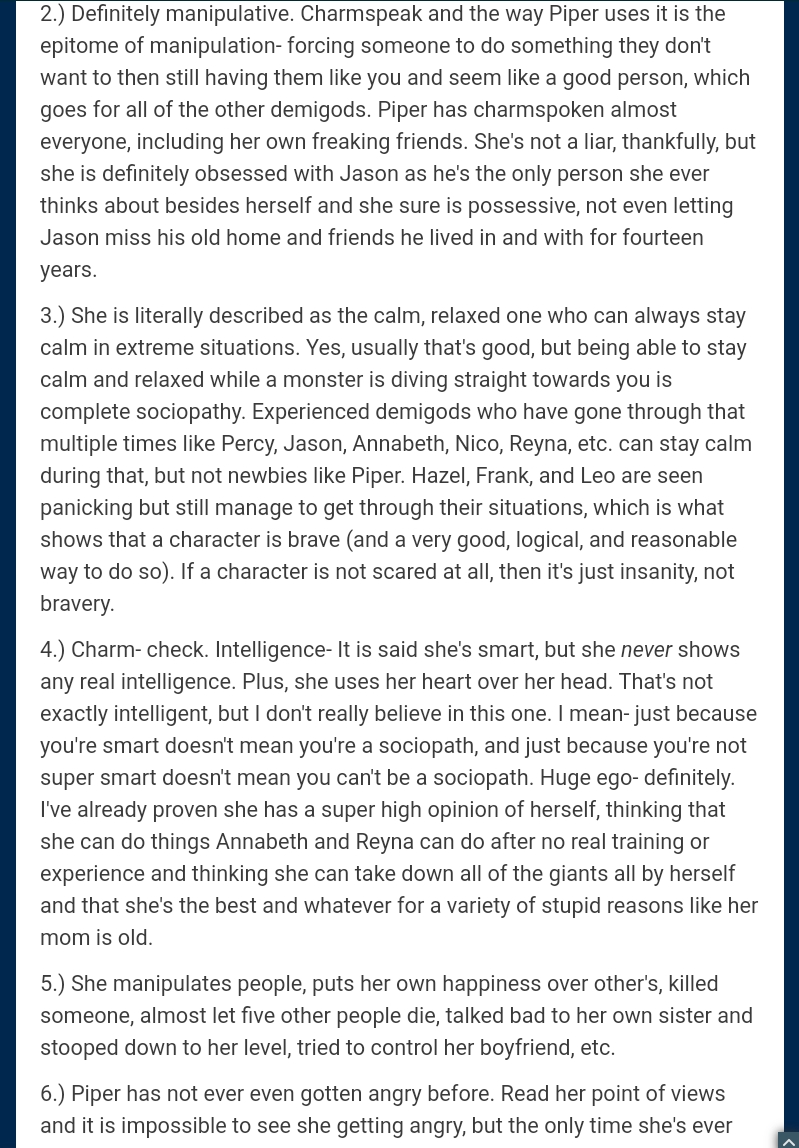 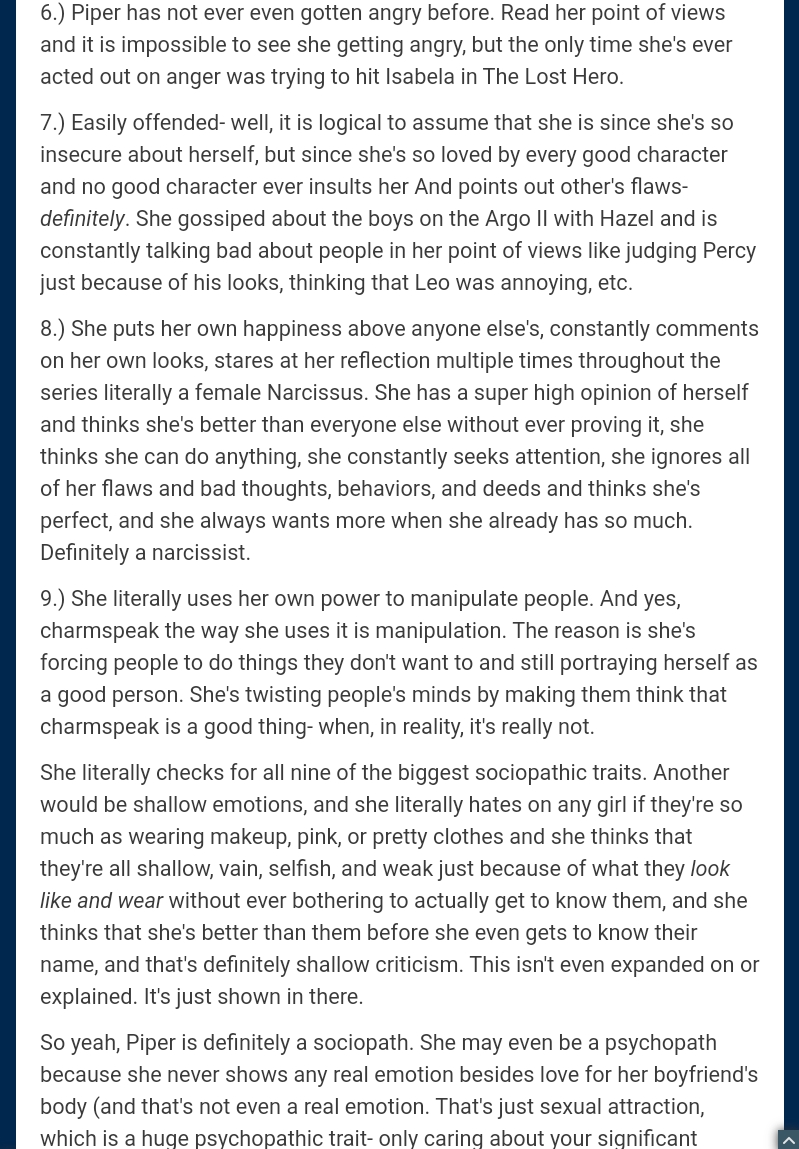 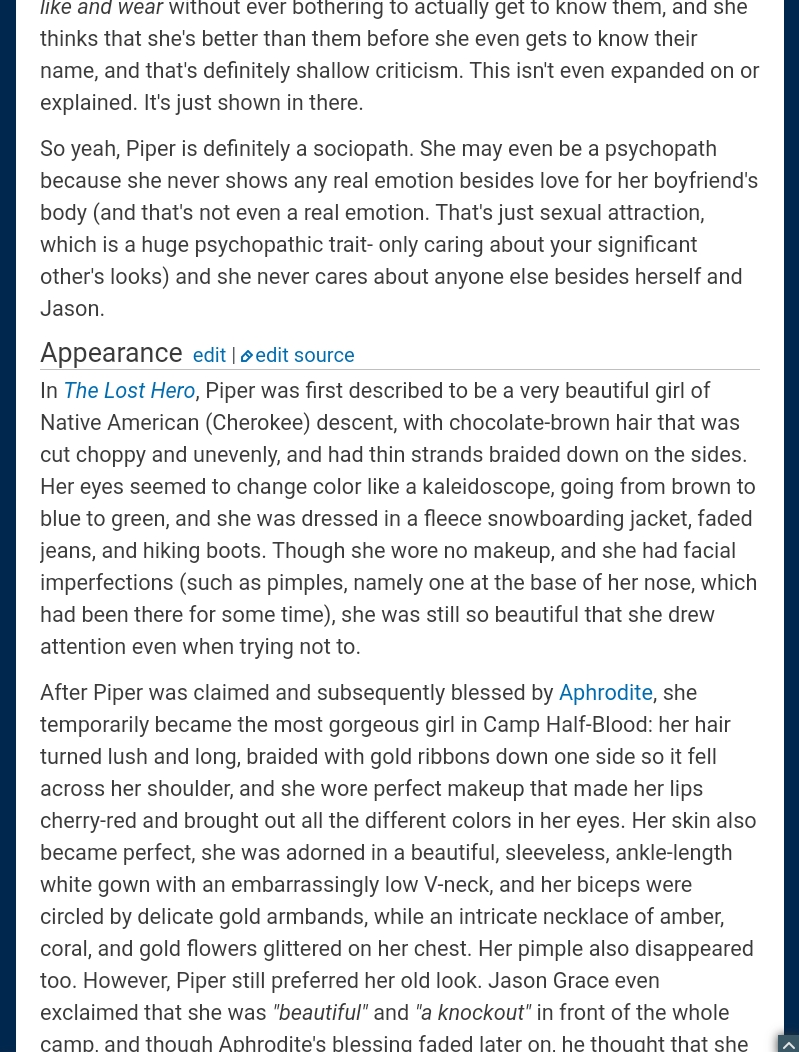 Please look into it. Thanks!

Piper McLean
A reply to EmilyGray13
0

Why, thank you!! *does a horrible curtsy*

I kinda liked Nero, cuz he was an ideal villain.. he knew manipulating minds and was so great at it that he managed to get Python on his side..

Hate is Commodus cuz he didn't actually add much to the plot.. he was all narcissistic and well, useless..

The Triumvirate | FandomSince, the dboard is really dead, here's a small…riordan.fandom.com

Since, the dboard is really dead, here's a small not-so-challenge for y'all!!

Out of all the three of the triumvirate, who is better, and who is worst? And why? Reason is compulsary!!

Triumvirate Holdings
A reply to Lourin
0

*has an idea but dunno if it could work*

And to be honest, most of the posts these days have less to no content (i.e "fav character", "who is powerful" and all..). So, there's nothing for us to discuss about.. :(((

Is it just me or almost half of the posts posted are either getting locked of deleted these days..

I'm sorry, but I won be doing the tournament. It'd be hard for voting and I can't allot points as it's a tournament and it won't be fair too.

Reyna isn't one of the seven, but she has really good skills and is better than Annabeth. Here's why!

• She's the daughter of a war goddess.

• She has trained longer.

The wolf house. All the Romans are trained by the wolf goddess herself. Only those worthy are sent to camp. And Reyna is one of those. She even made a really great praetor for Camp Jupiter. And taught there. Teaching and training are totally different. Teaching lets you explore new boundaries and reaching thise new boundaries. It also helps you learn and see things from a very different angle. While on the other hand, Annabeth has only trained at Camp Half-Blood, not taught.

• She is very smart.

One of the very much overlooked things about Reyna is that she's really smart and wise when it comes to making decisions. She couldn't beat Annabeth in strategic warfare, but is definitely competitive to her, and is a really worthy opponent to the daughter of wisdom.

This one doesn't count much, but it's enough to make it to this list. Her joining the hunters gives her half-immortality. She can not die, unless fought down in a battle. And her constant hunting for very ancient animals keeps her in touch with the godly world. She wouldn't actually forget the training even if she takes a break. But Annabeth has a life. She may get married, have kids and grow old.

Reyna spent nearly half of her life as a praetor at Camp Jupiter. After Jason disappeared, she was the single praetor of the camp. She even resisted sharing her leadership with other legionnaires such as Octavian.

As a daughter of Bellona, she is capable of sharing her powers to those in need and boosting them up. This skill is definitely not shown by Annabeth. She would also do great as a hunter of Artemis as the hunts would include a lot of teamwork.