Amos Kane is Carter and Sadie's uncle, the younger brother of Julius Kane, and the current Chief Lector, being the most powerful magician in the world.

Not much is known about Amos's past except that he presumably grew up with his brother, Julius, and trained as a magician in the First Nome, becoming a member of the House of Life. He was the last member of the Twenty-first Nome, located in Brooklyn, before Carter and Sadie arrived. He lived in Brooklyn House with his pets Khufu and Philip of Macedonia. He was present for Sadie's sixth birthday party and was splattered with icing when the siblings accidentally made the cake explode. Julius says Amos was never his match, so if Julius wasn't dead (or exiled), he would be Chief Lector before Amos, possibly before Desjardins.

When Amos begins to suspect that his brother will attempt to release Osiris, Amos becomes concerned and tracks Julius down in England. Apparently knowing that Julius intends to Try and bring back his late wife, Amos begs him to reconsider, expressing concern for his niece and nephew, but Julius ignores him. When the five gods are released from the Rosetta Stone, Amos is possessed by Set. While possessed by Set, Amos attempts to do what he can to tip off others that he is not himself, including using chaos magic, despite the fact that Set forces him to use his own magic reserves, endangering his life. The uninformed Sadie and Carter, however, do not catch on and when Carter has a vision of Set, Amos pretends to investigate and feigns capture.

As Carter and Sadie draw closer to Phoenix and defeating Set, Amos rejoins them and escorts them back to Set's base. Despite the fact that it has become increasingly obvious that their uncle is not himself and the fact that Zia Rashid can sense that he is possessed by Set himself, they take no action until Set reveals himself. Carter and Sadie are able to defeat Set and bring Amos back to Brooklyn, but the experience of being possessed by Set is traumatizing for Amos. When Carter and Sadie visit their father in the Land of the Dead, Julius asks for them to pass along a message for Amos, advising him to remember that the Egyptians thought of the sunrise not just as a new day, but a new world. Shortly later, Amos begins to show signs of recovery and declares that he would travel to the First Nome and visit the healers there.

Having returned from the first Nome, Amos starts the book at the Brooklyn House helping out Carter and Sadie. When The House of Life attacks, Amos leads the magicians in training against the attack. At the end, he becomes Chief Lector of the House of Life as with Desjardins dead, he is the most powerful magician in the world. However, his claim is disputed among other Nomes, and magicians like Kwai and Sarah Jacobi form a band of rebels, who hate the Kanes.

After learning of the impending threat from Sarah Jacobi and her rebels, Sadie takes a scared Leonid to see Amos. Amos is shown looking over Iskandar's old war map and admits the war is not going well and is stunned to learn from Leonid that it's because Jacobi and Apophis are working together. He is also stunned by Sadie and Carter's plan to destroy Apophis and restore Bes, but supports it, sending Zia Rashid to help. Zia believes this was to give her time away from Ra as being near him was clouding her thoughts and causing her to blackout more and more which Amos had been trying to help her with. Without Zia there, he assigns Bast to watch Ra which she does at Brooklyn House. Carter eventually realizes from various clues that Amos is now following the Path of Set and channeling that god's power. When this fact is learned, the Kanes become worried about him since Set possessed him before and it nearly destroyed him. However Set, indicating that Amos sent him, appears to Carter and reassures him that he is not manipulating or using Amos, saying that Amos summoned him not the other way around. To help with the upcoming battle, Carter sends him Brooklyn House's trainees and Bast. During the battle, Amos hosts Set directly, but is shown to be able to control Set this time while channeling his powers. Carter uses this as a convincing argument that Amos is not evil, but Amos falls after being ganged up upon and is used as a hostage by Jacobi to stop the battle. However, when she threatens Sadie, Walt Stone, hosting Anubis, steps in and kills her and defeats Kwai. When Kwai casts a spell with his own life force to bring down the Hall of Ages, Amos is unable to do anything even with the power of Set, but Sadie manages to stop the collapse by casting Ma'at. With Jacobi and Kwai dead, the rebels switch sides and Amos offers Carter his rightful position as Pharaoh of the House of Life. Carter accepts and leads both the gods and magicians into battle and he and Sadie destroy ultimately Apophis forever by execrating his shadow. Like all of the other gods except Anubis, Set leaves Amos again and leaves the Earth for a time with the other gods. Amos later officially crowns Carter as Pharaoh of the House of Life, though Carter leaves him in charge of the House while goes to school and lives the life of a normal teenager.

Though a powerful magician, Amos is kind, easy-going, and gentle. He is very loving towards his niece and nephew and truly wants what's best for them.  Amos cares deeply for his brother as well, though in previous years he seemed distant due to Julius' banishment. He also welcomed Julius' wife, Ruby, into the family without any antagonism or bad feelings, unlike the Fausts. Amos is also extremely intelligent and knowledgeable, having a great knowledge of Egyptian Mythology, and even some Greek, since he knows that Manhattan has "other gods" (the Olympians), and that Mount Olympus is located over the Empire State Building.

Amos is described as being tall, barrel-shaped with skin the color of roasted coffee. When the Kanes first see him he is wearing a trench coat and a fedora. He wears pinstriped suits, coats, and hats; he also tends to braid his hair with gems to match. Carter considers him to have 'style', and adds that Amos reminds him of a jazz musician. Sadie describes him as smelling of 'old timey' spices, like an incense shop, and looking like an African American version of Al Pacino. Both Carter and Sadie say he has a twinkle in his eyes, but they're always full of sadness. In The Throne of Fire, Amos becomes Chief Lector and starts wearing the traditional long leopard-skin cape. When he finally coronates Carter after Apophis' defeat, Amos changes into a crimson suit, red-tinted sunglasses, and braids his hair with garnets. Carter thinks he did this to play up his connection to Set.

Amos used to be the former host of Set. He was twisted against his will and his sanity became at risk after the hosting. Even though Amos despises Set, he admits that he needs his full powers to fight Apophis and becomes the Eye of Set once again. These are the abilities he could only do when being the host of Set:

Although the details of their relationship are scarce, the brothers seem to care very much for one another. Amos attempts to dissuade Julius from going to the British Museum and releasing Osiris for fear of his brother's life. Likewise, Julius was concerned for his brother when he became traumatized by being possessed by Set and offers him wisdom and kind words. When asked about the fight they had over Julius' plan, he dismisses it, saying that they used to fight a lot, indicating that though they were close, they had their disagreements but didn't let that get in the way of their relationship. He also told Carter and Sadie that after Julius was banished from the House of Life and Amos was banned from seeing him, it was difficult for him as he cared a lot about his brother and niece and nephew.

Amos is shown to love his nephew and niece very much and cares for them deeply. He has, on multiple occasions, risked his own life on their account and they have also been shown to care for him: such as when he was recovering from being used and twisted by Set.

When Set is first set free, he possesses Amos and uses him as one of his hosts throughout The Red Pyramid, using him to go after Carter and Sadie. Set nearly burns out Amos' soul from the possession and abandons him, leaving him in a depressed and weakened state for a long time. However, Amos apparently gains an understanding of Set from the incident and when he decides to follow the Path of the Gods, he chooses to follow the Path of Set, drawing on Set for power and apparently communicating with him. Set works with Amos against Apophis, willingly sharing his power and it's indicated visiting Carter to ease his worries at Amos' request. During the final battle, Set takes Amos as a host again, but this time with Amos in control with Set seeming to mostly let him except when he tries to have "fun" by killing people, but Amos is able to keep him under control, something that is supposed to be impossible. 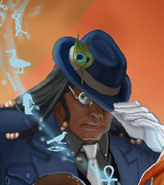 Amos on the cover of the graphic novel.
Add a photo to this gallery

Retrieved from "https://riordan.fandom.com/wiki/Amos_Kane?oldid=543810"
Community content is available under CC-BY-SA unless otherwise noted.