Animal Charming is one of the many paths a magician can choose to follow. Magicians that have this specialty are known as Animal Charmers. As the name suggests, Animal Chamers have the special asset (abilities) to control animals for good or bad. While there are few known charmers, many magicians attempt to follow this path. Initiates that follow the Path of a God occasionally have the ability to charm specific animals. Some animal charming magicians only bond with certain types of animals, for example reptiles or sea creatures, but animal charmers all have the powers to bond with all sorts of animals. However, some following the Path of the Gods as mentioned above may only be able to bond and charm with one or two animals that are unique to a certain god.

Gifts that generally come with being an animal charmer include shapeshifting, talking to or controlling animals, they can also change other magicians and objects into animals, summoning animals, etc. Animal Charmers are generally very good at changing their staffs into a variety of animals. 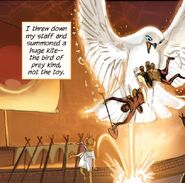