Aphrodite's cabin (#10) is the cabin that houses demigod offspring of Aphrodite.

Aphrodite's cabin has a painted roof, with pillars and a blue-and-white checkerboard deck with steps and gray walls. It is filled with beautiful girls with designer clothing and very good-looking, handsome boys. In The Lost Hero, the cabin is described as a pink 'Barbie house' with a pink door, lace curtains and potted carnations by the window.

The inside of the cabin smells very heavily of perfume. The inner walls of the cabin are pink with white window trim. The curtains and beds are pastel blue and green. The guys have a row of bunks separated by a curtain and their section of the cabin is just as neat and orderly as the girls'. Instead of bunks, the campers have twin beds with pale blue sheets in the graphic novel. Each bed has a blue dresser in between with drawers, a mirror, and makeup. Every camper has a chest with their name painted on it to store their belongings. Their personal bunk spaces are decorated with famous and attractive Hollywood movie stars and singers, and a few have personal photos too. The cabin is always clean except for under the beds, which had chocolate wrappers, love notes, and other things under them.

The cabin isn't seen in the film version of The Lightning Thief, although a group of Aphrodite girls can be seen waving to Grover Underwood in one of the scenes in the lake.

In The Lost Hero, one camper tells Piper about the rite of passage. For a child of Aphrodite to prove themselves, they must make someone fall in love with them and then break that someone's heart. It is unknown how this got started. At the end of the book, Piper decides to get rid of it after becoming head counselor. Silena Beauregard also broke the rite of passage tradition, when she fell in love with Beckendorf and stayed in love with him. 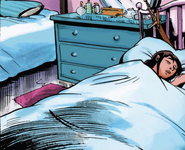 Add a photo to this gallery
Retrieved from "https://riordan.fandom.com/wiki/Aphrodite%27s_Cabin?oldid=531679"
Community content is available under CC-BY-SA unless otherwise noted.