The Argo II is a flying Greek trireme (that could also sail if the aerial controls are damaged) built by the Hephaestus' cabin for the journey of the seven demigods of The Prophecy of Seven to Greece. It was manned by Leo Valdez, Piper McLean, Jason Grace, Frank Zhang, Hazel Levesque, Percy Jackson, and Annabeth Chase. The Argo II was destroyed when Zeus launched them to Camp Half-blood.

During the Demigod Civil War, Bunker 9 was used as a command post for the Hephaestus cabin. An unknown camper designed blueprints for a flying ship that may have been related to a prophecy, as there is a note stating "Prophecy? Unclear. Flight?" While the designer was never known, the name of the blueprints led to revealing the name of the ship—Argo II. The creator never made the ship and eventually the bunker was abandoned. Decades later, Leo Valdez had a dream about the Argo II, made out of flames, when he was two, while he was still under the care of Tía Callida. When he was five years old, he drew a picture of a flying ship with crayons. The ship was decorated with flames and its masthead was the head of the metal dragon, Festus. Leo, however, lost the drawing in the wind though it was much later returned to him by Aeolus, the master of the wind.

The Argo is the original ship of Jason and the Argonauts, on which they sailed on their quest for the Golden Fleece. The ship was named after its builder, Argus. The original Jason was killed when its mast, built from a tree of the Grove of Dodona, fell on him and crushed him. The Argo II is named after the ship.

Years later, Leo discovers he is a demigod and is sent on a quest to rescue Hera, Queen of the Gods. Before they leave, Leo discovers Bunker 9 after repairing the bronze dragon that he names Festus. He sees the blueprints for the large ship he drew when he was younger, but focuses on adding a pair of wings to Festus. While visiting Aeolus to ask for help, Aeolus returns Leo's drawing of the Argo II (not named at the time) to him claiming that everything lost in the wind finds their way to him. Leo takes the picture and puts it in his pocket without showing Jason or Piper.

After the quest is completed, Leo shows Bunker 9 to the rest of Cabin Nine, including the Argo II blueprints. He shows them the picture of the ship he drew when he was five, and feels that the ship is tied with his destiny and says he is going to build it, with the head of the recently destroyed Festus as the mast head. When Leo pulls out his crayon drawing, everyone compares it, and they all find that the drawing and blueprint are the same. Then, he and the Hephaestus cabin start to build it, to sail to Camp Jupiter.

Percy has dream visions of Jason, Piper, and Leo finishing the ship and welding the head of Festus to the mast. However, the ship's samophlange breaks and Leo says it could take a few days to fix. At the end of the book, the ship appears on the horizon and Percy gathers Camp Jupiter to meet them in the Forum after he is elected Praetor.

The Argo II arrives at Camp Jupiter and attracts the attention of the demigods and the legacies at camp. Terminus intercepts them by appearing on their ship, telling them that they cannot proceed past his Pomeranian Line, and that they cannot land, so they convince him to let the ship float over New Rome instead. Leo is possessed by an eidolon and fires upon Camp Jupiter with the Argo II ballista.

Later, Leo plans on using Archimedes' spheres and other discoveries to upgrade the ship.

The ship gets attacked and damaged several times throughout the books, mainly from monster attacks, like the Shrimpzilla or wind spirits. The crew needed at one point to split up and look for supplies needed to repair the ship, which included lime, Celestial bronze, and tar.

The ship is attacked by earth spirits with giant boulders. Leo states that it is the third time he has fixed the mast since they started getting attacked. Leo sends a celestial bronze cannon at the earth spirits and then quickly retreats. Later, when the dwarfs come and attack, they mess up the magic walls in the mess hall and steal the Archimedes sphere from the command console.

The ship takes a beating throughout the final adventure to Greece. When the Argo II makes it to Greece and Percy and Annabeth are discovered by the giants and the gods come down, Leo helps in the fight by launching ballistae into the smaller monsters, but they return fire and severely damage the Argo II. To get back to Camp Half-Blood, Zeus knocks them back to New York and the Argo II can't fly anymore so everyone except Leo gets off. The Argo II is destroyed and its pieces are found scattered across the Camp Half-Blood valley, but to their surprise, Leo used the ship to restore Festus and emerges from the wreckage with him to defeat Gaea.

The ship is a magical trireme with one sail and a few banks of oars. It's 200 feet long (61 meters) with a bronze hull and a flaming dragon head at the top of the mast. The mast head is Festus' head reused. The ship's main weapons are two repeating crossbows that can fire explosive bolts powerful enough to blast through concrete. It has oars that can change into spears if needed and the mast head is able to breath fire. It is unknown exactly how the ship is able to fly, but it is able to stop in mid-air and has a landing gear system so it can dock on dry land. Both Leo Valdez and Jake Mason describe it as "A spankin' hot war machine," though Jake says this as he examines the old blueprint for the ship. The oars are retractable and automated. The controls consist of a keyboard monitor, aviation controls of a leer jet, dubstep soundboard, and Wii remotes and sensor which control different aspects of the ship. The ship's power comes from the engine room on the second and lowest deck, which also houses the sickbay, storage and stables.

The Argo II has cabins for each of the seven and Gleeson Hedge. Annabeth's cabin has a desk with a stack of books, a journal, a pen and a picture of her dad flying a Sopwith Camel biplane, grinning and giving the thumbs-up. Her New York Yankees cap is also hanging from a hook on the wall and a bunk. Other than that the cabin is bare, she likes to keep it clean and simple. Coach Hedge's cabin was described to have looked like a college dorm room after a hurricane. The floor is strewn with laundry, DVDs and dirty dishes scattered around the TV on the dresser.

The mess hall is styled like Camp Half-Blood, which makes Leo feel bad, knowing that Frank Zhang and Hazel Levesque had never gone to Camp Half-Blood. There are also stables for the pegasi, however they are not very useful, as pegasi like to roam around. The lounge has cupboards lined with magic cups and plates from Camp Half-Blood, which fills up with whatever food or drink you want on command. There is also a magical ice chest with canned drinks, which are perfect for picnics ashore. The chairs have cushy recliners with thousand-finger massage, built-in headphones and sword and drink holders. There are no windows, but the walls were enchanted to show real-time footage from Camp Half-Blood- the beach, the forest, the strawberry fields. The large mess hall/lounge is located at the stern.

Sketch done by Rick Riordan himself, used to write The Mark of Athena shows the Argo II.

The ship being attacked by Stymphalian Birds during their quest to Rome.

Part of the Argo II appears on the UK cover of The Mark of Athena.

The Argo II being attacked by Sciron's turtle at sea.

Festus emerging from the Argo II after its destruction. 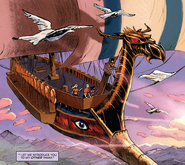 Add a photo to this gallery
Retrieved from "https://riordan.fandom.com/wiki/Argo_II?oldid=580436"
Community content is available under CC-BY-SA unless otherwise noted.