The Argonauts were a band of heroes in Greek Mythology, who in the years before the Trojan War accompanied Jason to Colchis in his quest to find the Golden Fleece. Their name comes from their ship, the Argo, which was named after its builder, Argus.

After leaving Iolcus, the Argonauts first encountered the isle of Lemnos. It's population only consisted of women who neglected worship to Aphrodite and were cursed with stench. Upon their husbands ignoring them, the women killed them all. This resulted in the stench curse being lifted, but no one visited Lemnos because of that massacre. The Argonauts stopped here to load up on supplies but since almost all of them were men they immediately started flirting and getting together with the women and forgot their quest. Jason even had some children with the queen, Hypsipile. Heracles, who already had fame and glory, and Atalanta, the only female Argonaut, were able to make Jason remember the mission. The women weren't sad to see them leave because now they had children.

While sailing into the Hellespont, the Argo ran out of supplies once again. They came across an island with a large mountain shaped like a bear. Cyzicus, king of the local Doliones on the west side, treated them nicely. He warned them about the other side of the mountain but couldn't remember what was on it. The Argonauts left but stopped on the other side since they forgot their supplies. The east side of the island was inhabited by Gegeines, ogres with six arms who wear loincloths. When Jason led some Argonauts for the hunt they encountered no trouble, the Gegeines instead attacked the Argo. Heracles managed to kill most of them so they could leave. The night was so foggy that the Argonauts couldn't see a thing. The only light they saw was from another island which fired missiles. Thinking it was the Gegeines again, the Argonauts fought back in the dark with their weapons. But when the sun came up, the Argonauts found out they slayed the Doliones who thought they were pirates. So the prow of the Argo told them to spend several months building a temple before disembarking.

The coast of Anatolia

In need of fresh water, the Argo anchored off the coast of Anatolia. Heracles, Hylas, and Polyphemus were sent to find it. Handsome Hylas found the water but the river was full of Naiads who fawned over him. They tried to drown him, Polyphemus went to get Heracles and left the Argo. The Argonauts couldn't find the three so they sailed without them. Upon a fight breaking out about leaving them behind, Glaucus, a fisherman who ate herbs and became immortal, told them not to worry. Heracles still had labors to complete, Polyphemus will found the great city of Cius, and Hylas died. With that in mind, the Argonauts continued their quest.

Eventually, they reached the Black Sea. They decided to stop and ask for directions. The island had a king named Amycus, he always made the request of fighting people whose ships docked on his island. The Argonauts had no choice, so Polydeuces, a son of Zeus, offered to fight. He was small and quick which advantages against the big and strong like Amycus. Polydeuces killed the king by elbowing his head to the ground. The locals tried to kill the Argonauts but they fought back. Yet, they didn't have directions. The prow advised them to sail east for two days and find another island.

They did as they were told an encountered Phineas. He was a former king who had the gift of prophecy, he told his people what the gods were planning which enraged Zeus. The god caused the king to become blind and placed him on the island with a buffet of food. However, whenever he would try to eat the food, harpies would swoop down and take the food from him. Phineas agreed to help them if they got rid of the harpies so he can eat. So Jason sent Calais and Zethes, the Boread sons of Boreas to kill. However, during their long chase, the rainbow goddess, Iris, appeared. She agreed to have the harpies not bother Phineas anymore, so the king gave them advice on how to get past the Symplegades, also known as the clashing rocks because they were huge rock cliffs that came together and crushed anything that traveled between them.

Upon reaching the clashing rocks, Jason did as Phineas said. He released one of the recently caught doves to see if it made it through. If it did the Argonauts had row with all their might, if not they were doomed to fail. The dove did made it through, losing only a few tail feathers. Seeing this, they rowed strongly and made it through in a minute with only minor damage at the extreme stern of the ship.

Before the arrival at Colchis

The Argonauts came into all sorts of trouble for weeks. They stopped on the island of Dia where Amazon founder, Otrera, built a temple to Ares. It was now infested by killer feather-throwing birds, the Argonauts barely escaped. Then they accidentally stumbled on the Amazons' territory and got away before the army could catch them. Idmon, a son of Apollo was killed by wild boar when the Argonauts visited King Lycus of the Mariandynians, he was grateful to them for killing Amycus. After losing another crew member to sickness, the Argonauts finally made it to Colchis.

After stealing the Golden Fleece and having Medea join the crew, the Argonauts set sail and escaped the Colchian fleet. Medea summoned fog causing the fleet to split into two. They finally caught up when the Argo approached the west shore of the Black Sea. They attempted to negotiate with her brother, Apsyrtus, during a truce but she killed him. This caused an uproar towards their father, King Aeetes, who followed the parts of Apsyrtus that Medea scattered to help the Argo escape through the Danube River.

Along the way they encountered the River Po, where Phaethon fell from the sky after setting fire to the Earth. His body and the amber crying poplar trees that used to be his sisters were there, the Argonauts quickly agree that Phaethon got off easy. After that, they reached the sea, but because of Medea's act during that truce the Argo kept getting attacked by monsters and storms.

The Sirens' island and Corfu

Then they encountered the island of the Sirens, sea nymphs whom Demeter gave bird bodes to so they can save Persephone from Hades. But they failed and now they lure sailors to their death with their bewitching songs. Orpheus manages to play his harp loud and long enough to drown their music, allowing the Argo pass by them.

After that, they landed at Corfu in western Greece. They almost got captured by Colchian bounty hunters but the queen stepped in to mediate. Since Medea was legally married to Jason, the queen decreed she could not go back to Colchis. After a little wedding, the Argonauts continued the return trip.

The Argo was tossed around the Mediterranean and landed on a island. Despite not knowing where they were, the Argonauts went to load up on supplies. Unfortunately, the place turned out to be Crete. When Jason and some of his crew got the food and water, the Argo was attacked by Talos, a giant automaton Hephaestus made for King Minos. It circled the island's shores three times daily while guarding it and was throwing stones at the ship to protect the island. Medea distracted Talos while the Argonauts removed a nail from his ankle. Molten lead leaked out and Talos was defeated. After years of sailing, the Argo finally returned to Iolcus. 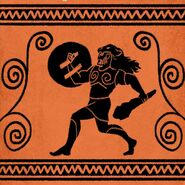 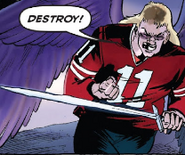