After being called a liar by her classmates, Aru Shah lights the lamp of Bharata to convince them that she isn't. Lighting the lamp releases a monster known as the Sleeper. Once the Sleeper leaves, Aru finds that everyone around her has been frozen in time and that only she can move. She runs to find her mother, only to find that she's been frozen as well. She goes back to the lobby of the museum, where the stone statue of an elephant starts to move and 'speak', a voice booming from inside. The stone elephant's mouth opens, and Boo flies out, revealing himself as the source of the noise. Boo asking where the Pandava brother, only one of Pandava brothers could light the lamp. And when Aru says it was her who lit the lamp, Boo stated they might as well let the world end. She then finds her soul sister and soul father and embarks on an extraordinary journey through Hindu Mythology.

Aru Shah and the Song of Death

Aru Shah hid under a table with Mini when the Night Bazaar was attacked by zombies. When they were found she launched Vajra, which she was having trouble using, at them and chased a thief, another one of her Pandava sisters. Boo saves the two girls after they got surrounded, but when they arrived at the arena, Aru found thief fighting over a bow and arrow with a girl that looked exactly like her. The thief, who turns out to be Brynne Rao, and Aru are accused of stealing the bow and arrow which belongs to Kamadeva. They are allowed to prove their innocence by retrieving Kamadeva's bow and arrow in ten days. So, Aru and Mini, along with Brynne and Aiden (Yes, the boy she accidentally word-vomited on and on whom she most definitely does not have a crush) must journey through the Naga Realm and retrieve the god of love's bow or be banished from the otherworld forever.

Aru Shah and the Tree of Wishes

Fourteen-year-old Aru Shah and her friends are sent on a mission to rescue two "targets," one of whom is about to utter a prophecy that could mean the difference between victory and defeat. Turns out the targets, a pair of twins, are the newest Pandava sisters, though the prophecy says that one sister is not true. When the Pandavas fail to prevent the prophecy from reaching the Sleeper's ears, the heavenly attendants ask them to step aside. Aru believes that the only way to put the shine back on their brand is to find the Kalpavriksha, the wish-granting tree that came out of the Ocean of Milk when it was churned. If she can reach it before the Sleeper, perhaps she can turn everything around with one wish. The plot of the book is that, after a botched rescue mission of Nikita and Sheela Jagan (Reincarnations of Nakula and Sahadeva respectively), Aru,Mini, Brynne and Aiden, as well as Rudy, must find the real Kalpavriksha (a tree that can grant wishes) as according to Sheela's prophecy.

Aru Shah is short-ish, lean and medium-skinned. She has medium to long hair which is usually in a braid 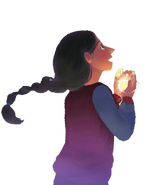 Retrieved from "https://riordan.fandom.com/wiki/Aru_Shah?oldid=578764"
Community content is available under CC-BY-SA unless otherwise noted.