The Son of Neptune
The Mark of Athena
The House of Hades
The Blood of Olympus
The Tyrant's Tomb
Camp Jupiter Classified: A Probatio's Journal

Aurum, along with Argentum, is one of Reyna's automaton guard dogs. Aurum is the golden hound, as Aurum is Latin for gold. Aurum has rubies for eyes. Both of the dogs can sense when someone is lying and will attack you if you are.

While not having a large role in the book, Argentum and Aurum follow Reyna both times she talks to Percy alone. They seem to dislike Percy greatly, growling at him almost the entire time they are in the same room as him. She warns him that they can tell when people don't tell the truth and that they hate liars, she may say this for intimidation, but anyone in the presence may doubt this because of its razor sharp teeth and protective nature to Reyna and extreme loyalty as well.

Aurum and Argentum both appear in the book. They are with Reyna when she talks with Annabeth near the beginning of the book, and when Reyna confronts Annabeth later in the books.

Aurum is summoned along with Argentum while Reyna, Nico, and Coach Hedge are in Pompeii. He detects that Nico is lying when he says he and Thalia Grace are "fine", but Reyna lets it go. When Gaea possesses Coach Hedge and encases summoned ghosts in ash, Aurum joins the fight and even rips off the head off of one. At some point in the fight, Aurum, along with Argentum, disappear. Reyna presumes this may be because they took too much damage to fight anymore.

Reyna summons both dogs again after they arrive in Évora, Portugal. A few days later, Lycaon and his pack of wolves attack the group. Aurum, being made of gold, was ineffective against the attackers. He stood by, frustrated, while Argentum continued fighting. While Nico, Reyna, and Coach Hedge were making their escape, both dogs disappeared again.

Aurum is summoned along with Argentum in San Juan, Puerto Rico. After the fight with Lycaon, even Aurum looked worse for wear. They are placed on guard duty. When Reyna gets worked up over being back in San Juan, Aurum and Argentum pick up on it and begin pacing. After Reyna is knocked out by a dart from the Hunters of Artemis, Aurum and Argentum are deactivated by unknown means, but not dismissed. Reyna, Aurum, and Argentum are taken to the Amazon's secret base, and both dogs are repaired by the Amazons.

In Buford, Georgia, Aurum and Argentum are seen playing with a ball. Nico notes that while they're "frisky and full of energy", it's the opposite of Reyna. Both dogs stop playing and run to Reyna's side when Bryce Lawrence attacks their group. Hedge accidentally steps over a mass grave lined with stones, and multiple skeletons emerge and surround them. When Bryce uses his power over those who break their oaths to control the undead and make them attack Reyna, Aurum and Argentum try to defend her but have their muzzles clamped shut by some of the attackers. When Bryce taunts Reyna, Nico's rage and his powers overwhelmed both dogs, and they "turned in circles, as if their mechanical brains had short-circuited."

He and Argentum nearly attack Claudia, a probatio in the Fourth Cohort, after the legacy of Mercury emerges from a secret passageway in the daughter of Bellona's office. About two weeks later he and Argentum join Reyna in tailing Claudia.

Aurum and Argentum are seen at the praetor house and are fed jellybeans by Meg McCaffrey.

The following day he and Argentum join the quest and happily jump into the bed of their pickup truck. When they arrive the two follow Meg into the foliage. The two stare at Apollo while Reyna laughs at his romantic proposal. The two then catch ravens after they fall out of the sky. The they stand guard over their injured owner when she breaks her leg in a fall and follow her after Lavinia Asimov has a satyr knock her out so she can heal. 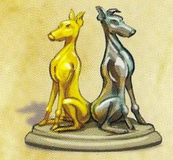 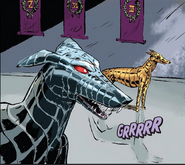