The Unnamed Mother of Bethany Begay is a legacy of Changing Woman, but did not inherit the powers of either Monsterslayer or Born For Water.

She was born into the Navajo tribe with at least one sibling, a brother named Eugene. In their younger years, Eugene would take his trials and failed to complete them, with her having no knowledge of his whereabouts for decades.

In her adult life she married a Navajo man and had at least one child, a daughter named Bethany. Her daughter eventually married and had two children, Nizhoni and Mac Begay. 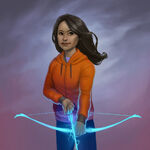 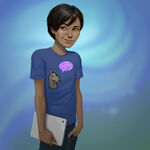 Nizhoni and Mac Begay, her grandchildren

Her granddaughter would see her in a dream at her house. A few days later after when the Bináá' yee aghání are defeated, she greets them and is pleased to see her daughter and learned her brother is nearby. She invites her grandchildren, daughter, son-in-law, Davery Descheny, Spider Woman, and Mr. Yazzie to her house for flatbread.