Training School for the Blood of the Pharaohs

The Red Pyramid
The Throne of Fire
The Serpent's Shadow
The Son of Sobek
The Tower of Nero
The Brooklyn House is the Kane family's mansion, the Twenty-First Nome, and serves as a base of operations and a training school for magicians with the Blood of the Pharaohs to train in the path of the Egyptian gods. It is located in Brooklyn, the Twenty-first Nome. Apparently once inhabited by most of the Kane family, it at one point was inhabited by only Amos Kane, Khufu, and Philip of Macedonia. During the events of The Red Pyramid, it was largely destroyed but was later restored due to the efforts of Sadie and Carter Kane and help from the gods. After Amos leaves for the First Nome, Sadie and Carter make it their home.

Brooklyn House appears in all three books, each time gaining more and more occupants studying the Path of the Gods.

The Son of Sobek

When Carter Kane is alone at Brooklyn House he receives word of a giant crocodile rampaging through Montauk and goes to investigate. Later that night he reminisces on the day’s events.

The mansion can be seen from the window of Rachel Elizabeth Dare’s bedroom in one of her father’s houses. She points it out to Apollo, Meg McCaffrey, Will Solace, and Nico di Angelo, but none of them see it. She also mentions that she sees penguins on the roof, a reference to Felix and his penguins

The mansion is five stories high and is magically hidden on top of an abandoned warehouse. It is built from enormous limestone blocks and steel-framed windows with hieroglyphs around them. There are stairs up to the entrance from the dock on the east side of the East River. The entrance is a block of wood with no handles or knobs and can only be opened by magic. It cannot be seen by regular mortals and magical barriers keep pests, gods, and monsters out.

The Great Room's cedar ceiling climbs four stories high and is held up by stone pillars with hieroglyphs engraved upon them. Three of these stories contain balconies looking out onto the Great Room. The walls are decorated with a strange assortment of musical instruments and Ancient Egyptian weapons. There is an enormous fireplace (big enough to park a car) with a plasma-screen TV above the mantel; it is flanked by two leather sofas. There is a giant snake-skin rug on the ground. In the center of the Great Room is a black marble statue of Thoth. Since the arrival of the younger initiates, the Great Room has often been a mess, and magical cleaning supplies tend to go around constantly cleaning up the mess from the ankle-biters.

Although the entrance to the library is on the first floor, the library itself is much further down and one must traverse a three-story long flight of stairs to reach it. The library itself seems to be a tribute to the one in Heliopolis in the First Nome, albeit a smaller version. The walls of the library are decorated with pictures of gods, monsters, and people in all different colors. In addition to this, the walls are filled with cubbyholes holding scrolls and at each of the four compass points stands a shabti. These shabti each have the duty of maintaining particular subjects and when asked will fetch any scroll, palette, or other Egyptian artifact and are capable of retrieving translated texts. The ceiling is a deep blue and covered in swirling stars that shape the form of a woman, evoking the goddess Nut. Similarly, the floor is shaped into a man's body to represent Geb.

On the second floor, there is a training room which takes up most of the second floor. It is about the size of a basketball court, which is what they used it for in the evenings. It has a hardwood floor, statues of the gods lining the walls, and a vaulted ceiling with pictures of Ancient Egypt. On the baseline walls, they stuck falcon-headed statues of Ra perpendicular to the floor, ten feet up, and hollowed out their sun-disk crowns so they could use them for basketball hoops. Carter uses the training room for his Magic Problem-Solving 101 class, the trainees call it Whatever Works. His rules to his class are: you can leave once you solve the problem given to you by the instructor (i.e. defeating a clay shabti warrior).

On the third floor is a collection of guest rooms, enough to easily house a hundred people, some of which are adjoined. These rooms are outfitted with a kitchen and a bathroom (often stocked with the user's favorite snacks or toiletries as applies). Each room has a king-sized bed with an Egyptian headrest (to prevent one's ba from leaving during sleep) and a deck. Each room also has a closet that is typically stocked with clothes made from linen, cotton, or other non-animal materials. In the graphic novel, the guest rooms has a queen-sized bed, pillows, a white nightstand on the side with a lamp on it, a staff on display above the bed, two khopesh on display above the displayed staff, a white bench at the foot of the bed, wooden floors, a wooden desk with a gold Ankh, djed and parchment on it, a brazier, a wall portrait of a djed, and a balcony with a Scrying bowl on it.

It unknown what floor the infirmary is on. The infirmary is about the size of the bedrooms. The walls are made out of rough-hewn limestone. Large windows let in the nighttime glow of New York. Cedar cabinets are carefully labeled with medicines, first aid supplies, magical charms, and potions. The room is filled with hospital beds, healing hieroglyphics, enchanted wash cloths, and candles with fire that changes color depending on the patient condition. The only known color is dark orange with the condition being unknown, although it could mean coma since the person they were monitoring was said to be in a coma. Instead of antiseptic, the air smelled of charmed vanilla-scented candles that floated around the room. In one corner stood a fountain with a life-size statue of the lion goddess Sekhmet, patron of healers. The water pouring from Sekhmet's hands is said to cure a cold or the flu instantly and provide most of one's daily vitamins and iron.

Carter's room is on the third floor and adjoins with Sadie's room. He has his own bathroom and a private balcony with balcony doors. His computer, television, and stereo system are completely high tech. He has a king size bed with ivory headrests, and a scrying bowl on his balcony. He has his own kitchenette with Twix, Skittles, and ginger ale. He thinks his room is sweet.

Sadie's room is on the third floor and adjoins with Carter's room. She has a huge bed with ivory headrests and a private balcony over the East River. Her chest of drawers has a built-in fridge with Ribena drinks and chilled chocolates. She has a dock for her iPod, and she has headphones and keeps a tape recorder from London. Her walls are magically soundproofed to play music as loud as she likes, and she has her own bathroom and a walk-in closet with lots of new magic outfits. She thinks her room is posh.

A terrace wraps around the house and has a pool in which Philip lives. A dining room table and chairs are located on the terrace.

Freak the Griffin lives on the roof in a stable that Carter constructed. The Brooklyn House Portal is also located on the roof. It is unknown what floor it is and is merely called "the roof". 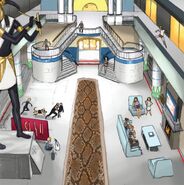 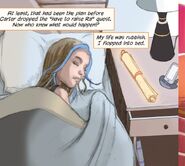 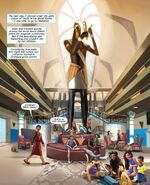