Riordan Wiki
Register
Don't have an account?
Sign In
Advertisement
in: Islands, Magical Locations, The Sea of Monsters places
English

Spa and Resort
School of magic (according to Hylla)

C.C.'s Spa and Resort was a luxurious spa and resort run by the sorceress Circe, the immortal daughter of Hecate. In Greek mythology, it was a place where she lured men onto her island and turned them into pigs. After Annabeth and Percy released the pirates, the pirates burned down and destroyed the spa.

There is white marble and blue water everywhere you look. Terraces climb up the side of the mountain, with swimming pools on every level, connected by waterslides and waterfalls and underwater tubes you could swim through. Fountains sprayed water into air, forming impossible shapes, like flying eagles and galloping horses. There are all kinds of tame animals like a sea turtle napping on a stack of beach towels and a leopard stretched out asleep on a diving board.

In a big room, the whole front wall was windows. The back wall was covered in mirrors, making it look like it went on forever. There is also a bunch of expensive-looking white furniture and in a corner there is a cage on a table. There is also a loom, the size of a big screen TV, which shimmers like it was three dimensional- a waterfall scene that was so real I could see the water moving and clouds drifting across a fabric sky. There is a mirror that shows the person, especially males, what they wanted to look like so they would get a makeover. There is a cage full of guinea pigs. They have a library with the best knowledge in the past three millennia. It was indirectly mentioned that the spa had rooms for Circe and the staff.

Percy Jackson and Annabeth Chase wash up there after the CSS Birmingham is destroyed. Circe transforms all males who arrive at the resort into guinea pigs (she complains about pigs being too smelly). The only known employees are Hylla and Reyna Avila Ramírez-Arellano, (though there were said to be more) who give Annabeth a makeover while Circe speaks with Percy alone.

After Annabeth returns Blackbeard and his pirates to their original form using Hermes' multivitamins, they run rampant throughout the resort. It is unknown what ultimately happens to the spa after they were finished with it, but Reyna said they were forced to leave the island, on which it could be guessed it was in a bad state. Percy and Annabeth escape the spa in Blackbeard's pirate ship, Queen Anne's Revenge.

Reyna tells Percy that they had met once before, but not directly. She was on Circe's island and lived there with her sister, Hylla. She saw Percy and Annabeth arrive on the island during their quest and is still slightly angry about the situation toward him and Annabeth for destroying her home. She eventually made it to Camp Jupiter and in the four years since then, she became Praetor.

Reyna mentions briefly to Annabeth indirectly that she had been one of Circe's attendants on the island during their talk after the Argo II touched down in New Rome.

Although Circe's Island itself isn't in the film, "Circeland," a theme park, is presumably an interpretation of the island. 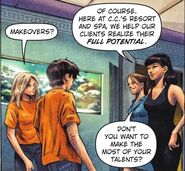