In response to an awful camp orientation video created by the god Apollo, Percy Jackson and other residents of Camp Half-Blood answer such questions as “What is this place?” and “Do I get to keep the T-shirt?” Newbies can check out the section on the Divine Cabins, read up on Magical Landmarks, and consult the chapter of Training Arenas. But Camp Half-Blood Confidential explores much more than just the buildings and grounds. It includes info that can only be learned from those who live there.

For instance, campers do not always co-exist in peace and harmony. The camp is not run with superior efficiency. Prophecies do not flow forth with great regularity. Sprinkled throughout are stories from heroes who have called Camp Half-Blood home or just passed through on their way to places unknown. Chiron himself introduces the book with a brief history of training based on his millennia of experience. And, of course, there are divine words of wisdom from the god Apollo himself, because . . . well, because the demigod authors would prefer not to be struck down, thank you very much.

This entertaining guidebook to Camp Half-Blood is on-sale May 2nd, 2017.

I made you this helpful film.

Trust me. It is awesome.

In this book are a series of sketches from a variety show movie that Apollo written, directed, produced, hosted, and starred in.

First Apollo reads a poem about Chiron on the porch of the Big House. Percy Jackson hoped he didn't bend over since his chiton was too short. In the next scene, Apollo introduces the Lyre choir and sings a song about gold. Then, Apollo, as the god of prophecy, answers questions to people who comes up to him. After that, he runs from campers while they repeat everything he says.

The scene after that one is where Apollo hosts a game show. The contestants are Bea Wise of Athena's Cabin, Arnold Beefcake of Ares' Cabin, and Ferdinand Underwood of the Satyrs. Wise thought this was a bit unfair but Beefcake was enjoying it, Underwood ate his bell and thought he could just say something if he had the right answer. The sketch ends with Apollo saying it's dancing time.

Apollo recites Rachel Elizabeth Dare a prophecy in this book to demonstrate how they're off as confusing.

Pinochle and Ping-Pong, ambrosia squares and nectar,
An attic with an Oracle, a disembodied leopard,
A centaur in a wheelchair, a wine dude, serving time,
This omphalus of Half-Blood will welcome offspring half-divine.

Unraveling of the Prophecy

The Grove of Dodona

The Cave of the Oracle 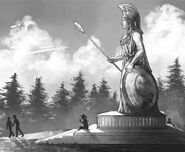