Centaurs have the torso and head of a man, and body of a horse. They are also great healers and archers, like the children of Apollo.

Centaurs are descendants of Centaurus, the child of Ixion and Nephele. Centaurus brought them into existence by mating with the Magnesian Mares.

Centaurs are best known for their fight with the Lapiths - a civilized, Thessalian tribe, caused by their attempt to carry off Hippodamia and the rest of the Lapith women on the day of her marriage to Pirithous, king of the Lapiths and son of Ixion. This fight came to be known as the Centauromachy.

Centaurs were notorious for being overly indulgent drinkers and carousers, given to violence when intoxicated, and generally uncultured delinquents. Each Centaur was also wild and lusty, except for the most well-known centaur, Chiron. True centaurs were born of sun and raincloud, until the female centaurs (called Centaurides) came from some normal horses, and centaurs started out like normal creatures, from conceived from baby to adult. Chiron was another exception. He was born from Kronos and the nymph Philyra. He was half-horse because Kronos was half-horse when he was with Philyra.

Another tribe of Centaurs were seen in Peloponnese where they came into conflict with Heracles  over the wine of their brother Pholos (who had given Heracles some hospitality while he was looking for the Erymanthian Boar). Most of the enemy Centaurs were slain by Heracles who used the arrows covered in the blood of the Hydra on them. The surviving Centaurs fled to the Malean Peninsula southern Lakonia where they were given refuge by Poseidon.

There was also another type of Centaurs called the Cyprian Centaurs. They are bull-horned centaurs who were the result of Zeus accidentally impregnating Gaea during his failed attempt to seduce Aphrodite. They are more friendly than the Centaurs that Heracles encounters.

One known centaur is Chiron, the activities director at Camp Half-Blood, who appears throughout the rest of the series. In the train to Denver, Percy sees a family of centaurs hunting next to the train. A little boy centaur smiles and waves at him.

When Percy Jackson fights Luke Castellan, the centaur organization, the Party Ponies (Florida Chapter) make an appearance. They fight Luke's army on the Princess Andromeda, and help Percy, Annabeth, Grover Underwood, Tyson and Clarisse La Rue to escape the ship. The party ponies later take the demigods back to Camp Half-Blood, with Chiron.

At least one centaur is known to have been defeated by a Giant under orders from Antaeus.

The Party Ponies, commanded by Chiron, assist the demigods in the Battle of Manhattan, though Percy sees no other centaurs other than Chiron at the end of the battle. He deduces that the rest were either killed or ran away.

The army of monsters that attack Camp Jupiter have another breed of centaurs who seem to enjoy killing demigods. These centaurs appear to be a different breed from the Party Ponies where their horse halves being palomino and horns sticking out of their heads (similar to the Cyprian Centaurs). They are all either killed or manage to flee the battle.

When the Argo II is attacked by the Skolopendra, Leo Valdez, Hazel Levesque, and Frank Zhang fall into the water unconscious. They are saved by Ichthyocentaurs, which are half brothers to centaurs.

During the last battle between the Greek and Roman demigods, and monsters, some Cyprian Centaurs appeared in the monster army. Those were distant relatives of Chiron and the Party Ponies, but much wilder and serve Gaea. Later, Chiron also appears in the battle with all of the greek demigods. 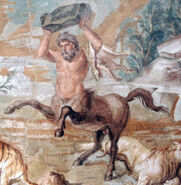 Depicted on pot
Add a photo to this gallery

Retrieved from "https://riordan.fandom.com/wiki/Centaur?oldid=569014"
Community content is available under CC-BY-SA unless otherwise noted.