Charles "Charlie" Beckendorf was a Greek demigod son of Hephaestus. He was the head counselor of Cabin 9 at Camp Half-Blood and the boyfriend of Silena Beauregard before his death, which occurred when the Princess Andromeda blew up during a mission with Percy Jackson, shortly before the Battle of Manhattan. Beckendorf sacrificed himself in the ensuing explosion which delayed Kronos' forces and allowed Percy to escape. He was succeeded by Jake Mason, and later, Leo Valdez.

Percy introduces the readers to Beckendorf as a tall, burly, African-American boy. Beckendorf seems to be the only nice person at camp to Tyson, even though he is a Cyclops. Percy speculates that this is because Cyclopes work for Hephaestus in his forges. Beckendorf takes Tyson to the camp armory and teaches him metalworking. He also gives Tyson a pile of scraps which Tyson later uses to craft Percy's watch shield.

At the end of the book, in the chariot race, Beckendorf fights for Hephaestus' Cabin chariot. He is defeated by Percy when the latter threw back Beckendorf's own Greek Fire.

Beckendorf participates in the Capture the Flag game between Camp Half-Blood and the Hunters of Artemis, on the side of Camp Half-Blood, with Silena. As the head of the Hephaestus' Cabin, it becomes compulsory for Beckendorf to attend the Camp meeting to determine who would go forth and rescue the goddess Artemis. He suggests that the quest members avoid any deserts, as per one of the prophecies lines: "And one shall be lost in the land without rain."

Percy and Tyson visit Beckendorf at the forges. Tyson impresses Beckendorf with his crafting ability by showing what he has learned and how to make magic weapons. Beckendorf and Silena are paired for the camp game by Quintus, which Beckendorf looks pretty happy about.

At the end of the book, Beckendorf takes part in the battle at Camp Half-Blood, and helps to set up several traps for Kronos' army so that they can't get onto the main trail from the woods and destroy camp.

At the beginning of a game of Capture the Flag, Beckendorf tells Percy that Annabeth likes him and advises Percy to invite her to the fireworks. Beckendorf is captured by the Myrmekes during the game and dragged to the Ant Hill. He is rescued by Percy Jackson, Silena Beauregard, Annabeth Chase, and the Festus. Later, the Festus goes haywire. Together, they fight the dragon and stop its rampage.

At the end of the story, Beckendorf gets the courage to ask Silena out to the fireworks. Eventually, he and Percy find out that the whole thing was just a decoy. They are then rounded up by Annabeth's team. Before she leaves, Annabeth asks Percy out to the fireworks which Percy tries to confirm with Beckendorf. Understandably disgusted at their disgraceful behavior, Beckendorf states he'd rather have a haywire dragon when it comes to girls.

Beckendorf is sent with Blackjack the Pegasus to meet Percy and launch a covert attack on the Princess Andromeda with him. At that time, Percy is hanging out with Rachel Elizabeth Dare. When he is driving her around in Paul Blofis' car, Beckendorf interrupts the two by crash-landing Blackjack on the car's hood. He explains the mission - to destroy Kronos' ship - to Percy, who reluctantly agrees to come. Before going on the mission, Beckendorf looks at a photo of his girlfriend, Silena.

The two demigods land on the ship, apparently unnoticed. They stealthily creep into the control room, where Beckendorf plants the bombs. Meanwhile, Percy distracts Kronos' soldiers and even engages Kronos temporarily on the boat's deck. Unfortunately, Beckendorf is captured and brought to the Titan Lord. He reveals that there is a spy at Camp Half Blood, who shared intelligence with him about the covert mission. Beckendorf signals to Percy to get off the ship and jump into the sea. Then he detonates the bombs using a disguised watch. The bombs explode, resulting in Beckendorf's death.

Beckendorf's ghost makes it to Elysium. He talks to Nico di Angelo, wanting him to tell Percy that he does not blame him for his death. Nico also tells Percy that Beckendorf waits for someone. As a result of Beckendorf's brave sacrifice, the Princess Andromeda is destroyed.

Ironically, the spy turns out to be Beckendorf's own girlfriend, Silena Beauregard. Silena has a change of mind and decides to fight for the gods. She rallies the Ares campers to fight for Olympus in the Battle of Manhattan. Disguised as Clarisse La Rue, she fights the Lydian Drakon. Despite a brave effort, she is fatally wounded and dies of the drakon's poison in her wounds. She joins Beckendorf in Elysium. This indicates that the person he was waiting for was his girlfriend, Silena.

While Beckendorf does not make an actual appearance, the new head of the Hephaestus' Cabin, Jake Mason, talks about him fondly and offers Leo Valdez his old bunk. When Leo finds out that Beckendorf had died, he asks if Beckendorf died in the bed, but feels only slightly reassured when told that he didn't. It is also learned that his cabin mates believe a curse had been placed on their cabin after his death; anything they tried to make or fix turns into junk. It is stated that when Beckendorf was alive, he reactivated the Festus and it only listened to him. After his death, the dragon goes berserk and attacks the camp, adding to the supposed curse on the cabin. After Leo tames the dragon and returns from the Quest for Hera, he is appointed as the new head of the cabin.

While physically imposing, Beckendorf is described as kind-hearted and hard working. He didn't talk a lot, but when he did, it would always be something important, so people would listen. He was shy, being afraid to ask Silena out to the firework show, until she risked her life to save him in The Demigod Files. Like other children of Hephaestus, Beckendorf enjoys the company of machines and believes that people (especially women) are much more complicated to understand and deal with. It is stated he had numerous good friends. He even having a soft spot for Tyson, a Cyclops, as he was a good worker and Beckendorf's father, Hephaestus, would use Cyclopes in his forges. Beckendorf seemed to be a leader at Camp. Percy said that it was like someone had stolen the anchor for the entire camp when he died. The only time the campfire is known to burn black was right after his death.

Though not mentioned in the series, it is stated in The Ultimate Guide that children of Hephaestus generally have a fear of heights, coming from when Hephaestus was thrown off Olympus by his mother, Hera, or in some cases his father Zeus. This fear doesn't seem to bother Beckendorf as he is able to fly on Blackjack to find Percy Jackson at the beginning of The Last Olympian.

Beckendorf is described as a huge 18-year-old African-American "dude" with a permanent scowl, muscles like a pro ballplayer's, and hands "like catcher's mitts" which were calloused from working in the armory all day. Percy mentions in The Last Olympian, before going to the Princess Andromeda that "Beckendorf made most monsters cry for their mommies".

Beckendorf was a relatively powerful son of Hephaestus as seen by the fact that he was the counselor for Hephaestus's Cabin although he was less powerful than Leo Valdez, his younger half-brother.

In The Demigod Files, it is said that Beckendorf has had a not-so-secret crush on Silena Beauregard , daughter of Aphrodite for years. At the end of the short story, Beckendorf asks Silena to the firework show, which is the most romantic camp event that Camp Half-Blood has to offer. The moment where he finally works up enough courage to ask Silena out may have been planned by Silena with Annabeth Chase's help, but the smiling girls won't confirm this when Percy confronts them about it. During The Last Olympian, they are in a serious relationship. Silena was also the only person who called him "Charlie." This is an ironic (and coincidental) relationship, as their parents are married on Olympus. However, unlike their parents, the two truly love each other.

When he dies, Silena is heartbroken, but she later joins him in Elysium in the Underworld, after she dies in the Battle of Manhattan, fighting the Lydian Drakon.

Although not much is shown in their friendship, it seems they were good friends, since Beckendorf gave Percy some advice on dealing with girls in The Demigod Files, and Percy let Beckendorf ride Blackjack in The Last Olympian. Percy was devastated at Beckendorf's death and blamed himself, though he is later comforted by Nico (who had met with Beckendorf's soul in Elysium), assuring him that Beckendorf doesn't blame Percy for his death.

Unlike most others at Camp Half-Blood, Beckendorf treated Tyson with kindness in The Sea of Monsters (since his father Hephaestus frequently worked with Cyclopes in his forges), and brings him to the armory to teach him metalworking. Beckendorf is happy to see Tyson again in The Battle of the Labyrinth, and is impressed at how skilled a blacksmith the latter had become. Hence, Tyson was, understandably devastated after Beckendorf's death in The Last Olympian.

Beckendorf was held in great esteem by the rest of his cabin, who were devastated by his death in The Last Olympian, and spoke very highly of him to Leo in The Lost Hero. 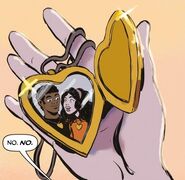 A picture of Beckendorf and his girlfriend Silena Beauregard.