Claiming occurs when a deity acknowledges his/her demigod offspring, usually by sending a hologram of their symbol of power to appear over the particular child's head, but some claims are unique, such as Piper McLean's when her makeup, hair, and clothes are changed to enhance her beauty.

Whenever gods have a child with a human, it was the god's choice to claim that child or not. This was a sign that the demigod child was a son or daughter of a certain god. At Camp Half-Blood, being claimed is considered a great honor and they use this knowledge to sort the demigod in question into the cabin of their godly parent. Before the events of The Last Olympian, not every god had a cabin so a claimed child of a minor god would end up in the Hermes' Cabin.

However, other demigods were never claimed, even after arriving at camp. It is unknown why, but it is mentioned that even the gods lose track of all the children they have with mortals. In The Dark Prophecy, Apollo is unsure if Georgina could be his daughter as he can't remember having any relations with a mortal around the time that she was conceived. It's possible that some demigods aren't claimed to keep them safe, as once a demigod learns who they are, they may begin to attract monsters that wouldn't have noticed them before. At Camp Half-Blood, any unclaimed demigod was also placed in Hermes' Cabin.

Many unclaimed demigods or demigods born from a minor god felt neglected by their parents and by Camp Half-Blood and turned away from the Olympians, eventually leading to the Second Titan War. However, after the war was over, Percy made the gods promise to claim their children by the time they turn thirteen and build cabins for all the minor gods, in accordance with the wishes of Ethan Nakamura and Luke Castellan. From then on, Claiming became a common occurrence at Camp Half-Blood, with new campers normally being claimed at the campfire. Others have been known to claim their children as soon as they arrive at camp. Even after Zeus closed Olympus, at least some of the gods appear to have kept up this practice although it is unknown if they all did.

At Camp Jupiter, the gods don't interact with their children or legacies as much as their Greek aspects do. However, by tradition when a member of the Legion turns sixteen, they are considered a man/woman and are normally claimed on this day. Other times, the gods will send some sign or omen to their child like in the case of Vitellius. Any unclaimed member of the Legion is placed on probatio until they achieve a great feat or are claimed by their parent, although it appears as though this rule is rather loose as Percy remained on probatio even after Juno told the Camp that he was the son of Neptune, and Hazel needed to accomplish a great feat involving the unicorns despite having already been claimed by Pluto months earlier. In the case of Frank Zhang, Mars made a public announcement while he was present declaring a quest. Mars placing Frank in charge of the quest and Gwendolyn's subsequent retirement prompted his promotion from probatio to centurion.

At Hotel Valhalla, a being called a Vala would learn if new Einherjar are demigods by casting rune stones into the air and whichever symbol facing up when the stones landed would be the symbol of the Einherji's godly parent. Though in some rare cases (such as Magnus Chase's), Norns would cast the rune stones.

Hindu Gods claim their children in a ceremony conducted in the Court of the Sky. Gigantic statues of the gods surround the demigods, and arrows attack the demigods after they perform the Pranama. They are required to avoid the arrows until their godly parent decides to intervene and save them.

Children of the Mayan Gods reach their full power when their godly parent claims them the in the presence of the council in the Old World and they accept it. A ceremony is held for the god to officially acknowledge their child.

When Poseidon claims one of his demigod or Cyclops children, a glowing green trident hologram appears over their head. This happens to Percy in The Lightning Thief after he heals his Hellhound wounds when Annabeth, realizing his capabilities, orders him into the creek so that Chiron can view his powers. It later happens to Tyson in The Sea of Monsters after he enters Camp Half-Blood while he stands waiting in the dining pavilion of the Big House as he was being taunted by Tantalus, the substitute activities director for Chiron.

When Aphrodite claims her children they start glowing with a pink aura. After that they instantly look great (beautiful). The children of Aphrodite refer to this as Aphrodite's Blessing, which goes on for a while and can sometimes even go back when Aphrodite wills it to, but may fade after a while. This happened to Piper while she was at the camp's bonfire in The Lost Hero.

When Hephaestus claims his demigod children, a red fiery hammer appears over their head. This happened to Leo instantly after he arrived at camp in The Lost Hero.

When Demeter claims her demigod children, a gold sickle with a few sheathes of wheat appears over their head. This happened to Meg McCaffrey at dinner after she arrived at camp in The Hidden Oracle.

After arriving at Camp Half-Blood, Percy Jackson is placed into Hermes's Cabin with all of the other unclaimed demigods.

During a game of Capture the Flag, after a hellhound attack and the revelation of his water-based powers, Percy is suddenly claimed by Poseidon as his son, causing a great deal of shock and trouble as Percy's parentage breaks the Pact of the Big Three. Chiron identifies Poseidon's timing on the claiming to both be to protect his son due to the theft of Zeus' Master Bolt and his need for Percy to retrieve the Master Bolt for him and to prevent a war between the Twelve Olympians.

Much to the shock of Camp Half-Blood and Percy in particular, the Cyclops Tyson is claimed by Poseidon as his son while the campers are trying to decide where he'll stay.

As part of his reward for his role in the defeat of Kronos, Percy demands that all of the gods get their own cabins at Camp Half-Blood and that they claim their children by the time that they turn thirteen.

Over the rest of the summer, new cabins are built for all of the gods and they begin properly claiming their children. As a result, Hermes's Cabin is a lot more crowded and claiming happens almost every night rather than being a much rarer occurrence.

Almost immediately upon arriving at Camp Half-Blood, Leo Valdez is claimed by Hephaestus although Jason Grace incorrectly identifies him as Vulcan, the god's Roman aspect, hinting at Jason's own Roman heritage.

At the campfire, while discussing the Quest for Hera, Chiron tells everyone that Jason has already been claimed a long time ago and has him demonstrate his powers to reveal his heritage as a son of Jupiter.

Later, while Jason is choosing who will join him on his quest and Drew Tanaka and Piper McLean are arguing, Piper is claimed by Aphrodite.

At Camp Jupiter, Hazel Levesque isn't so much as claimed by Pluto but identified as his daughter by Nico di Angelo when the son of Hades brings his half-sister to Camp Jupiter after resurrecting her. Similarly, Percy Jackson is identified as the son of Neptune by Juno when he arrives at the camp.

When Mars arrives at the camp to assign a quest, he publicly claims Frank Zhang as his son by calling Frank to his side and announcing it to those gathered.

During dinner at Camp Half-Blood, Meg McCaffrey receives a claiming: a golden sickle with a few sheaves of wheat. After seeing the symbol, Damien White mistakenly identifies Meg as a communist before an annoyed camper from Cabin Four corrects Damien that it's the symbol of her mother. Although uneasy with this development due to his history with Meg's mother, Apollo announces that Meg has been claimed by Demeter, something that both Apollo and Chiron had previously suspected due to Meg's strong nature powers. Later, while discussing Meg's parentage with her, Apollo states that her Imperial Gold swords would suggest a Roman parentage and training, making her a good candidate for Camp Jupiter, but she is the daughter of Demeter, not Ceres, her Roman form. When questioned how he knows, Apollo states that along with Meg being claimed at Camp Half-Blood, which is no accident, Demeter is the more powerful of the goddess' two forms and Meg has shown herself to be powerful.

Due to a comment by Trophonius, the residents of the Waystation speculate on whether or not Georgina could be Apollo's daughter. However, the now-mortal god has no memory of anything that could've led to the birth of Georgina, leaving him unable to claim her either way just through acknowledgment even when Georgina and her adopted mothers question him on the possibility.

Claudia is claimed by Cardea. 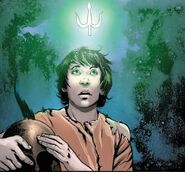 Percy Jackson being claimed by Poseidon

Leo Valdez being claimed by Hephaestus

Piper McLean being claimed by Aphrodite