Cohorts are groups of forty legionnaires who serve the Twelfth Legion. Each cohort is headed by two centurions. Each Cohort has four barracks with ten bunks in each. The Twelfth Legion Fulminata has five cohorts ranked from best to worst, reflecting the ancient Roman cohort structure in terms of quality. They are Camp Jupiter's equivalent of Camp Half-Blood's cabins. The better the camper's letter, the better chance of him or her getting into the better cohorts.

The Cohorts have shady porches, where campers lounge in hammocks or played cards and drank sodas. The buildings were freshly whitewashed. Each dorm had a different collection of banners out front displaying Roman numerals and various animals - eagle, bear, wolf, horse, and something that looked like a hamster.

The First Cohort is considered the best. It is where the campers with the best letters of recommendations go. Octavian and Michael Kahale are the cohort's known centurions.

Considered the second best, legionnaires who are in this cohort get almost as good of a reputation as the First. Larry is one of its centurions.

Considered the average cohort, campers with average letters are placed in this cohort. Hank is one of the cohort's centurions.

Between the average Third and the worst Fifth, the Fourth's mascot is a wolf. Leila is a centurion of this cohort.

The worst in the legion, campers with the worst or no letters of recommendation are put in this cohort. Members of this cohort are Dakota, Gwendolyn, Percy, Frank, Hazel, Bobby, Michael Varus, Bryce Lawrence, Lavinia and Jason. Jason, Dakota, Gwen, Hazel, Lavinia and Frank are the cohort's known centurions, Lavinia being the current one . Even though it is considered the worst, the majority of known praetors have come from this cohort. It has also housed four of the seven demigods in the Second Great Prophecy. 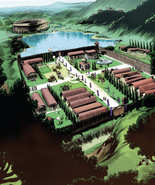