Combat magic is a form of magic which consists of summoning weapons like swords and summoning magical shells of armor around the body.

This is the easier form of combat magic, where the magician can simply summon a weapon by drawing the appropriate hieroglyph or speaking the Divine Word. Then, the spell transports the weapon from the Duat, the magical realm, to the mortal world. This is usually not used since it takes less energy to summon a weapon, that is stored in the Duat beforehand, than to creating a new one altogether in the Duat. Weapons can also be created in the Duat by combining different types of metals and elements.

This is the harder form of Combat Magic. The main use of it is to summon a combat avatar, a giant holographic shell which surrounds the caster, mimicking his/her movements. It requires a large amount of magic to summon a combat avatar and can only be used for a short amount of time. Carter mentions that it is akin to sprinting at full speed, something which you cannot keep uniform for a long time.

If a magician summons a combat avatar without the power of the god, then it assumes the shape of the character of the magician's imagination. However, when a magician uses a gods power to create a combat avatar, it takes the shape of the gods ancient animal-headed form. Godly avatars are also much stronger than normal avatars and can be maintained for longer periods of time, although it is more risky when hosting a god.

Horus' battle avatar has inhuman combat skills, Bast's has claws and therefore does not actually require a weapon for better offense and Set's allows storm magic to be used while using an avatar. Since Duat is the magical realm underneath the mortal world, magic is stronger there and can be channeled more easily. Therefore, combat avatars do not stay as holographic shells and become flesh-and-blood fifteen-feet-tall warriors. Hence, all of the attacks dealt by the battle avatar are multiplied many fold since the hits are now completely solid. 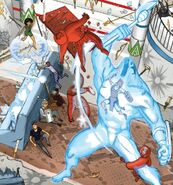 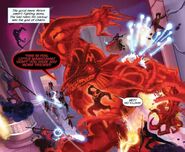