The cornucopia (also known as horn of plenty) is a symbol of abundance and nourishment, commonly a large horn-shaped container overflowing with produce, flowers, nuts, other edibles, or wealth in some form.

The cornucopia was created when Hercules wrestled with the river god Achelous and wrenched off one of his horns (river gods were sometimes depicted as having horns).

The cornucopia became the attribute of several Greek and Roman deities, particularly those associated with the harvest, prosperity, or spiritual abundance, such as personifications of Earth; the nymph Maia, and Fortuna, the goddess of luck, who had the power to grant prosperity.

Jason Grace and Piper McLean are sent on a quest by Hercules to retrieve Achelous' other horn to humiliate him even further, since Hercules had cut off his first one. When Jason and Piper get to his river, Achelous is singing. Piper thinks that the singing has the same effects as charmspeaking. Achelous assumes that the demigods are there to kill him at the request of Hercules. He explains to them why Hercules did not deserve his horn, and tells them the story of Deianira. Although both Piper and Jason feel bad for Achelous, who seems to be friendly, the god tries to stop them by drowning them. While Jason is pulled under, Piper tries to bargain with Achelous, but the god believes that she wants to be his bride, to compensate for Deianira. When Achelous picks her up, she threatens him  with her knife to let Jason go. Piper then cuts off the god's horn and leaps for the shore, using Jason's power over the winds to carry her safely to the bank. Achelous wails as he sinks back into the river to mourn his horn.

Hercules never gets Achelous' horn, because Piper forces him to give them permission for their ship to leave. Piper uses the horn as a cornucopia at Hercules, and food comes pouring out of it, burying the god. The Argo II flees from Hercules' island, leaving behind a mourning Achelous and an angry Hercules. Piper then uses it when she, Jason Grace, and Percy Jackson are drowning in the well, and then again when they are battling the giants. She ties a string to it and wears it like she would a purse. It is used in later books as one of Piper's weapons.

While fighting Mimas in the Temple of Fear, Piper McLean offers the cornucopia as a sacrifice to her half-brothers: Phobos and Deimos. She uses it to slice off the head of the statue of Ares, releasing the makhai within. 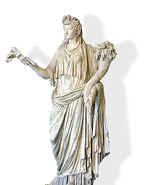 Add a photo to this gallery
Retrieved from "https://riordan.fandom.com/wiki/Cornucopia?oldid=536176"
Community content is available under CC-BY-SA unless otherwise noted.