The Egyptian Queen is a boat belonging to the Kane family. It may only be summoned once a year. The boat was formerly captained by a demon, Bloodstained Blade, who betrayed the Kanes after Setne freed it. Orbs of multi-colored fire flit around the decks, performing all the duties required of a crew.

The boat is first summoned by Ruby and Julius Kane, on the night that they freed Bast from her prison, which was also the night that Ruby died. Sadie Kane says that she can imagine her father on the boat, mourning for his wife with only a cat goddess and a blade-headed demon to keep him company.

Thoth summons the boat for the Kanes to take them to the Underworld to meet with Anubis and try to get a Feather of Truth from him. Bast, who is already on the boat, warns about giving the Captain clear instructions and explains how the boat is where she made her deal with Julius Kane after he and his wife freed her at the expense of Ruby's life. Bast also explains the truth about her imprisonment. After encountering a few obstacles along the way, the boat reaches the Underworld and drops off the group.

Needing a way to the Underworld, Carter reluctantly summons the Egyptian Queen again and picks up Sadie and Zia along the way. Needing a ride this time after they leave the Underworld, Carter has the boat wait for them and then has it transport him, Zia, and Setne to Memphis to find the Book of Thoth so they could find the location of Apophis' sheut and how to destroy it. They come under attack from a monster hippo, but is saved when Carter summons Hapi. However, the boat is badly damaged. Hapi transports the boat to where it needs to go and when the group returns with the Book, repairs have been made, but Setne orders the boat to the Land of Demons. Zia kills the Captain with fire when he is attacking Carter, but the boat crashes in the Land of Demons and is destroyed.

It has multiple decks with ornate, black and green railings. It has paddle wheels on the side. The name of the boat is written in gold paint on the paddlewheels' housings; it is written in English, Demotic, and hieroglyphics. It has the general appearance of a cruise liner or casino boat. The boat's stacks billows out glittery smoke, as if it were running off of gold. The stern has two eyes painted on it; they both move and scan for danger. Inside, it has a very large dining hall that provides a great variety of food from all over the world. 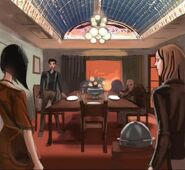 The Dining room on the boat as seen in the graphic novels.