Elemental Magic is one of the paths a magician can follow. A magician with this particular speciality is known as an Elementalist. An Elementalist has the ability to control a specific element; usually according to his or her choice of God or Goddess. Elementalists are generally skilled magicians, for it requires a lot of prowess to direct a path of a god into an element. However, magicians in training to become an Elementalist do not need to focus on just one element, nor are the only able to choose one specific element. Magicians may choose others or all the elements to control, even if they specify in a specific area. Thoth's elemental shabti in The Red Pyramid that he tested Carter and Sadie with made a wave of water come from the ground, he made rocks fly at her, and he began to summon fire before Sadie finally destroyed him.

Types of Elements mentioned in the Kane Chronicles

Storm magicians are elementalists that specialize in the chaotic elements which include lightning, sandstorms, storm clouds, tornadoes/hurricanes, and other kinds of storms. Storm magicians aren't valued, however, due to this magic being chaotic. Amos Kane is the only protagonist in the series shown to use storm magic initially due to being possessed by Set but later learned to do it on his own by channeling the Path of Set. 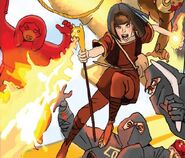 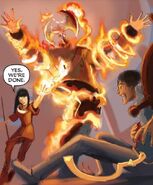