The Eye of Horus (a.k.a. wedjat/udjat) is a rune which was often painted on boats in Egypt to act as a protection glyph. Today, it is still used in places like Egypt and Greece for protection.

In The Red Pyramid, Thoth, the god of wisdom, says he himself created the symbol. Horus was in battle with Set, and his eye was injured. Using magic, Thoth restored it, providing a new symbol for Horus. Horus has a gold eye, and a silver eye; one is the restored eye, but it is unknown which is which.

It is hinted that it is the silver one, because Thoth said he made it out of moonlight.

Because Carter hosted Horus, he could easily summon this symbol. Though he no longer hosts this god, part of Horus' magic is still is in Carter. This symbol helps other creatures identify Horus. For example, when Carter summoned this symbol, the griffin understood what is meant, and acted as if it was Carter's servant, though griffins are servants of Horus. This would help other beings also know if the person is hosting or had hosted Horus.

This was painted on boats in ancient times. It was considered to be helpful, used for protection. The eye would keep a look out for danger; in the series, the eye on the Egyptian Queen moves, possibly scanning for threats. 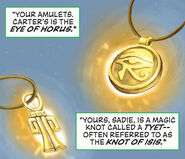 Retrieved from "https://riordan.fandom.com/wiki/Eye_of_Horus?oldid=518503"
Community content is available under CC-BY-SA unless otherwise noted.