Geokinesis is the mental and/or physical ability to control/manipulate earth. Abilities can include earthquakes, fissures, rock slides, landslides, volcanic eruptions, or the ability to cause rocks to shoot up from the ground.

The user of this ability is able to mentally and/or physically control earth. User can create, shape and manipulate earth and earthen elements including most solid objects, specifically all minerals and mineral compositions regardless of their state (mountain, boulder, sand or dust), dirt, soil, etc. With this ability, one could hurl rock, dirt or minerals at foes with only the power of their minds, create fissures, sinkholes, mudslides or form said rock, mud, and soil into constructs, like walls or projectiles. Powerful users may also be capable of even creating massive earthquakes, control every kind of metal or more even rarer: turn soil/rocks into lava. Although not seen, it's possibly possessed by the demigod child of Demeter and her Roman counterpart, Ceres. This ability can also be possessed by powerful children of Hades and his Roman counterpart Pluto.

Skeleton Warriors manage to breach the borders of the camp and attack Percy Jackson. Nico di Angelo, still upset over his sister's death opens up the ground and sends the warriors into the Underworld before the fissure closes back up.

Nico creates large truck-size columns of Erebos|black rock between Percy, Annabeth Chase, Rachel Elizabeth Dare, and himself to help the others escape Kronos' palace on Mount Othrys. Nico has also been shown levitating rocks and creating and vanishing structures of rock.

While traveling up Mount Diablo, Leo Valdez, Piper McLean, and Jason Grace are constantly being pulled into the ground as it forms around their feet like quicksand because of Gaea. Gaea herself also takes physical form by manipulating the earth itself to take the shape of a face or a woman wrapped in a cloak.

Hazel Levesque uses her powers to collapse old trenches in the ground to clear a path to the fortress during the Roman War Games.

Hazel and Tarquin both use this ability in fights. 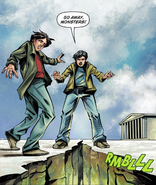