A ghost is a soul, spirit or deceased individual that resides in the land of the living, which is believed to appear or become manifest to the living, typically as a nebulous image.

Nico di Angelo spends most of the book trying to bring his sister back from the dead. When he finally succeeds in summoning her ghost she does not wish to return to life. Later it is revealed that the son of Hades was being manipulated by Minos, who wants him to get revenge on Daedalus but when he realizes this he exiles the king’s ghost to the underworld.

When Nico is trying to find his mother‘s ghost, Bianca arrives to persuade her brother not to do so, but he ignores her warnings.

Hazel was formerly a ghost in the Fields of Asphodel until she was rescued by Nico Di Angelo. Marie Levesque also became a ghost after her death and was sent to Asphodel as well.

Beryl Grace's ghost appears as a mania to try and convince Jason to join her and Gaea's forces, saying that Zeus neglected her and caused him a lot of misery. However, with the help of Piper's charmspeak, Jason refused, saying that it was her who dumped her and that he was fighting for the Olympians. Beryl Grace's mania ghost then disappears.

After Kim Min is saved from pirates and brought on board the Pale Lightning, she meets Bae Jang, the ghost of a cadet who died saving her and, with his permission, takes his place.

Later on the Fourth Colony, the ghost of Kim Jun, Lieutenant Seo-Hyeon, and Eui are seen. Mim and her comrades use the Dragon Pearl to create a tomb for the restless ghosts of the Fourth Colony. Soon after the ghost of those Captain Hwan sent to their deaths, minus Jun, surround the captain and drag him into a nearby forest.

Pahua and the Soul Stealer

Template:Pahua and the Soul Stealer Canon Pahua Moua is able to see ghosts. 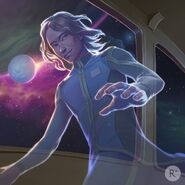 Template:Pahua and the Soul Stealer