Ha-di is an Egyptian Divine Word that means "Destroy".[1] This spell causes the target to explode. It is primarily used to break and shatter objects, and often creates explosions. This spell has been used by Sadie Kane and Sarah Jacobi.

The hieroglyph can be divided into three phonograms, or "sound pictures". The mace is hed, had, hid, hod, or hud or hwd. The second is a confirmation or support of the first - d. The third is ah, ai, or ii - So the word is H?d-d-ai/a/ii.

Sadie uses this spell to break into the library at the Brooklyn House.

After she gave up the power of Isis, she struggled with the spell, but regained the spell by the end of the book.

The Staff of Serapis

Sadie used the spell, but it proved useless against Serapis who simply crushed the hieroglyph to her astonishment. This was because Serapis had both Greek and Egyptian magic and controlled, consumed and replaced both. 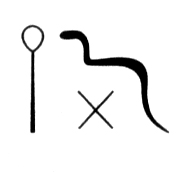 Retrieved from "https://riordan.fandom.com/wiki/Ha-di?oldid=518073"
Community content is available under CC-BY-SA unless otherwise noted.