Home of Hades and Persephone

Hades' Palace is located in the Underworld and is the home of Hades, the God of the Underworld, and his wife Persephone, his Queen and Goddess of Springtime.

The enormous palace was modeled after Olympus, as Hades isn't welcomed there except on the Winter Solstice. It is made of glittering black obsidian, with a black marble portico, and the entry hall had a polished bronze floor. The palace is run by skeleton servants and guarded by the skeletons of dead soldiers from different wars that have been around the world, such as The Second World War.

In front of the palace is Persephone's Garden, which has been said to be one of the most beautiful gardens on Earth. A dark veranda overlooks the garden with a silver throne, a table, and a shadow fountain in the corner. A pair of thrones, one bone and one silver, sat on the balcony with a view of the Fields of Asphodel. A breakfast table with flower arrangements also sits on the balcony.

A person can only reach the palace if Hades wishes them to. If he doesn't, the person will just keep walking for eternity without ever reaching it.

Percy, Annabeth Chase, and Grover Underwood visit to diplomatically ask Hades to give them Zeus' stolen Master Bolt. Hades is found sitting on his throne, facing away from the three heroes. They later make a hasty retreat using Poseidon's Pearls.

The Sword of Hades

Thalia Grace, Nico di Angelo, and Percy are summoned to the palace by Persephone to retrieve Hades's Sword which was stolen by Ethan Nakamura. They are first summoned to Persephone's Garden then they are brought to a veranda overlooking the garden. After retrieving the sword, the group return to the palace to return the sword to Hades and Persephone. Percy and Nico talk on a balcony overlooking the Fields of Asphodel where Nico reminds Percy of his idea to make Percy immortal by bathing in the River Styx. Percy promises to think about it. Thalia and Percy say goodbye to Nico, whom chooses to remain in the Underworld to advise Hades in the coming Titan War.

When Percy went to the Underworld with Nico to bathe in the River Styx, Nico revealed that he had tricked Percy to come with him, in order to get information from Hades about Nico's past and his mother. He hands Percy over to the Furies, who take Percy to Hades palace. Hades talks with him for awhile then sends him to the dungeon, a place below the palace. The dungeon is guarded by ghostly warriors and other dead beings. Percy is held there for a short time until Nico shows up to rescue him. They escape from the dungeon, and make their way to the River Styx so that Percy can bathe in it and gain the Curse of Achilles. 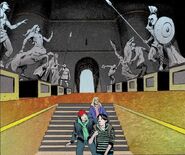