Underworld
Olympus (since The Last Olympian)

Green (Son of Magic)
Black (The House of Hades)

Black (Son of Magic)
Blonde (The House of Hades)

Hecate is the Greek goddess of magic, the Mist, crossroads, necromancy, the night and the moon. She is a Titaness of the third generation, daughter of Asteria and Perses, and serves the goddess Persephone as her attendant and minister. Her Roman counterpart is Trivia.

Hecate is a third-generation Titaness born to Perses and Asteria, daughter of Koios and Phoebe. She is often accompanied by a black Labrador retriever and a polecat, which used to be her enemies before she morphed them into animals.

Hecate decided to side with the Olympians during the First Titanomachy, which allowed her to retain her duties after the Titans were defeated.

When Persephone was abducted by Hades, Hecate was in a nearby cave and overheard the former's screams. She immediately rushed to help, but upon arrival, Persephone was already taken to the Underworld. Hecate sensed that someone was abducted, but couldn't identify who it was or the kidnapper, as her magic was weak during the day. Unsure of what to do next, she decided to go back into her cave and wait until nightfall to gather more information through her spells. However, both Zeus and Hades were covering up the abduction with stronger magic, preventing Hecate from learning more about it.

After ten days of searching, Hecate found Demeter calling for Persephone in the area around her cave. She immediately pieced together what had happened and met with Demeter, sharing her belief that Persephone had been abducted by a powerful god, which made Demeter even more distraught. Feeling sympathetic, Hecate offered to help by using her torches to light the goddess' journey through the night. During the day, Hecate returned to her cave to rest, promising to help Demeter again after nightfall.

Eventually, Persephone was reunited with her mother. As a reward for helping Demeter during her search, Hecate was given a place in the Underworld as an attendant to Persephone, which made her more than happy as the darkness of the Underworld made it a better place for working magic than a drafty cave.

During the First Giant War, Hecate was opposed by the giant Clytius. She defeated the giant by setting him alight with her torches.

Hecate is mentioned to be the mother of Circe.

Dionysus mentions that she has gone over to Kronos' side, tired of not receiving enough respect as a minor goddess. She sends two of her empousai (Kelli and Tammi) to attack Percy Jackson.

It is mentioned that Hecate uses her magic to help Morpheus cast a huge sleeping spell over New York City, causing all of the mortals in Manhattan or near the area to fall asleep. She later sends magical lights towards Olympus, which are quickly repelled by the wards of Olympus and Aeolus' wind minions.

At the end of the book, Hecate's Cabin at Camp Half-Blood is under construction, along with those of many other minor gods. Her cabin is made of magical stones that, if dropped, would either explode or turn everyone within a half-mile radius into a tree.

Hecate is mentioned as being the mother of Lou Ellen Blackstone, the head counselor of the Hecate Cabin.

Hecate makes her first appearance and tells her most powerful son, Alabaster C. Torrington, that she was forced to rejoin the Olympians to keep them from killing her rebel children, as she already lost more children in the Second Titan War than any other god.

However, when her daughter Lamia comes to kill Alabaster, Hecate steps in and saves them from each other's magic. She decides to restore Alabaster's companion, Dr. Howard Claymore, in Mistform, so that he may watch over her son while he is in exile.

Hecate made Hazel Levesque choose her path in the three gates in the Mist. It is revealed that she helped Marie find the spell that resulted in Hazel's birth. Hecate promised to obscure the progress of the Seven but said that Hazel needed to learn to manipulate the Mist. At the climax, Hecate fights by Hazel's side against the Giant Clytius. Together, they defeat the bane of magic.

During the Seven Heroes of Olympus' final battle with the giants in Athens, Hecate fought alongside Hazel.  After the battle, Nike tried to put a golden laurel wreath on Hecate's head but she swats it away.

Hecate is a lover of solitude and expects people to make their own choices. According to Clytius, she sends acolytes to do her bidding and take all the risk and offers vague promises of magic.

Despite her many years of faithful service, Hecate resents the Olympians for being treated as a minor goddess, which leads her to support Kronos in the Second Titan War. Since her children have been given their place at Camp Half-Blood, she has given up her grudge against Olympus but becomes protective and worrisome of her children, many of whom were lost, captured, or embittered in the war.

Hermes describes her as insufferable, but this was siding with Kronos during the Second Titan War so it could have been nerves or resentment fueling his statement.

According to Rick Riordan's website, "Hecate is usually dressed in dark robes, holding twin torches (all the better to see you and burn you with, my dear). She is accompanied by a she-dog and a polecat. In later times, Hecate was pictured as a woman with three heads, or three entirely different forms for the morning, noon, and night."

In The Demigod Diaries, Hecate had green eyes and black hair that barely came down to her shoulders, like her son Alabaster. Her face was like a Greek statue — pale, beautiful, and ageless. She was surrounded by green light. Hecate dressed in white robes with ornate silver designs, like runes or alchemy symbols.

In The House of Hades, Hecate was described as "beautiful, but deathly pale" with black eyes. Her blond hair was set in an Ancient Greek style high-set ponytail. Her dark, sleeveless gown seemed to ripple as if the cloth was ink spilling off and wore sandals. She carried two old-fashioned reed torches.

The different descriptions in the novels can be explained that as, a goddess, Hecate can change her appearance at will. Furthermore, Hecate is considered to be the triple-faced goddess, having three separate appearances and personalities.

Hecate can change into her Roman counterpart of Trivia. As Trivia, she becomes more disciplined, militaristic, and warlike. While Greeks envisioned her as a powerful and mysterious being, for the Romans she was the "Queen of Ghosts" because of her role of guarding the borders between the human world and the realm of the dead.

Despite this, Hecate claimed that she had no Roman aspect, that she was always Hecate. However, this could be because she is not affected by the Greek/Roman split. The goddess Trivia is sometimes viewed as a separate deity, patron of travelers, and crossroads.

Hecate possesses the standard powers of a Titaness and goddess.

Her name means "will" but at the same time, but her name's spelling and pronunciation mean "operates from afar", "removes" or "drives of", "the far-reaching one" or "the far-darter". 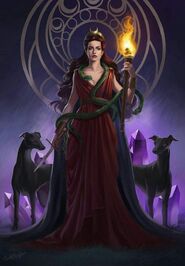