Hellhounds are massive, dog-like Monsters from the Underworld.

Hellhounds are children of the goddess Nyx and Cerberus, the guard dog of the Underworld. They are feared by demigods save for children of Hades and other chthonic deities.

​​​​​​Percy Jackson and the Olympians

Just after Percy's first capture the flag game, he is attacked and almost killed by a hellhound, which is defeated by arrows fired by Chiron. It is later revealed that Luke Castellan, who was working for Kronos at the time, had summoned it since no monster can enter within the camp's borders unless given permission.

Two hellhounds were seen on the Princess Andromeda.

The main hellhound that appears is Mrs. O'Leary, the only friendly hellhound. She was probably trained by Quintus, because she is very loyal to him and is very sad when he dies. Her bark is said to be "slightly louder than an artillery gun." Quintus claims that he and Mrs. O'Leary became friends through "many close calls with death and quite a few giant chew toys".

Through the Mist, Mrs. O'Leary was seen as a poodle.

Mrs. O'Leary appears when Percy shadow travels for the first time after Nico teaches him how to do it. During the final battle, numerous hellhounds are a part of Kronos' army. They mainly shadow travel behind the demigods' lines.

Ek and Do are two hellhounds who guard the Kingdom of Death.

Two hellhounds appear next to Ixtab when she arrives at the Old World, one of them is Rosie after she was killed by a Demon Runner.

Hellhounds are usually described as being large, black mastiffs with glowing red eyes. The average size of hellhounds are about the size of a grizzly bear or a rhino, but can be as tall and large as a garbage truck (e.g. Mrs. O'Leary).

In the film, Percy does not encounter a hellhound in the forest, but is instead visited by Hades at the bonfire. Later in the Underworld when they enter his palace, they are 'greeted' by angry hellhounds, but Persephone scolds them and they leave. She tells the demigods that the hellhounds sense the presence of another animal, indicating Grover, a satyr. In the film, they resemble gargoyles, having a grayish lion like face and fur. 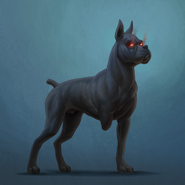 Rosie as a Hellhound
Polski Русский
Community content is available under CC-BY-SA unless otherwise noted.
Advertisement