Hephaestus' cabin (#9) is for the children of Hephaestus, the god of blacksmiths and fire.

The cabin is made of brick and has a smokestack sticking out of it, like a tiny factory or an oversized motor-home.

The entrance is like a vault door, circular, and of thick metal. It opens with a lot of gears turning and smoke hissing. It has shiny metal walls and metal slatted doors. It is noted for being unclean and messy, filled with junk and machines often.  There is a tunnel underneath it. There are only three Hephaestus demigods at the end of the war with the Titans because of Charles Beckendorf's death. In The Lost Hero, their numbers have risen to about a dozen boys and girls, although none of them look alike.

The steel bunks are folded against the wall and have a digital control panel, blinking LED lights, glowing gems, and interlocking gears. A fire pole comes down from the second floor even though the cabin doesn't appear to have a second floor from the outside. A circular staircase leads down to the basement, power tools, an assortment of weapons, a workbench and a lot of scrap metal. In the graphic novel, the bunks are against the wall and have curtains. Leo's bunk, Beckendorf's old bunk, has a built-in game station at the footboard, a stereo system in the headboard, a glass door refrigerator at the base, and a whole bunch of control panels running down the sides. The beds retract to a private room in the basement. 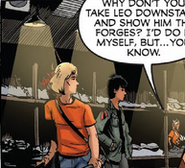 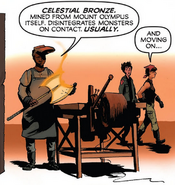 Map of Camp Half-Blood
Add a photo to this gallery

Retrieved from "https://riordan.fandom.com/wiki/Hephaestus%27_Cabin?oldid=535104"
Community content is available under CC-BY-SA unless otherwise noted.