The Hydra is a vicious nine-headed monster that can grow back its heads.

The Lernaean Hydra was born to Typhon and Echidna. While not the most powerful of its siblings, the Hydra was a fearsome and vicious monsters with nine heads (at birth). The monster terrorized the Kingdom of Lerna, chasing all of the inhabitants away with the toxic acid and fumes that it spewed at them and killing livestock. When one of the Hydra's heads was decapitated, two more snake-heads would grow in its place.

As the second of his Twelve Labors, Hercules was tasked by King Eurystheus to kill the Lernaean Hydra. The hero eventually defeated the monster by having his nephew Iolaus cauterize each stump after he had cut it, then tearing off the immortal head with his bare hands and crushing it under a giant rock. After defeating the monster, Hercules dipped the tips of his arrows in the Hydra's bile, rendering the weapons extremely venomous. However, Eurystheus said that labor did not count as he had help, so he Hercules had to do an extra labor make up for it.

When Percy Jackson visits the Oracle of Delphi in the Big House Attic, he notices a stuffed Hydra head amongst the collected spoils of war.

When Percy Jackson sent Tyson to look for powdered doughnuts so he could talk to Annabeth, Tyson went out and came upon a Monster Donut store. Tyson, being a monster, was somehow able to summon the outlet bringing the Hydra with it. It was large and lizard-like, with long necks and nine heads to match. It had many rows of razor-sharp teeth, its hands were clawed, had a tail, and spat acid. According to Annabeth, another Monster Donut shop popped up every time it grew another head. She says that Hermes' children found a way to use the Hydra's life-force to make a new chain of stores. Percy initially tries to defeat it by slicing off its heads, but succeeded only in making more. Percy, Annabeth, and Tyson were saved by Clarisse who completely obliterated the Hydra with cannon fire from the CSS Birmingham.

Later, when Tyson creates a shield for Percy, one of his designs on it is of Tyson battling the Hydra as he holds aloft a box of Monster Donuts.

Percy fights a Hydra when he, Piper McLean, and Jason Grace arrive to rescue Nico di Angelo from the giants Ephialtes and Otis. During the fight, Percy attempts to find a rocket launcher that he'd spotted earlier, but he instead find a device rigged to launch all kinds of explosives. When Percy fires it at the Hydra, the monster is instantly vaporized by the blast.

Apollo tells Meg McCaffrey that the red-bellied hydra was one of the monsters that started to fade from mortals' collective memory. This resulted in them regenerating less often in Tartarus, so the gods have to let them breed and repopulate. A few thousand years ago, a proposed temple of Poseidon in Sicily had to be relocated because the land was found to be the nesting area of a red-bellied hydra. Yet, those kinds of hydra are not nearly as rare as Yales.

The Hydra is described in The Sea of Monsters to be a huge and scaly lizard-like monster with nine heads, each one diamond-shaped with a mouth lined with razor-sharp teeth. Each mouth spits toxic acid. If one of its heads is severed, the hydra grows two heads in the place of the lost one.

In The Sea of Monsters, the Hydra is seen wearing a plastic bib reading "I'M A MONSTER DONUT KID!"

In the attic of the Big House in Camp Half-Blood, a Hydra head was left as a spoil of war. This Hydra was defeated in Woodstock, New York in 1969.

Percy Jackson, Annabeth Chase, and Grover Underwood encounter the Hydra in the form of five Security Guards at the replica of the Parthenon in Tennessee, after Percy Jackson takes Persephone's Pearl (originally Poseidon's in the book) from Athena's statue. Ignoring Annabeth's warning, Percy cuts off each of the Hydra's Heads with Riptide, causing ten heads to regrow. Grover managed to defeat the Hydra using Medusa's Head - a possible reference to some accounts of Perseus slaying Cetus, the monster that Andromeda was going to be sacrificed to. It should be noted that the Hydra is depicted as breathing fire in the film instead of acid. After Percy cuts its middle head, two of the Hydra's head breathe fire. 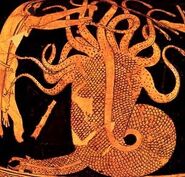