Hydrokinesis is the ability to manipulate and control water. This is a trait shared with water nymphs (Naiads, Oceanids, and Nereids, aquatic deities like Poseidon, Oceanus, and their demigod offspring. Zeus also has hydrokinetic abilities, though he only controls the rain and clouds.

Hydrokinesis is a very powerful ability to have. One with the ability can create, shape and manipulate water or anything liquid-based , inorganic compound with liquid, gas (steam, water vapor), and solid (ice) states, including changing them from one state to other. This involves water itself, ice in any form, sweat, blood, steam, water pressure, poison, and other variations. With this power, a user can manipulate water-related weather such as blizzards and rainstorms. Users can also control water in all three of its physical forms and even manipulate the liquids inside another human's body to unleash gigantic tsunamis and tidal waves, users can harden water into an almost solid shape, and can use this power to walk on water, by increasing the surface tension of the water to the point where it is solid enough for other objects to stand on. Users can also create extremely durable water shields and huge solid constructs that obey thier will. It seems to be an ability possessed by the children of Poseidon, and his Roman counterpart Neptune. This ability can also be possessed by powerful children of Zeus, and his Roman counterpart, Jupiter as they are able to create strong storms that can generate rain.

So far, the only major limitation of hydrokinesis is when used against certain beings (like other sea deities) who have a superior will over water and can wrest control from the weaker one. As well as being in a location where water is not abundant, or battle against a person whose ability can overcome or counteract water (e.g. Pyrokinesis).  Also it appears that beings with hydrokinesis can control or create ice to a certain extent. Seen when Percy used the ice and snow around him to make an icy hurricane, as he does during the battle in Alaska in The Son of Neptune. 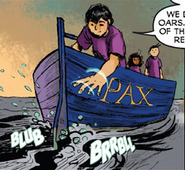 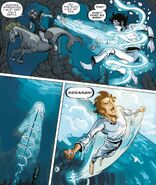