An Iris Message is a type of video message that is used by gods and demigods to communicate with others using a rainbow. The service is managed by the Greek goddess of the rainbow, Iris.

To send a message, one must first find or create a rainbow with Mist and then throw a golden drachma or anything with a good price into it, saying or thinking very deeply:

"Oh Iris, goddess of the Rainbow, please accept my offering."

In The Son of Neptune, when they meet Iris, she tells them that the cloud nymph Fleecy will send an Iris message for them. Fleecy gives them a "direct line" with the saying:

"Oh Fleecy, do me a solid. Show (name and place of person)."

This is usually said aloud, though it works non-verbally as well. Then the caller says the name or location of the intended recipient. The way to end an Iris Message is to wave one's hand through the Mist, disconnecting the signal. Iris Messages can also be sent to gods, such as when Percy contacted Mr. D. This is odd, because in The Titan's Curse, Percy wonders if it is even possible.

In The Battle of the Labyrinth, Percy receives a "collect" Iris message, asking him to deposit drachmas in the image for each five minutes of conversation. This happens only once and the sender was dead, so it is not clear whether this is a unique event.

In The Lost Hero, Medea calls for an Iris Message with a diamond instead of a coin. This probably means that an Iris message can be activated using any object of value. Greeks use drachmas to activate Iris Messages because this was the Ancient Greek currency. It is implied in The Son of Neptune that Roman heroes do not use Iris Messages (neither Frank nor Hazel had ever heard of this method of communication) since Iris is her Greek counterpart, and by then Romans used more advanced methods, like giant eagles.

In The Son of Neptune, Percy tries to contact Annabeth Chase via Iris Message, but the Iris Message can't get through. It is implied that this is because Percy can't clearly remember the person he is trying to reach as Hera stole his memory and Hera herself had blocked the message. 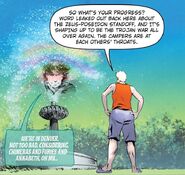 Retrieved from "https://riordan.fandom.com/wiki/Iris_Message?oldid=531197"
Community content is available under CC-BY-SA unless otherwise noted.