The Battle of the Labyrinth
The House of Hades

Kelli and Tammi went to Goode High School to kill Percy Jackson. Percy beat her trainee Tammi, but Kelli got away easily since she was a senior empousa. She stayed with Luke.

In Percy's dreams, Kelli always sensed that he was watching. She tries to bite him every time, causing Percy to wake up.

She then helped catch Percy, but she died in Daedalus' workshop when Annabeth stabbed her with her celestial bronze knife while trying to stop Percy, Nico, Annabeth, Rachel, and Daedalus from getting away on Luke's orders.

Kelli and a group of other empousai are walking towards the Doors of Death. Kelli talks about how when they get to the mortal world she wants to personally kill Percy. Eventually, Percy and Annabeth defeat Kelli and the empousai, with the help of the former Titan Lord of the Underworld, Iapetus (now known as Bob).

She may have been among the empousai who confronted the rest of the Seven in the House of Hades, using their charmspeak to counter Piper McLean's though that is unlikely because she was killed very recently.

While pretending to be a normal cheerleader, Kelli is an alluring valley girl, but is cruel and merciless in her true form. She also has a crush on Luke, describing him as "handsome".

Kelli is an empousa, who are the servants of the goddess Hecate. In true form, she has completely white skin, flaming hair, fangs, one bronze leg and one donkey leg, and red eyes. When in human form she appears as a pretty African American girl with curly hair. Percy describes the hair as "curly hair like Medusa's". 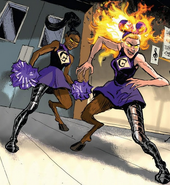 Retrieved from "https://riordan.fandom.com/wiki/Kelli?oldid=583094"
Community content is available under CC-BY-SA unless otherwise noted.