LGBT (also known as LGBTQ + , LGBTQA +, LGBTQIA +, LGBTQIA2S + , or LGBTQIA2P +) is an abbreviation for Lesbian Gay Bisexual Transgender, a community of individuals who identify as neither heterosexual (attracted solely to the opposite sex) and / or cisgender (identify solely as the gender they were assigned at birth). Aside from the aforementioned terms, there are multiple other sexual orientations and gender identities. Rick Riordan has introduced various characters under the LGBT umbrella, as well as some of the authors under the Rick Riordan Presents imprint.

Note: Only include sexual orientations shown by characters in the main literary universe or in Rick Riordan Presents.

Homosexuality is an attraction to those of the same gender as oneself. Non-women who are attracted to other non-women exclusively are are referred to as gay. Gay is often used by people of all non-heterosexual identities as an adjective or even label. Meanwhile, non-men who are attracted exclusively to other non-men are referred to as lesbians. Unlike gay, lesbian is an exclusive term, and cannot be used by those who do not fit its definition.

Pansexuality is an attraction to all genders specifically without preference. Some who fit the definition of pansexual will prefer to identify with another label, most commonly bisexual.

Note: Only include gender identities shown in the main literary universe or in Rick Riordan Presents.

Non-Binary is an umbrella term used to refer to gender identities that are not exclusively male or female 100% of the time. While pronouns do not define identity, many non-binary people prefer to use pronouns such as they/them or neopronouns, such as xe/xim. Many also use multiple sets of pronouns (eg. he/him and they/them.) The label is also used as a gender identity by some. Two-spirit or two-spirited is an umbrella term for specific non-binary identities from various indigenous American and Canadian cultures.

Genderfluid is an identity where one's gender identity changes over time, it could be between the two binary genders but may also include non-binary identities as well as, such as xenogenders and neogenders. The change between genders can occur at any time, sometimes occurring as frequently as twice in the same day, as rare as once a year, or anywhere in between.

Bigender is an identity where someone identifies as two genders at once, with or without fluctuation between them. In some cases of individuals fluctuate between two genders, they may manifest a differing persona depending on the gender they identify as at the moment, such as a masculine identity if male or a feminine identity if female. Individuals who experience this may also switch between masculine and feminine versions of their names, such as going by Michael if identifying as male or Michelle if identifying as female.

Queer is an umbrella term used to describe those who are a part of the the LGBT community who do not or do not yet identify with a sexual orientation or a gender identity. The term was originally an insult meaning “strange” or “peculiar”, but it has since been reappropriated as an alternative to the various sexual orientations and gender identities under the LGBT umbrella.

Nico di Angelo, in a relationship with Will Solace.

Will Solace, in a relationship with Nico di Angelo

Apollo, who has had many male and female lovers, including Hyacinthus.

Artemis, sworn to be a virginal goddess, though she almost developed a romantic relationship with Orion.

Hestia, sworn to be a virginal goddess.

Athena, also sworn to be a virginal goddess, though she has children purely of the mind.

Zeus, who has had many female lovers and at least one male lover in Ganymede, his cupbearer. 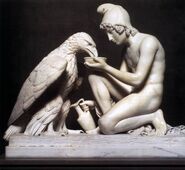 Hyacinthus, one of the few requited loves of Apollo.

Paolo Montes has expressed an attraction to males.

Josephine, in a relationship with Hemithea.

Hemithea, in a relationship with Josephine.

Commodus, once a lover of Apollo.

Lavinia Asimov, in a relationship with Poison Oak, a female dryad.

Poseidon, who has many female lovers and at least one male lover in Nerites, his charioteer.

Hippolytus, who loved no one in an attractive way.

Reyna Ramírez-Arellano, confirmed to be romantic asexual via twitter.

Brynne Rao, who has romantic feelings for both males and females. 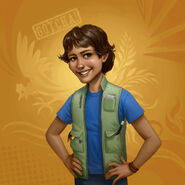 Sal Vidón, who is asexual. 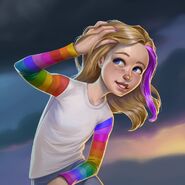 Emma Lockwood, who identifies as queer.