Riordan Wiki
Register
Don't have an account?
Sign In
Advertisement
in: Lares, Teachers, The Son of Neptune characters, The House of Hades characters
English

Lares (singular Lar) were guardian deities in Ancient Roman religion. Their origin is uncertain; they may have been guardians of the hearth, fields, boundaries, fruitfulness, hero-ancestors, or an amalgam of these.

Lares were believed to watch, defend, and influence everything that happened inside the boundaries of their location or function. Lares are classified as household gods, but it should be noted that some had much broader domains. Roadways, seaways, agriculture, livestock, towns, cities, the state, and its military were all under the protection of their particular Lar or Lares.

When compared to Rome's major deities, the scope and power of Lares were restricted but important, peculiarly for Roman objects of cult. Archaeological and literary evidence confirms their central role in Roman identity and religious life throughout the Republic and empire. By analogy, a homeward-bound Roman could be described as returning ad Larem (to the Lar).

In spite of official bans on non-Christian cults from the late 4th century AD onwards, unofficial cults to Lares continued until at least the early 5th century AD.

Lares mutter graecus when Percy Jackson passes by them. This shows that they can tell the difference between a Greek demigod and a Roman one. Later, a Lar, Vitellius, guardian of the fifth cohort, grudgingly allowed Percy to be in this cohort. 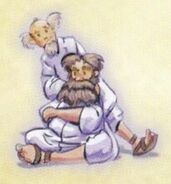