A legacy is a mortal who is a second or further generation descendant of a god, namely the children, grandchild, or descendant of a demigod. They may or may not possess similar abilities to their godly ancestors. Recognition of Legacies seems unique to Camp Jupiter. It is also stated that various emperors of Rome were Legacies. Only first-generation descendants of the gods attend Camp Half-Blood, although Camp Jupiter accepts legacies. It is unknown if Camp Half-Blood will accept legacies in the future.

Most likely, there are many more legacies than demigods in the world. Many demigods (not just Frank Zhang) are ostensibly legacies as well as half-bloods.

Legacies are shown to sometimes have the abilities of their divine ancestor, such as Octavian having the gift of Prophecy or the descendants of Periclymenus inheriting his shapeshifting abilities. While this is true of some legacies, not every legacy has the abilities of their divine ancestor. This is due to divine powers diluting more and more after every generation of reproducing with mortals, however, if a legacy’s parents are powerful enough demigods, then the legacy’s abilities will likely be on par with their half-blood parents. Androgeos, the son of Minos and Pasiphaë, and thus a legacy of Zeus and Helios respectively, was said to have tremendous athletic abilities.

It is presumed that legacies still attract monster attention while in the mortal world, just to a lesser degree. The amount of monstrous attention they draw to themselves would depend on how powerful they are and/or how watered down their godly heritage is.

In ancient times legacies were more common, with more demigods reaching adulthood and having children. While legacies are still fairly common among those with modern-day divine Roman lineage, they are a rarity among those with divine Greek lineage due to fewer reaching their twenties and beyond.

Legacies can sometimes suffer as a result of being the descendant of multiple deities or being both a demigod and a legacy. For example, Frank Zhang, a son of Mars and legacy of Poseidon was cursed by Juno and had his life force bound to a stick. However this is not always a case as Claudia, a daughter of Cardea and legacy of Mercury, appears not to suffer from being both a demigod and a legacy. This could be seen as a result of the Divine ancestry of the individual and the power of said individual's godly parent and/or ancestors.

The gens Julia of Rome

In ancient Rome, the family known as Julia was a powerful Patrician Roman family, who claimed descent of many gods. Some of the famous members of this family include: Julius Caesar, Augustus Caesar and Flavius Julius. They trace their lineage back to Romulus, son of Mars and Rhea Silvia, descendants of Aeneas. Others would claim they were related to Aeneas, who lead his people away from Troy and eventually founded the land that would become Rome. Others would sometimes claim to be related to Dardanus, a son of Jupiter and Electra. The claims don't conflict, since in the myths, Romulus and Remus are descendants of Aeneas, who is a descendant of Dardanus.

The gens Caecilia of Rome

In ancient Rome, the family known as Caecilia, a prominent Plebeian tribe, claimed descent from Caeculus, a son of the God Vulcan and the founder of the Latin city of Praeneste.

The kings of Sweden are believed to be legacies of Frey, a status that would apply to their modern descendants from various lines, including the modern Swedish royal family.

This also includes some members of:

Descendants of King Louis XIV of France (son of Apollo) are Roman legacies; included in this group are the Spanish royal family and other European nobles.

Nayéé Neizghani, also known as Monsterslayer, was one of the twin sons of Changing Woman, one of the Navajo Holy People. His descendants can either detect monsters, such as Bethany and Nizhoni Begay, or manipulate water, such as Mac Begay.

Claudia's Father
Add a photo to this gallery 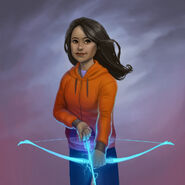 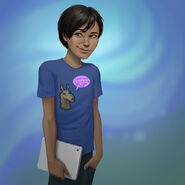 Mac Begay
Add a photo to this gallery 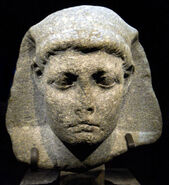 Caesarion
Add a photo to this gallery
Retrieved from "https://riordan.fandom.com/wiki/Legacy?oldid=585748"
Community content is available under CC-BY-SA unless otherwise noted.