Leven Rambin (born May 17, 1990) is an American actress who portrayed Clarisse La Rue in the film Percy Jackson: Sea of Monsters. She appeared in the 2012 film The Hunger Games as the character Glimmer. She has made appearances on All My Children, Grey's Anatomy, Terminator: The Sarah Connor Chronicles, One Tree Hill, Wizards of Waverly Place, CSI: Miami, and Chasing Mavericks.

Leven Rambin was born in Houston, Texas. She was engaged to Geoffrey James, a producer in 2009 in the Bahamas, but they broke up in November 2011. She now lives in Los Angeles and loves surfing. She learned to surf for her film, "Chasing Mavericks". Although, Leven and Geoffrey broke up, they are currently together now. They both own two dogs together. Leven is very close to her niece, Bella. [1] 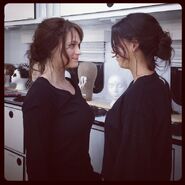 Leven as Clarisse, and her stunt double
Add a photo to this gallery


Retrieved from "https://riordan.fandom.com/wiki/Leven_Rambin?oldid=401900"
Community content is available under CC-BY-SA unless otherwise noted.