Lupa is the immortal Roman wolf goddess who trains Roman demigods in the ways of Rome. She trains the demigods at the Wolf House, then sends them to Camp Jupiter where they can join the Twelfth Legion.

Caretaker of Remus and Romulus

Remus and Romulus were the twin sons of Mars and Rhea Silvia, who were thrown into the Tiber River at the command of their great-uncle Amulius. They were saved by a great she-wolf who nurtured and raised them as her own. Having grown strong under her guidance, the twins would go on to destroy Amulius and establish the city of Rome.

Lupa contacts Jason Grace in his dreams to warn him about Gaea inadvertently. She also calls Jason their "Saving Grace," and curls her lips in a smile as if she just made a joke. Jason, not knowing his last name at the time doesn't see the humor but later realises it. It isn't until he learns who he is that he understands what Lupa had meant by it. Later, when Lycaon attacks Jason and his friends, he makes a reference to Lupa, saying that soon Lupa would have to think twice before attacking his pack.

According to Percy Jackson, Lupa promised him that he would see Annabeth Chase again if he succeeded in his quest. Lupa began Percy's "journey" by teaching him different skills. She taught Percy to sharpen his "homing senses" which evidently led him south and she might have helped him to perfect his "wolf stare". She also told Percy his name after Hera took his memory. It's said that her pack slowed down the army of Polybotes on their way to Camp Jupiter however she did not interfere directly with the final battle at the camp as it is not her way. "Conquer or die," was one of her mottos.

Reyna Avila Ramírez-Arellano mentions that in the legion's absence, she and her wolves are guarding Camp Jupiter.

Just as the legion is about to set fire to Jason’s funeral pyre, she and her wolves arrive and requests to speak to Apollo alone. She tells him to be strong for the sake of the legion and, if he can find the tomb and defeat Tarquin, he can call on godly help and start to regain his godhood. As he thanks her Lupa vanishes.

Being a Roman goddess, Lupa is harsh and judgemental towards people, mortal and god alike. She only respects the strong, as any demigod who she judges to be weak is devoured by her and her wolves. She doesn't seem to care about the hierarchy among gods, as she confessed to be indifferent to Hera while she was imprisoned in The Lost Hero (though she acknowledged her importance and the consequences of what would happen if Jason's quest failed).

Despite her militaristic personality, Lupa has a soft side. For example, while strict, she is not above making the occasional joke, as seen when she called Jason their "saving Grace" (a play on words in reference to both his surname and that he would help free Hera). She can also be a loving mother, as Percy claimed that she frequently tells her role in Remus and Romulus' fates, implying that she still is proud of them.

Later during the events of the Tyrants Tomb, Lupa's care for New Rome is fully shown when she when she attempted to assist Apollo on his attempts to defeat Tarquin,as seen when she worriedly refered to the Legions of New Rome as her "Pack" and took serious notice of how weakened their numbers had become due to the attacks and attempted to give Apollo as many needed hints to help him save the Romans. Lupa again exhibited her maternal side as it was noted by Apollo that she was furious at Jason Grace's death.However despite this, Lupa retained her stance that New Rome needed to be self sufficient and figure out their own problems despite the grave situation they were in.

She is described in wolf form with beautiful chocolate red fur (dark gray in The Tyrant’s Tomb) and eyes as silver as mist. She is also described as being very tall, taller than any human. In Jason's dream, she was seven feet tall.

Lupa made her first personal appearance in The Tyrant's Tomb . Before this, it was implied that she was quite powerful. For example, being the wolf goddess, she has control and divine authority over all the wolves in the world, except the lycanthropes, who are followers of Lycaon and not even considered fully wolves. It is implied that she is very strong and skilled in combat, as Percy (having been trained by her) knows what she is capable of doing, to the point of becoming horrified when Reyna claims that she and her pack are not enough to defeat Polybotes and his army (though this might be due to the Doors of Death being open at the time, thus preventing the Giant army from being permanently killed). She also has limited hypnokinesis, enough to contact Jason in his dream. 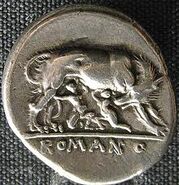