The Master Bolt is the symbol of Zeus' power, which all other lightning bolts are patterned after. It is the first and most powerful weapon that the Elder Cyclopes made for the Olympian gods.

Not to be confused with Pale Lightning.

Zeus' eldest brother, Hades, was very skilled in navigating under the earth, was able to lead all of his siblings into Tartarus, with the intention of freeing the Elder Cyclopes (Arges, Brontes, and Steropes) and Hekatonkheires (Cottus, Gyges, and Briares). All six of them were imprisoned in the maximum-security zone of Tartarus, surrounded by huge bronze walls, and a lava moat, guarded by fierce demons. Their guardian, Kampê, was the most ferocious and fearsome monster in all of Tartarus, and even Zeus, Poseidon, and Hades initially shuddered with horror when they saw the infernal monster for the first time. However, the gods overcame their fear, and were able to sneak in. Zeus managed to talk to the Cyclopes Brontes, and convinced him to forge powerful weapons for him and his siblings (which would be more powerful than Kronos' Scythe) behind Kampê's back. Together with his brothers Steropes and Arges, Brontes forged three incredibly powerful weapons, the first of which was the Master Bolt, which was given to Zeus. The power of the Bolt made Zeus' body tingle with energy, and he tested his new mighty weapon on a huge nearby bolder, which was instantly blasted to dust. Shortly thereafter, Kampê noticed the gods' presence, and proceeded to attack them. However, Zeus once more utilized the Master Bolt, and instantly incinerated the mighty monster by many simultaneous tremendous bolts of lightning.

The bolt itself is considered to be the most powerful of the three weapons forged by Arges, Brontes, and Steropes (making a mortal hydrogen bomb look like a firecracker in comparison), and all of Zeus' later thunderbolts were molded after it.

Shortly thereafter, Zeus successfully wielded his new mighty weapon during the subsequent 10-year-long war with his father and the other Titans. The Titans initially had the upper hand in the battles, since they were very skilled, and much more experienced warriors. Zeus, however, quickly became a skilled, dangerous, and ferocious warrior as well, and, together with his siblings and uncles, ultimately prevailed against his Titanic foes. During the final battle, Zeus used his Master Bolt to shear off the top of Mount Othrys, and hurl Kronos from his Black Throne, defeating the evil Titan King.

After the Titanomachy, the gods (who now called themselves the Olympians) chose Mount Olympus as their official residence, and Zeus as their King. Hence, while the Master Bolt remained Zeus' personal weapon in times of need, it also became his symbol of power, along with his pet eagle. He wielded it on multiple occasions, most notably while fighting Typhon, his greatest foe of all.

Percy Jackson is accused by Zeus of stealing his Master Bolt for his father Poseidon, as gods cannot steal each other's symbols of power, and Percy is a son of Poseidon and lives in New York City (where Mount Olympus is located). After discovering the theft, a devastated Zeus sent out Apollo, Athena, Artemis, and Ares, to search for his lost mighty weapons. However, only Ares was able to find the true lightning thief (Luke Castellan). Nonetheless, Ares did not turn Luke over to Zeus, and kept the Bolt and Hades' Helm (which Luke also stole) in order to start a war between the gods. As a result, Ares later told Poseidon that he suspects Hades to be behind the theft.

Because of this, Percy Jackson, Annabeth Chase, and Grover Underwood embarked on a quest to retrieve the Master Bolt. Shortly thereafter, Ares meet them, and gave Percy an enchanted backpack, which he had glitched, so that the backpack made the Bolt would appear inside it when he arrived in the Underworld, making Percy look like the lightning thief. Percy accused Hades at first but the Lord of the Dead denies this, saying that his Helm of Darkness was also gone. Percy retrieves both items and returns them safely after fighting and defeating Ares.

During the Olympian Council meeting, while arguing with Poseidon about where the Ophiotaurus should be kept, Zeus' Master Bolt appears in his hand, and fills the entire Throne Room with a strong smell of ozone.

Zeus used it repeatedly to attack Typhon, but while it nearly knocked the gigantic monster off balance, it only injured Typhon slightly, and he quickly regained his footing and continued attacking the Olympians.

Zeus is seen wielding the Master Bolt as he rides into battle with the other Olympians against the Giants at the Acropolis. He is seen using it to blast back the Giant King Porphyrion when fighting him alongside his son, Jason Grace. Shortly thereafter, a blast from the Bolt destroys the Giant King, after which a victorious Zeus clips the weapon to his belt.

The Master Bolt is portrayed as a shaft of crystallized lightning that can discharge bolts of electricity. Instead of being hidden in a backpack by Ares, the bolt was concealed in the handle of an expandable shield Luke gave to Percy for his quest.

It is a two-foot-long cylinder of high-grade Celestial Bronze capped on both ends with god-level electrical explosives. It is stupendously powerful, "makes mortal hydrogen bombs look like firecrackers" according to Chiron. When the Master Bolt is activated, the ends of the cylinder emit crystallized electric bolts, making it look like a classical lightning bolt.

The first of the weapons created by the Elder Cyclopses, Zeus' Master Bolt is possibly the most powerful weapon in existence. In The Lightning Thief, Chiron mentions that it is after this bolt all other lightning bolts are fashioned. In Percy Jackson's Greek Gods, the Master Bolt is called the "nuclear arsenal of Mount Olympus." Zeus' entire body tingled with power when when he first touched it.

In The Lightning Thief, Ares claims that the backpack he gave to Percy was the Master Bolt's sheath, only morphed a little bit to disguise it. It is unknown whether the backpack was an actual sheath that belonged specifically to Zeus. According to Ares, the bolt is magically connected to the backpack/sheath and will always return to it when lost, much like Percy's sword. This heavily implies that the sheath was stolen from Zeus. In The Blood of Olympus, however, Zeus is shown to simply clip the Bolt to his belt when not wielding it. 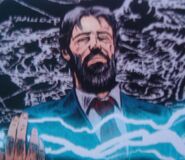