Medea was the Princess of Colchis, the land that held the Golden Fleece during the time of the original Jason, as well as a powerful sorceress. After the Doors of Death were opened, Medea returned to the land of the living, but was killed again. Medea was once again resurrected before the Doors were closed and allied herself with Triumvirate Holdings.

As a descendant of the Titan Helios, the niece of the sorceress Circe, and a priestess of the goddess Hecate, Medea was a powerful sorceress renowned for her healing skills and her proficiency in using herbs and drugs.

Medea claimed that when the original Jason was sent on a quest to find the Golden Fleece, Aphrodite made her fall deeply in love with him. Medea's father agreed to grant Jason his request, but only if he accomplished impossible and deadly tasks. Medea instructed him on how to accomplish them, only if he agreed to marry her.

Later, with the help of Medea's magic, Jason was able to steal the Golden Fleece from the king and escape. Afterwards, she defeated Talos with magic by tricking the Automaton to taking his nail out.

Jason married her upon returning to Greece, fulfilling his end of the bargain. But after the death of Jason's uncle, Pelias, Jason left her in order to marry Princess Glauce instead. Glauce (also known as Creusa) was a daughter of Creon, king of Corinth. Medea was heartbroken by Jason's betrayal and wrought a terrible revenge. She poisoned Princess Glauce and the people of Corinth. In her anger, she even murdered her two children from her marriage to Jason. Helios, her grandfather, then sent a flying chariot driven by golden sun dragons to take her away to Athens.

Other references tell a different story. After obtaining the Golden Fleece, they went to Iolcos to renew the youth of Pelias. Aeson, Jason's father, was the rightful King of Iolcos but Pelias (his half brother and a son of Poseidon) usurped the throne. He sent Jason to find the Golden Fleece so that no one would get in his way of usurping the throne, and so that he would regain his youth. Pelias assumed that Jason would die in the mission and told Aeson about his intentions. In grief, Aeson drank poison.

Unexpectedly for Pelias, Jason succeeded in the mission, with Medea's help. When Jason and Medea returned, Pelias refused to give up the throne until he dies. That was when Medea tricked Pelias' daughters into killing him: she told them to cut him up into pieces and boil the pieces, assuring them that this was for restoring their father's youth. Jason was unfaithful to Medea and sought to replace her with Princess Glauce as his new wife. Medea murdered Glauce and, to spite Jason, killed their children as well. Then she escaped to Athens.

At Athens, Medea was married to King Aegeus and had another son, Medus. One day, Theseus came to Athens. Medea recognized him as King Aegeus' son and worried that Theseus would become king instead of her son, Medus. So she sent Theseus to capture the Marathonian Bull, an emblem of Cretan power. Theseus returned victorious, and sacrificed the bull. Medea then tried to kill him by mixing poison in his wine. Just before Theseus could drink the wine, Aegeus knocked the wine cup out of his hands. Aegeus recognized Theseus as his son and successor and became aware of Medea's deceptions. Aegeus banished Medea and she supposedly fled to Asia subsequently called Media, whose inhabitants thereupon changed their name to Medes. Eventually, she died, but no myths [1] ever explained the cause of her death.

Annabeth Chase tells Percy Jackson that they cannot fight Colchis bulls without Medea's Sunscreen SPF 50,000.[2] Circe also mentions Medea as a powerful woman that Annabeth should look up to. [3]

Dionysus mentions Medea as one of the people Percy should ask if he wants to know how heroes always betray women and confirm that heroes are a selfish lot.

Jason Grace, Piper McLean, and Leo Valdez come to her underground mall, M's, after following some venti, where Medea introduces herself only as the Princess of Colchis. She begins to show the demigods her stock of magic objects and potions. She shows a momentary flash of anger when she hears the name of Jason, same as that of the hero who betrayed her. Soon, Piper realizes that Medea is up to no good. When Jason and Leo seem to want to keep shopping, Piper notices that Medea is charmspeaking them into buying whatever she wants them to. Piper attempts to snap them out of it with her own charmspeak and the stories of the horrible things Medea committed in the past.

Medea is revealed to have captured Gleeson Hedge and the venti (caged in the bottom floor of the mall). The demigods ask for the price to retrieve the captives. Medea says the price would be quite high since the trade is unfair, and that the person buying the product is named Jason. She continues to charmspeak them to the point where they are barely listening to Piper. Medea tells them to chop each other into pieces so she could bring them back to life even stronger (the same way she killed Pelias). Leo and Jason pull out their weapons.

Piper gets Medea to admit that she can see the future. Medea reveals that she divined that Leo would rise up against Gaea, so she warned Gaea from the Underworld. This event set in motion the awakening of Gaea and the death of Leo's mother. As a reward, Medea was set free of the Underworld and allowed to return to the land of the living, as long as her mall remained underground so Gaea could keep watch on anyone that entered.

Eventually, Jason and Leo come to their senses. Medea immediately releases her two sun dragons on the two demigods. She tries to run away and Piper chases her. Piper fatally wounds Medea by throwing poisonous chemicals on her. Meanwhile, Leo summons Festus, who helps Leo and Jason to defeat the sun dragons and pick up the cages containing Coach Hedge and the storm spirits.

Just before the demigods escape, Medea cries out that she doesn't want to be abandoned again as she was by the original Jason. She almost manages to gain Piper's sympathy by offering to cure Jason of his amnesia. The demigods choose to leave Medea, however, when they realize that she is only trying to buy more time to destroy them. She is an agent of Gaea, and the one who Hera warned them about. As they fly away with Coach Hedge and the storm spirits, they look back to make sure the she isn't chasing them.

Later in the book, Aphrodite appears to Piper in her dream where she is shopping in Medea's mall. Aphrodite warns Piper that Medea will return later on, along with others.

After realizing that something had happened to Leo to do with Calypso, Jason remembers that Calypso is a sorceress like Circe or Medea, leaving Jason confused as to why Leo would be so sad if he'd escaped from an evil sorceress' lair.

Clytius mentions Medea to Hazel Levesque as a reason she should not trust the goddess Hecate.

Having been resurrected once again before the Doors of Death were closed, Medea forms an alliance with Caligula and begins plotting to turn him into the new sun god. To this end, she begins summoning the faded Titan Helios out of Tartarus and into a part of the Labyrinth that becomes known as the Burning Maze.

After Apollo states that the Triumvirate are not modern demigods, Rachel Elizabeth Dare asks if he means that they are ancient demigods that came back through the Doors of Death like Medea and Midas before dismissing the idea since Triumvirate Holdings has been around since way before Gaea started to wake up.

While Apollo, Meg, and Piper are exploring the Labyrinth, Medea flew on a golden chariot pulled by her sun dragons and tried to charmspeak Meg McCaffrey into taking her to be with her stepfather. She then explained how she was going to extract the last of Apollo's immortal essence, add it to leftover power of her grandfather Helios, and take the combined power of Apollo and Helios and put it into Caligula to make him the new god of the sun. She fought the daughter of Aphrodite but is taken out by a poison dart.

She is later seen in Caligula’s throne room, holding Meg and Jason in tornadoes and asking Caligula to perform the ritual. After Apollo stabs himself she and Caligula rush to perform the ritual before he dies. Because her attention is on Apollo, her tornado prisons start to weaken. She is then punched in the face by Piper and disappears in the wreckage of the ship.

After Apollo and company reach Herophile in her holding room, Medea arrives and begins to extract Apollo’s immortal essence. As Apollo recites a prophecy he seals the fires below them and Crest distracts her. Pushed to her limits, Medea stabs the Pandos and moves in to kill Apollo. Before she can however, she is stabbed in the back by Piper and pushed into her grandfather’s flames.

Medea is often shown as a vicious psychopath. She displays great ruthlessness and is willing to kill and decieve to achieve what she desires. Medea also shows that she is unable to get over past grudges, Jason's betrayal as a prime example. She displays the mentality that she is never at fault, and that others are always to blame.

In The Lost Hero, Medea is stunningly charismatic and persuasive. She was able to control Jason Grace, Leo Valdez, and even the McLean's assistant Jane. She is shown to be absolutely confident in her magic persuasion, completely sure that she'd succeed in the end.

In Percy Jackson's Greek Heroes, the goddess Aphrodite describes that she was heartless, cold, and power-hungry, similar to her father. She warns that, even under a love spell, she'd be as fierce in romance as she was in magic.

In Percy Jackson's Greek Heroes, Medea is described as being beautiful in a mysterious yet dangerous way, with shadow-dark hair that tumbled over her shoulders, eyes that flickered with knowledge of dark things, and a remorseless detached face that flushed like a girl's when she looked at Jason. She wore a black silk dress, and a golden necklace on which gleamed the symbol of Hecate - two crossed torches.

In The Lost Hero, Medea is described to look like a retired fashion model, with long dark hair swept over one shoulder, talon-like fingers with long red-painted nails, and a face that was gorgeous in a surreal super-model way. She wore an elegant black dress with diamond jewelry, and her voice was rich and exotic, with a pleasing accent.

After rising from the Underworld, she seemed to have a faint glow around her. When she got angry, her face would literally glow to the extent where one could see her skull beneath her skin.

In The Burning Maze, she still had that regal look about her and wore a black silk dress that rippled around her. She wore her dark hair in a braided hairdo. She no longer wore the crown as the Princess of Colchis, but instead, she wore a gleaming gold pendant of the crossed torches of Hecate around her throat.

As a powerful sorceress descended from Helios, the Titan of the Sun, Medea possessed the abilities of: 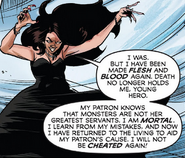